An introduction to the door management system used in Darkness-Within campaign as part of the role-playing game component. How did we implement doors and player interaction with the environment in order to add new gameplay in Dawn of War. 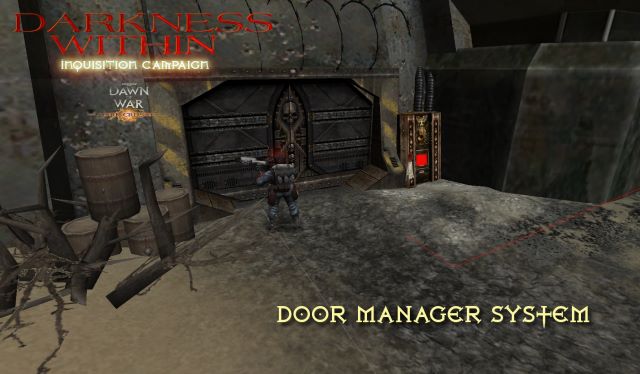 Doors in Darkness Within

Here are some news to tell you more about the campaign internal, i wont reveal anything about the plot or the story, this i hope you will discover when playing the mod, but I'm going to giveyou an insight about the way we implemented door and interaction with them.

An essential component of any rpg game is the old combination of the following "door-monster-treasure", yeah ! the old players here who played the ancestor of the tabletop role playing games will smile at this.

No infiltration mission would be complete without "breaking in" a secured place, and this involve either hacking the doorlock or smashing through it (the door, not the doorlock ...:) ) ! so we asked ourselves, how are we going to make this into DoW ?

here's the result, this system was implemented and finished for our campaign in April 2011 and thoroughly tested, it is working and implemented in-game in several mission today. Four months of works have been necessary from the design and concept to the point were the system was working and debugged. it was a good teamwork made possible by:
+ Titlam, DidleySquat and Jones created the models, the animations and all the necessary things needed to put them ingame.
+It was coded by Chiu ChunLing from the RelicNews forums who produced the main code,
+ Argonaut was responsible for the injection and implementation in the main campaign scar script, and i took care of the graphic design and texturing side of the project.

how does this work ?

only unit are given the ability to open doors, this ability icon is displayed in the unit menu, the mouse over the credential icon will pop-up the credential level of this unit. doors can be operated by the associated control panels, in order to operate a door a player must get a unit near the control panel and select it. 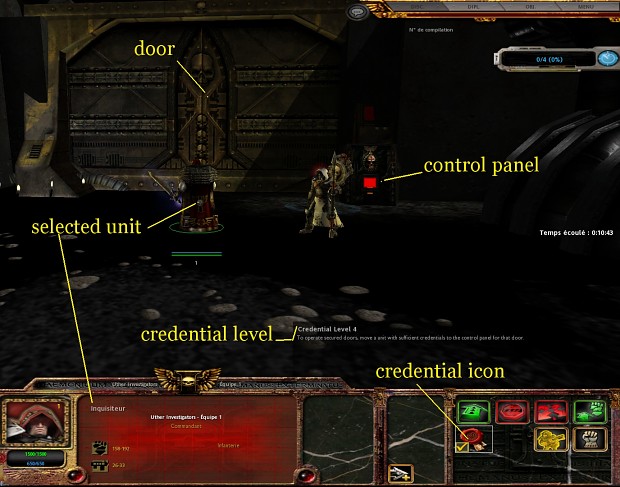 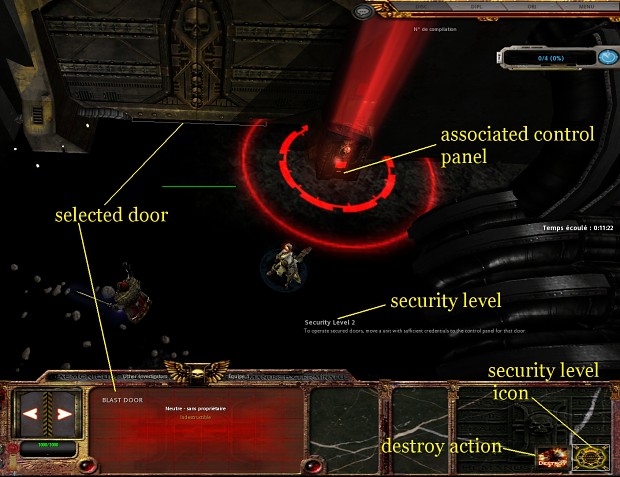 if the player decides to destroy the door he can do so by cliking the "destroy" button in the door selection menu. 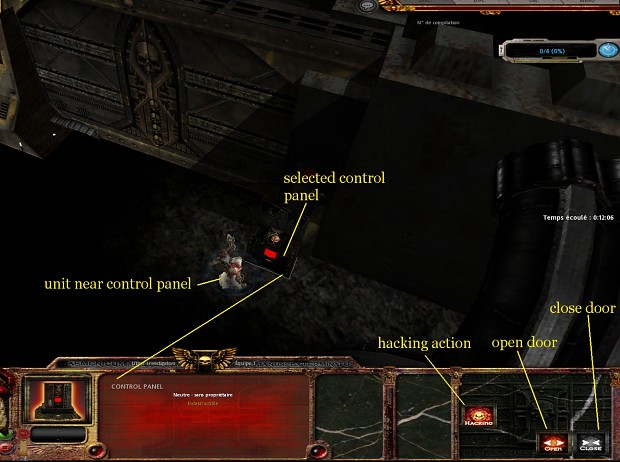 Only unit with security credentials higher than the door security level able able to open or close a door.
If a player does not have the code, only a techpriest knows the correct prayers and routines to hack a system. Therefore, only the techpriests security level needs to be matched against the security clearance level.
You can try to hack the door, by doing so the hacking unit will be removed from the player control during all the hacking time, when a techpriest is in communion with the machine spirit, he is blind to the external world. the higher the security level the longer the hacking time.
once hacked a door can be open/closed without problem or destroyed.

you can always destroy doors ! :)

This is cool on so many levels.

Nice control system, now i wish i had though of something like that myself

I forgot to ask earlier: destroying the doors will have any downside (like being detected by enemies)? Or is this something plot related that you can't reveal right now?

it depends entirely on the context, destroying a door could trigger an alarm and the security will rush to seal the breach or ...nothing would happen, so yes it is really plot related. You can also trigger an alarm if you try to hack a door. remember we can detect if an entity is under attack, destroyed or even if a given squad is in proximity to this entity. :)

:( I was starting to think i could always blow up everything to get were i wanted, lol.
Now out of the kiding part, it is really a nice addition to the gameplay. Maybe i should play more rpg to get this level of inspiration.

i was lucky to see and play the test map for this door system. it works very good.
now the great part is that the characters you control have different acreditation level, and JL said that it could be an objective in a mission to obtain such level, by meeting a non playing character or stealing the data in another mission. great rpg ideas because Dawn of war was very far from this.