Just giving you guys an update on what I have been up to this month.

Wow, so 2011! Still no space colonies, NASA is getting cut out of the budget and I still get sad that I will never see space travel..

In other new I have been hard at work on GRTS! 113 revisions later and no balance release! Yeah I know you guys are probably hating me about now for that. I'll explain what I have been up to.

I have been doing a lot of work to take that old ui and make it cleaner and more streamlined also adding support for the user to move things around. This comes from the Chili ui framework. The next release will have a skinned ui with colors for each faction. Namely federation will be blue and zeon will be olive with gold accents.

Some of you may be wondering what the new timer is about. In the current economy resources come in at a steady per second rate. I dislike this and feel it makes the economy feel spammy and somewhat chaotic. So I have broke up the income to happen every 10 seconds. Which means no matter what you have turned on, if you turn it off at the last second, conversions will not happen or will happen if you so need but you will get 1 chunk instead of the current trickle in economy.

I felt getting to g3 in 15 minutes or so was a bit ridiculous and allowed for no tactical play. So I am doing what I always wanted to do, I am taking the research and breaking it into trees where you will have to spend time to develop technologies and while a straight path to g3 gundam will be possible, it would be suicidally limiting if you are not in a team match. 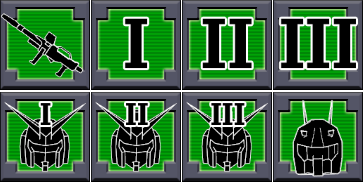 I feel this will greatly change the play dynamic. It should also reduce the frequency with which you guys see massive amounts of unit choices in your build menus. The tech items and ui still have to be done for this change but it will be a lot of work and it will require a lot of testing. So odds are next release will still have broken tech branches etc but I will try what I can to make it not too bad.

Rattle has been helping by remastering many of the sounds.

Yep, been doing a lot of this. This is not really interesting or new, just stats shift here or there. Important notes: hovertrucks, guncannons(mp and gm), zaku2fz have all received nerfs.

Keep playing and posting feedback guys, I am listening!

:/ would your enemy in skirmish/singleplayer or the missions be saddled with this limit?

This way we won't be screwed over with them having beam rifles and advanced MS's and we're still using RGM's and their cousins and praying to whatever higher being that we live long enough to fight back.

How did you find the models to these units?
Did you make them yourself or take from a game?