I am pleased to announce the development of the next Crossfire Mod for Freelancer. One year ago we have released Crossfire: Inner Core Version 1.8 which has pushed this game to it's limits and beyond. Inner Core showed how beautiful Freelancer can look like and how detailed such a complex mod can be.


I am pleased to announce the development of the next Crossfire Mod for Freelancer.

One year ago we have released Crossfire: Inner Core Version 1.8 which has pushed this game to it's limits and beyond. Inner Core showed how beautiful Freelancer can look like and how detailed such a complex mod can be.
While we mainly focused on content of the game environment and the graphical aspects with Crossfire 1.8, the version 1.82 that was released this summer dealt mainly with gameplay and performance aspects. The graphical improvements were just a small bonus for our great community.

We are at the point to say "Inner Core is perfect but it is not the end of the story".

The story always was most important to us. Crossfire was the first of the Freelancer Mods which focused on publishing story elements based on the original game and the developer notes.

The first of these elements was to tell a story based on the "version chapters" that give an overview about what happened in Crossfire Universe from one version of the Mod to the next. Later we have linked these chapters with ingame events and created the concept of a "quest system" that allows the player to follow a trace of breadcrumbs guiding through the Crossfire world.

With Crossfire 1.8 a third Story element was introduced.
Previously we only dealt with what happened and how it happened but the question for the "why" was mainly left open. A set of thirteen short stories in combination with ingame rumours answered these questions with the introduction of the the Crossfire: Inner Core Mod.

Crossfire 1.9 will go a step further.
Of course all existing story elements will be extended, a new chapter will be written, new rumours will be told, many new quest will appear and the question for the "why" also will be answered.
But - we will also release a full story campaign similiar to the original Freelancer storyline linking the different quests with each other preparing for the final fight.
Additionally we are going to introduce new story elements to the multiplayer of the game exclusivly to the multiplayer). 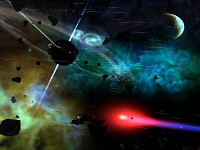 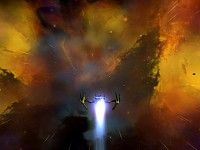 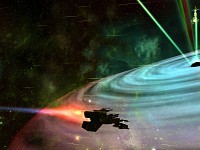 Crossfire: Dark Ages does mainly focus on improving what we already have, showing how the Crossfire Universe evolves. With the development we clearly have in mind that our fan community consists of the hardcore players which spend every free minute on the server and an extremly large group of players which simply like to play the singleplayer. Both kinds of players will get what they need. 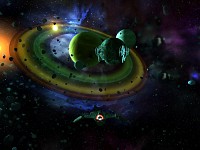 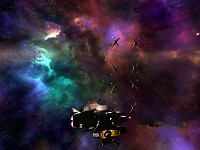 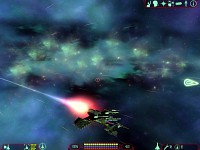 Like in every Crossfire version the player will be able to play through the original campaign of the game, now with the addition of a new crossfire campaign. Next to that we also keep the option to play the Open Singleplayer, a variation where the player can have fun in an open Universe without storyline.
Several new features will be introduced to both game modes, but those will be explained later.

Most important change for the normal singleplayer campaign is the starting balance. Crossfire is one of the hardest Freelancer mods and the feedback showed that the initial singleplayer balance requires some more balancing. The difficulty curve will definitly adjusted. Easier at the beginning, harder at the end.

For the multiplayer version of the game we have a full set of changes. Most of them will be explained in detail with later news. Today I just want to give a small overview what you can expect and what we are working on.
- new mission types
- a conquest system where clans can take control over stations and systems
- new quests based on our dynamic universe concept
- reactivation of the destructable universe
- balances to the mooring feature
- cloaking devices using energy crystals
- more gains by visiting the Inner Core systems
- prototype equipment that is getting build from different components
- prototype ships as reward for quests
- production facilities
- and much more 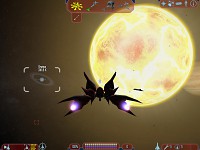 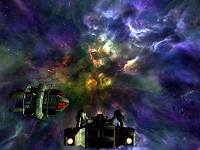 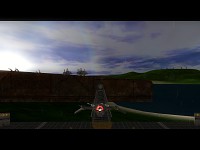 Like every previous Crossfire version we again intent to push the limits for the next one.
If you have suggestions and ideas feel free to submit them to www.swat-portal.com so we can consider and eventually develop them.

Please support our project and vote for us at the Mod Awards 2010. Thank you.

It's great to see this awesome mod continuing to develop, but I have a few questions;
-Will we be able to run the game in 1920x1080 (if it's even possible), and if not, can you put a windowed option in your launcher for people with true widescreen monitors (currently, in order to run it windowed, you have to bypass the launcher, meaning no multiplayer updates)?
-Are NPC ships still going to have a nearly unlimited supply of hull & shield repair kits (note: unlimited meaning 10+ of each on lvl 1 NPCs, which at the start of a game is a hell of a lot)?

yes support for such screen modes will come

working mining plants, a creation system, clan ownership system
geeze, after this next release we might as well rename Freelancer since ur doing everything u can to it short of making a standalone with source code
EPIC!!!!

the source code... sigh... we would do so much with it

I really like this mod and have been on the server but, only for a short while for my ping was so high, I just couldn't do anything at all but fly around. Even though I could do that, once I was attacked by any NPC's, it was futile for me to try and fight them off.

i support this mod 0 it's in my top 5 best mods ever. looove the space sim genre :-D

im new to this game and mod can anyone point me as to where to buy frigate sized ships?

It is compleated, but i don't see it.

hi!
fellow pilots, I had some trouble tonight, when I installed fresh freelancer, activated crossfire 1.9, then clicked "singleplayer" and...I see again dear freeport 7, and storyline runs from the very beginning!
is it normal, and should I play the whole "vanilla" storyline first, or I did something wrong?
many thanks
Streicher
ex-Vagabond