This is our first weekly update since we announced we were revamping the project. It will still be the same concept of killing Cookies. But, we are going to have a different map, different weapons, and a few flyable vehicles. The map will be an aircraft carrier featuring a day and night system (since it's going to take awhile to kill all those zombies). We are going to allow you to fly an AH-64 Apache Helicopter around and maybe an AV-8B Harrier II. We are also going to have a soundtrack and you might get to see a few clips next week. So thats something to look forward to. We might release a few pictures of the map next week, depending on its completion. If you have been watching our page you will know we got a new 3d Modeler, SnowLeopardJB. Here are a few models that he has created. 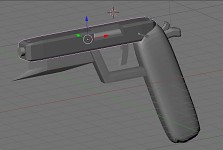 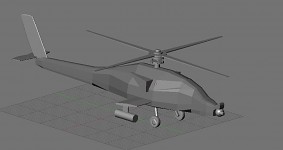 So when we got him as a modeler we also joined up with Radioactive Studios to make this game. You can see there website at Radioactivestudios.biz. Go give them a visit if you've got time. 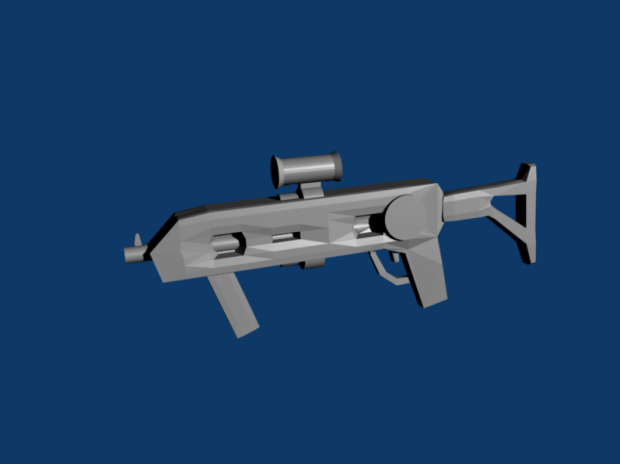 You might have also noticed that we have actually added ourselves to the iPhone group. Since we will also be porting the game to the iPhone. We will still have a PC version, but we are going to really have it as more of an iPhone game in our mind than a PC Game. We are going to allow people to create their own maps on the PC and maybe the iPhone depending on the way we work it out. I am going to try to make a mass tutorial guide when the game comes out so you can make your own maps with ease.

We would like to thank the community for their continued support and would like to encourage you to comment on our page. We'll see you next week.

Sorry but...it looks like you guys are going nowhere.

The models don't look very good to me, they are to low poly and there is loads of smoothing errors on them. Looks like they were put together to quickly, try take abit more time them.

Try not to take people to seriously :P, use there criticism to make your project better :P.

Models are interesting, but lacking any sense of experience. You've got some good ideas, but it would seem you're having trouble translating that to something physical. I suggest that you get a little more practice with your modeling software before you continue.

I don't have any experience with UDK, or Iphone development for the sake of this question. But i was just wondering how you guys will port it to the Iphone if your going to be dependant on UDK?

Moving on. The carrier model? It seems like it's pretty darn smaller than both the AH-64 and the gun thing, or is it just my eyes that needs a revamp? (comparing the grid) I'm no artist, or experienced modeller.. And to me it seems a bit overkill with the whole AV8B thing (I know it's a V/STOL plane)..

Anyways, keep up the good work! You sure have one heck of a weird idea, nice!

I am one of the lead developers on the project. I would like to respond to all your questions. We can't have such hi-poly models since it will be on the iPhone an we don't want to fill up an iPhone by just this one game. We also need things to run. To see what the iPhone can run in models you should go download the Epic Citedel app from the app store. To answer how it will be ported to the iPhone and iPod touch you can go look at this news article on the udk website : Udk.com. Thank you. I accept your criticism, but if you read the very part at the top it said we just started over again. We restarted the project.

Of course, you can't. But the criticsm isn't focused on the fact that you are using low-poly models (that's pretty standard for a game), but on the fact that they don't seem suited for a game at the moment. I know you have just restarted the project, but don't you have som concept art etc. to showcase instead of some half-finished models? That would sure keep the "negative criticism" away from your project site (if you don't like to have it on the site).

A: As of right now, UDK is a Windows-only program. iPhone support has been announced but we do not have a release date. Please drop by from time to time to see if we've announced support for other platforms.

I know that UE3 has been ported to the Iphone, but it's pretty early on and wouldn't it be going backwards to start developing for a platform that you don't have access to yet, using the tools you are using?

Why not use Unity? (as an example). Superb support, cheap, support for Iphone/Ipod right away (no waiting until Epic gets it done).

How's a shooter going to play out on the iPhone? That's like developing Crysis for the Atari.

There is, surprisingly, a number of shooters for the IOS platform. CoD: World at War zombie mode has been ported and works surprisingly well, the always superb game Wolfenstein has been ported, there is also a very nice FPS that is kinda like Unreal Tournament (can't remember the name). Great fun. Tho i agree, it's not just something you do. You have to take quite alot of things into consideration, especially the controls.

Well.. get another modeller, and wtf do you mean with "kill all those zombies", isn't the game about cookies?

I am the lead developer on this project. Here is a new link for you AirbagDK: Udk.com . We know that their are alot of problems with iOS games. But we all have many devices running these games and we are trying to be different. We have taken all things you have said into account and our modeler is going to remake the models, add concept art and I would just like to let everyone know we are making this in our free time, and we are not a triple a game studio. If you have anything else to say it would be nice if you talk about something different than the models. Thank you for your criticism and support.

Thanks for the link.
It's not that there are problems with the whole UE3 and iOS thing, it's just that it seems a bit like banging your head against a wall developing for a platform that's not supported by UDK yet. But, hey, that's just me. I just like that the tech i choose, supports the platforms which i develop for.

I look forward to see the concept art.

We know that you are not a AAA studio, after all it's IndieDB. "Making games the indie way."

It's hard to give you criticism on something ells than the models, since 75% of your post is images of those models.

You are right and we don't expect to be able to release the game till that releases and we expect the update for iOS around November. If you are tracking we will be adding the concept art during the week and we will put a few of the best in next weeks weekly update along with something for the map and if I have time the songs. Just to say you are one of the few people I met on indiedb who are really nice. Thanks.

Okay, neat. That'll definitely give you some valuable time.

Looking forward to it, and i'll definitely track this project to see where it's going.

Thank you :D I very much appreciate that.

I'm sorry about the models. They are in very early stages and I haven't had time to fix them yet. And also thanks for the criticism I will definitely take that all into account. I have to admit that we are a long way from being finished and that there is lots for us to improve.

Having said that, I would just like to point out that not everything has to have extremely high quality models to be a good game. Take Minecraft for example, it has a great idea, making it all come together into a great game.

Thank you all for your comments.

It just doesn't look good when someone, from a team, in an important position, says they're sorry for they're work. Show them you've got some ballzz (and skills)..!

I have to say, it doesn't look to bad, sure the renders are the best, but i'm just a sucker for all things zombie, that and graphics don't worry me, sure crysis looks great on the max settings but on my pc, Boom failure.

Anyway i'm rambling, this game seems so different and weird that it could work, good job guy's, can't wait to see what else you pump out.