Another new game mode added to Rising Son; revolving around controlling certain spots on the battlefield to perpetuate specific bonuses each spot grants.

As much fun as it is making new maps for this expansion to Dark Times, I also want to make sure that it has some unique gameplay additions as well. If you've played the first release of the mod, you're probably familiar with "wave mode," the one-on-hordes game mode. It was - to my surprise - probably one of the most popular additions to the mod, which I think underscores the value of trying something new.

The first major gameplay change I've made for Dark Times II is the addition of "control mode." Unlike wave mode, which is a fairly scripted and fit-to-the-map mode, control mode is a much more flexible mode (like the stock game modes), and as a result it will be appearing on every map added to the mod.

Control mode is at its core a team deathmatch. A limited number of reinforcements are given to each side and the only way to win is to eliminate all the reinforcements. There are fixed spawn points for each team, like the stock "assault" mode. What's new in control mode are a set of "control points" (usually four to six) scattered around the map. These are points that can be captured like command posts in conquest mode, albeit more rapidly. 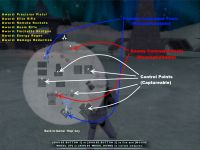 Why capture control points? They don't contribute to any sort of objective, and you can win without bothering to capture a single one. However, it's in the best interest of a team to capture (and hold) as many control points at one time as possible, because the control points offer a substantial bonus to whichever team holds it. 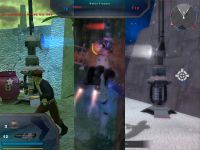 The control points can grant one of five bonuses - a small, perpetual health regeneration, a rechargeable shield, a faster energy recharge rate, the hero for the team (this is the only way to have a hero on the field in control mode), or a instant boost to the team's reinforcements. Each of these bonuses is granted when the control point is captured and removed when the control point is lost (with the exception of the reinforcement boost - it isn't a perpetual bonus and doesn't need to be taken away). 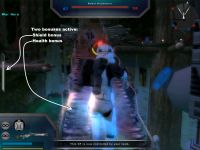 The control points are in fixed locations on each map, but their effects are randomized each time the map starts. Since the control points are able to be captured so quickly and since defenders don't spawn from them, it will be a rare occurrence that one team will be able to hold all the control points. The key to winning in control mode is to figure out which control point grants what, and prioritize which points to hold (for example, perhaps you are okay ceding an energy boost to one team, but you want to hold on to the shield bonus). 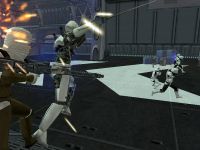 Because control points are effectively neutral, a control mode battle will tend to be more hectic than a conquest battle, as groups from each team will converge on each other often. It's a fun mode and a great way to pick up the pace from a perhaps-slower conquest battle while still keeping the element of teams in play.

Concerning the reinforcement boost control point, isn't it possible that this mechanic could be exploited?

Let's say a player playing on the Empire's side captures a control point which holds the aforementioned bonus, the team gets the reinforcement boost; then he intentionally retreats from that control point, ordering other players or AI controlled soldiers to follow him, the Rebels come and take the point, granting a boost for them as well, but then, the player and his allies come charging in and take the control point again, granting yet another boost for their team.
In the end, the Rebels got one reinforcement boost, whilst the Empire got two.

The net effect is still +10 units for one team.

Also, it's unlikely you'll move all your friendly AI away from the post - AI goals aren't just capturing posts, like in conquest, their goals include defending the captured posts - so even if you've captured a post, friendly AI will still move towards it.

I didn't use a big bonus since the control mode matches are supposed to move quickly. Plus 10 is still pretty substantial, but +50 or more would be a gamebreaker in comparison to the other bonuses.