Finally there is an update. The main topic is the Gewehr 41(W) which is a brand new weapon addition to the mod. Secondary, you can read some commentaries to older stuff in this post.

Hi all!
Finally there is a news post after quite a long pause. The focus of this post is concentrated almost entirely onto the new weapon - the Gehehr 41(W). Secondly, there is also some development commentary info. 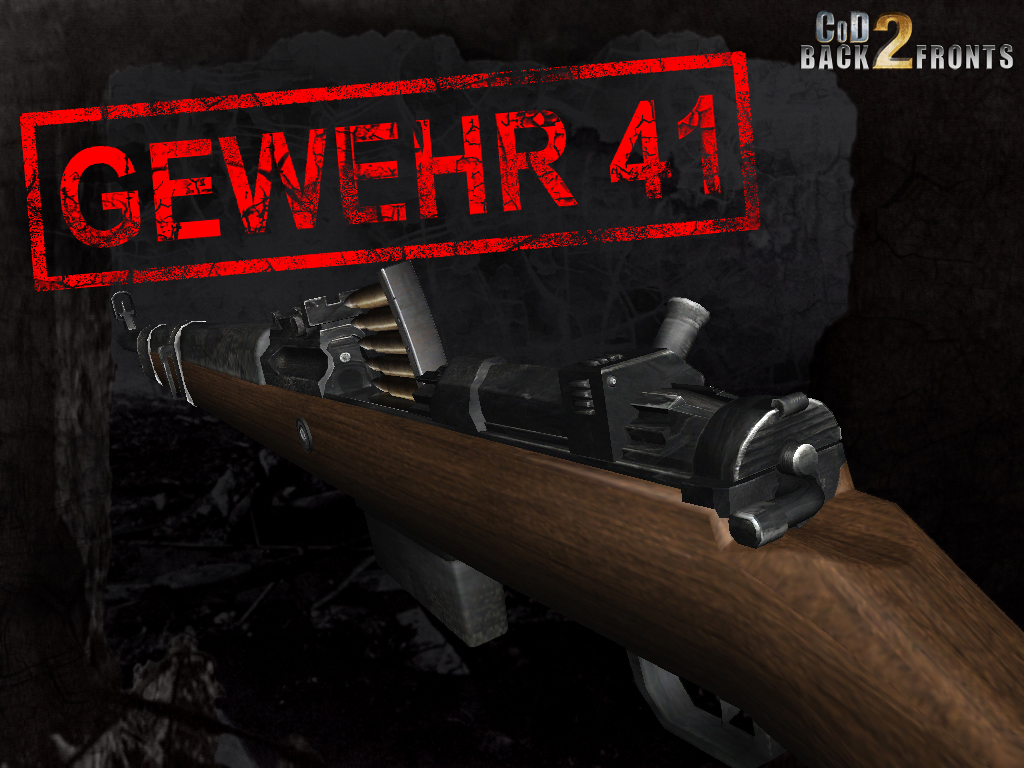 Modelling & animation
Gewehr 41(W)
I must admit that this weapon was in fact created just by a coincidence. I had a talk with a friend of mine (Perun58) about creating a G-41(W) for CoD2. The initial signal was like - how about combining the K98k and G-43 into a single model to make it look like G-41(W). The idea seem pretty great so I decided to put it into life. 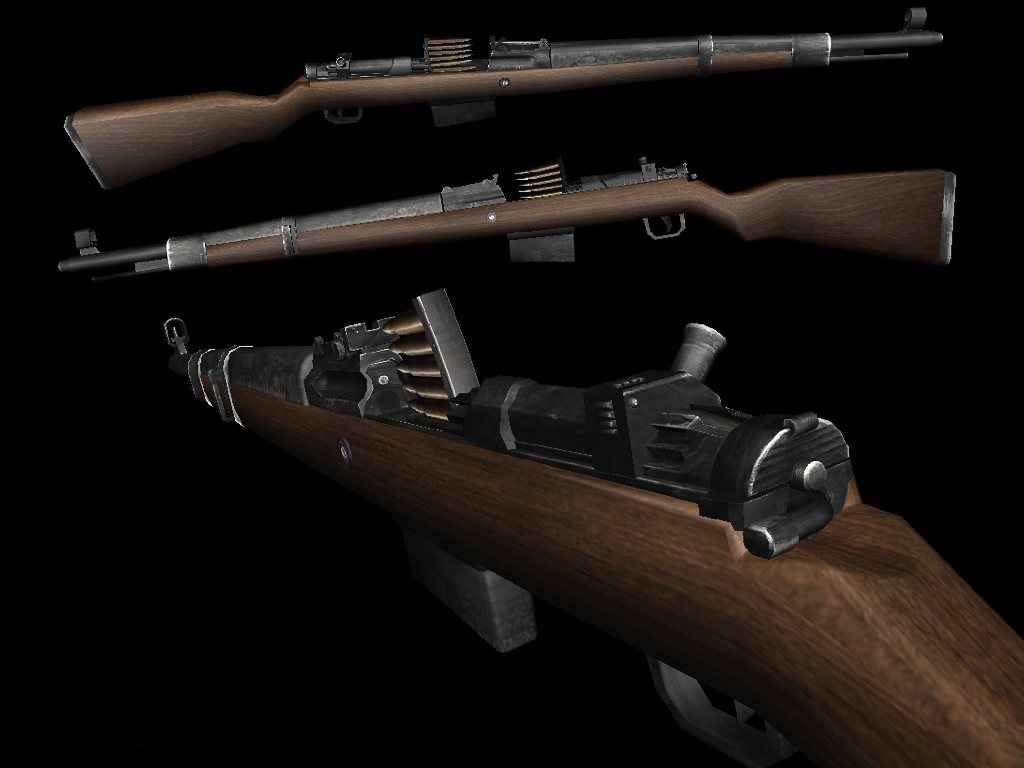 Anyway, here is some construction info: the wood and forearm are patterned over the K98k, the receiver, bolt, sights, butt end and trigger are patterned over the G-43. The internal magazine, strippers and ammo are brand new. Whole model uses the G-43 texture. The built time for the model was around 3days. The animation is all new and custom. The idea for it was taken from Lee-Enfield because it is also reloaded twice with a 5-rounder stripper. The built time for the animation was so far circa 5days.
Finished animations: idle, ads_up, ads_down, fire, lastshot, ads_fire, ads_lastshot, putaway, putaway_fast, pullout, pullout_fast, reload, reload_start, reload_loop, reload_end, melee.
Unfinished animations: partial reload, bayonet.
When I was making this stuff, I kept in mind maximal realism and sense for detail. So as a result when operating this gun, you can see the cycle of a round during firing, lastshot and reloading (see the videos or screnshots). For example, when a shot is fired - the spent round is ejected by the bolt outside of the gun, a new round pops out from the magazine and with the bolt closing it is inserted into the barrel. Same thing with reloading. In empty reload - when the last round is fired, it is then ejected from the gun and the magazine is empty, player then grabs 2 full stripper clips into his right hand, he inserts the first one, then he inserts the second one (the clip remains visible in the magazine), after the bolt is released it is clearly visible how the first new round comes from the magazine into the barrel.

Older development commentaries
Melee weapons
This is still mostly a WIP. There are 5 bayonet models - one for Italians (Carcano M91 bayonet), Germans (K98k SG84/98 bayonet), Russians (Mosin-Nagant M1891/30 bayonet), British (Lee-Enfield No4 bayonet) and Americans (Springfield M1 bayonet). Firearms that are going to be equipped with bayonets are these - Carcano, unscoped K98k, unscoped Mosin-Nagant, unscoped Lee-Enfield, both unscoped Springfields and Gewehr 41(W). The G-41(W) will be the only semi-automatic rifle that will be equipped with a bayonet (to compensate the slow reload).
Second group of melee weapons are knives. There will be 4 knife models - one for Germans (SG42 knife), Russians (SVT40 knife), British (Fairbairn-Sykes dagger) and Americans (M3 knife). Knives will be used as a melee attack with scoped weapons. I decided to do this because it will add a variety to the mod and also it makes the whole thing realistic (snipers do not bash with their precise rifles because they would harm the scope).

The unscoped Springfield comes into the mod in 2 different versions - the early 1903 and the late 1903A3 one. You can tell them apart easily by the sight (see pictures below). Other than that, there are no differences between them. They operate in the same matter as the standard German K98k bolt action. It is accurate and deadly. It is an excellent choice (along with the K98k) for snipers who can't find a suitable scoped weapon or don't want a scoped weapon. You can encounter this rifle in every American mission.
early M1903 Springfield (it has a V-notch sight)

Graphical reworks
This came along with the optimalization. Many older models and other graphic elements in the mod were reworked either to better look or to more historical accuracy. To name few changes - all scoped rifles have accurate historical reticles (btw, shooting with them is much easier than with all the previous versions), MP-40 and MP-38 can be clearly told apart, added MP-41, scoped Springfield reworked and equipped with correct scope and so on

Gewehr 41(W) looks too awesome, and you made it for like just over a week... fascinating...

Thanks! Things will go faster for you too after you finish your first weapon. Because after that you will have experience.
P.S. I have replied to the UV problem, check it out.

The M1897 Trench Gun can only be found in the American campaign? and the FG-42 will appear in which campaign?

Yes, trench gun will be only in American campaign since it was strictly a US weapon.
FG-42 will be present mostly in Normandy but I might add few of them to some Russian missions too. African maps won't have the FG-42.

Maybe you can do the Lee Enfiled SMLE MKIII, I saw many footages shows that lot of them been used by Brits in Afirca.

I am not thinking of the SMLE but I would like to create a drum thompson.

I gotta say, this looks great! The animation is flawless, I love how good the stripper clip reload style is on it.

This mod is so awesome! When the multiplayer part comes out i will launch a server with it.

It's a really awesome thing that after all those years you are still holding on to the development of this great modification. This deserves a big congratulation. Cheer up!