A surprise update from out of nowhere?! Today marks the first of a 3 part New Years update. Real Time sun shafts, new map media, and tons more inside.

Many of you know that Valve is a mod friendly company as shown by the release of Source SDK updates in a fairly consistent manner. However, for quite some time now each SDK update has broken most of our assets and delayed our development. We've spent a lot of time fixing it and in case of the 2007 branch not being salvageable, we (had) a fail-safe build on the Alien Swarm engine branch. For the time being, we're focusing on our Source 2007 branch. Suffice to say (to better get the bad news out of the way) City 17 is going to heavily rely on the eventual release of the 2009 engine branch for mods to give players the best experience.

We aren't filling our "Programming is more important than gameplay" quota nearly as well as our programmers would like. In the seemingly endless debt we've yet to fill comes quite a few new shaders we've been hard at work on in the passing months. Our Bean counters dictate this is quite enough to last us until City 17: Episode Three. (Projected Release date: 2048- 2018)

Put your shades on, kiddies. This isn't gonna be light on your corneas. That's right, City 17 now features realtime light shafts cast from the Sun and other large sources of light. These are absolutely realtime and will cast rays around any object put in their way. 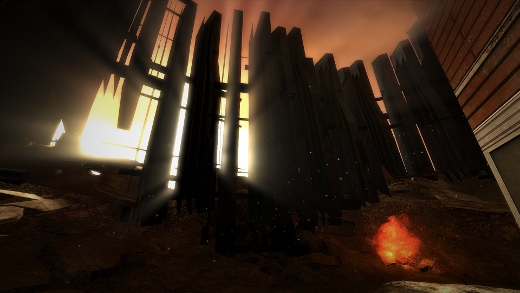 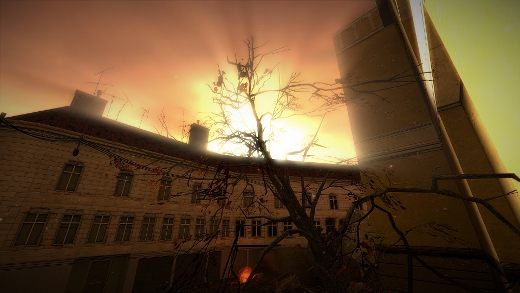 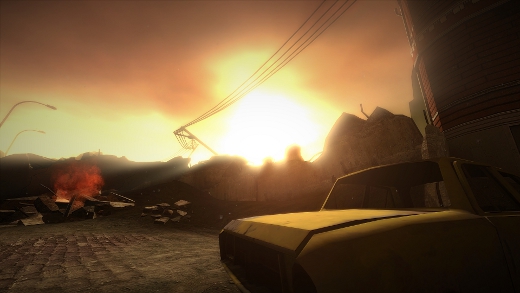 Vignetting was a definate need early in development. We knew the lack of HEV hud elements would make the screen fairly bland. Vignetting allows us to dim the edges of the screen realtime, and change the intensity of that dim over many instances. City 17 will use Vignetting for scenes, firefights, iron sighting, and atmosphere enhancement. In fact, every single shot in this entire media release has Vignetting applied to it! Just look for it!

City 17: Episode One features an enhanced version of Valve's bloom shader, which produces much smoother and more realistic results! All screenshots posted in this update feature this change!

Unsharp Mask is a high quality sharpening algorithm. In City 17, Unsharp Mask brings out texture detail that is normally hidden or lost. 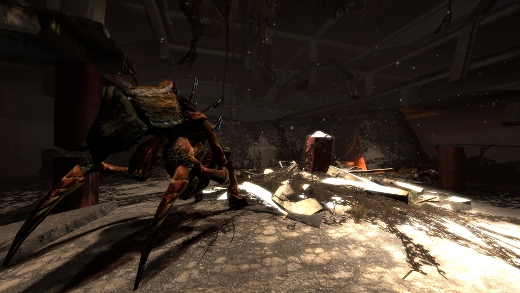 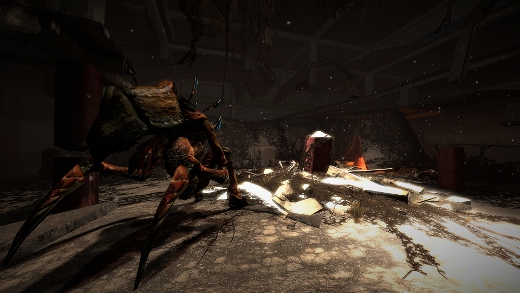 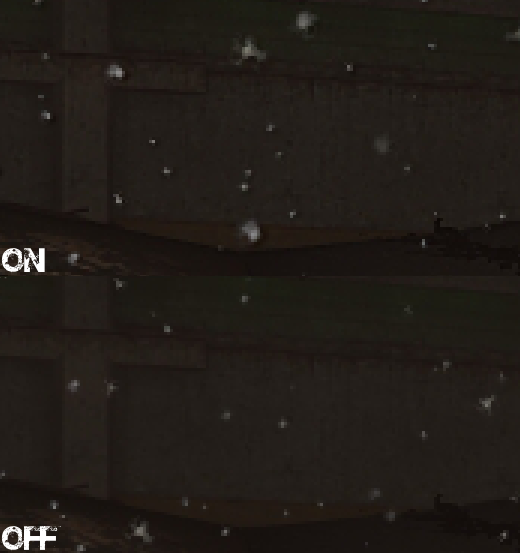 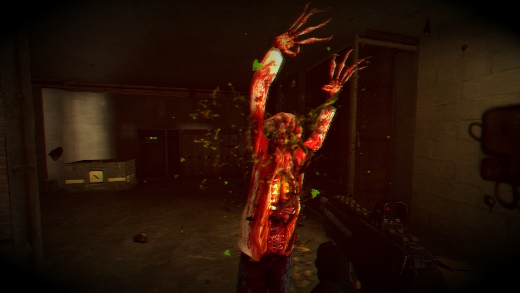 Chromatic Aberration as a pain effect. 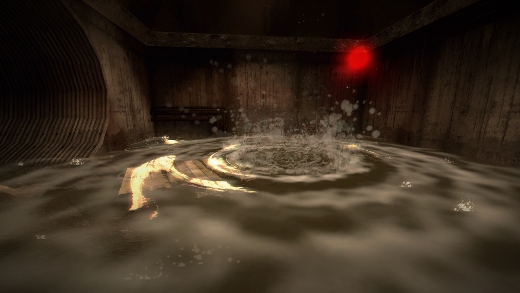 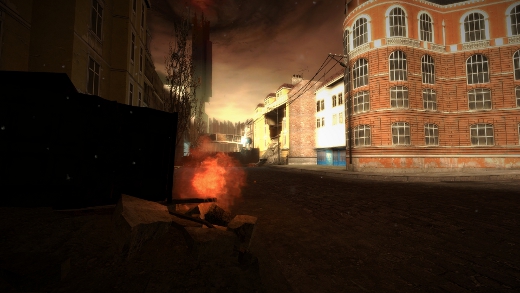 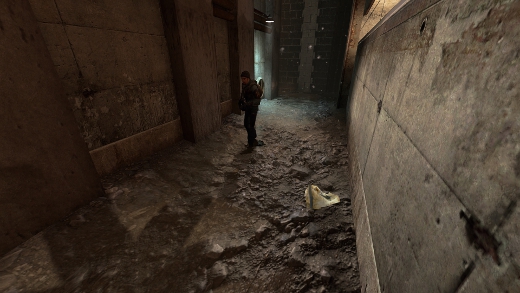 Screenshots don't do enough justice here, so we've made something special that we're saving for Day 3. You'll just have to wait! We've got a few more screenshots to hold you over, though! 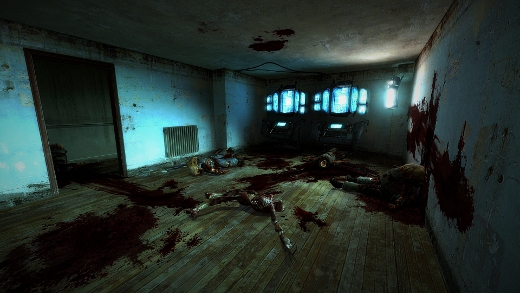 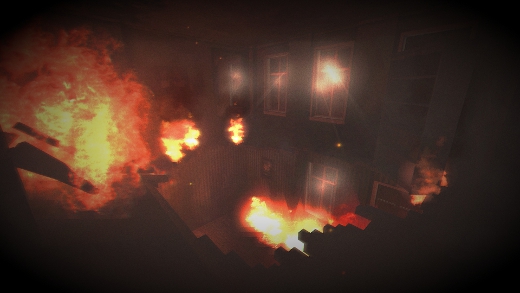 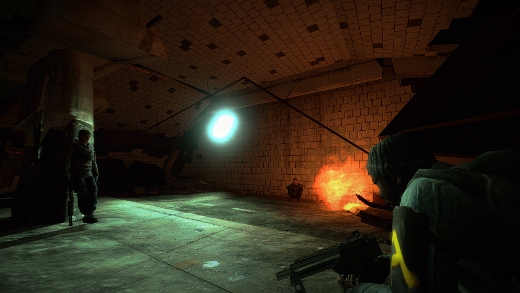 Apparently our Bean counters were wrong. Contrary to the beliefs of our heads of public affairs here at the Gear Development Studio, people actually like seeing gameplay and not just pretty screenshots. This was absolutely shocking news to us at the time. We actually ceased development for over 5 mont- a short while to discuss it!

Hot off the heels of this major development comes a redesign of an area thats been in the works for some time. As we've been drawing closer and closer to release we've been going over content, evaluating what we currently have and so forth. An area we developed quite some time ago and called "done" wasn't as up to par as we had thought. A lot at that time had changed due to a increase of new content coming online and fixing a large majority of the mod's pacing. We feel it's a pretty good update on a fairly old area, though we'll let you all be the judge via these comparison screenshots of "before and after". 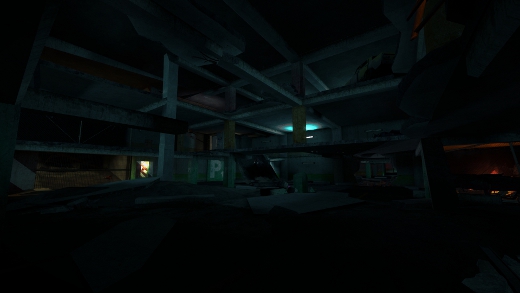 Lastly all of the shader features in todays update can be turned off at any time via our custom options menu in case awesome gives you seizures. We've built in different rendering modes for the shaders as well for varying performance in systems. These include the standard: Low, Medium, High settings.

That's it for part one! Drop us your thoughts in the comments below, or feel free to send us an email at gear.dev@gmail.com! This only marks part one of our Three-Part New Years update, come back later in the week for more!

awsome work , i am looking forward to playing through it.

Please open-source all you shader/lighting goodies :3

I've lost the will to mod. It's just too awesome. Anything I do now will pale in comparison to this.

My computer just came, ******, and **** all at the same time. It did this action because of the following reasons.

Amazing work guys, I also like how character model lighting is more harmonious with the environment. Are you guys going to be using cascaded shadows maps for sunlight in the future?

We thought about doing that for the sun, but the perf impact would be too high.

if you would get cascaded shadowmapping to work in source then you wouldn't have the performance problem.
I know someone who modified the shadow shader and made the shadows fully dynamic and receivable by anything.
here's a vid: Youtube.com
still no cascaded shadow mapping, but a good start

It's possible, but it's still not something we really plan on going and doing.

Ah, thank god finally, this year is coming to an end every soon as I am waiting for the next day of all underrated FPS sequel to come out including this project even though is not a real game but still deserved for an award in the somewhere 2011 although Opposing Force 2 will probably going to win but who care's will see about that and hey, are you going to announce the sequel after this mod is release ?

We may or may not. Episode 2 is still up in the air for us.

I love you guys. Great job so far.

Awsome, please dont die :( your mod is the bacon of hope in the pile tastless mods witch is HL2's moddign community.

The Bacon of Hope.

I think modelling temporal glare would benefit your mod's pursuit of more believable lighting:
Youtube.com
Mpi-inf.mpg.de
(Probably with a less detailed / more approximate implementation though! - also they're halos seem a bit too intense / visible but my eyes probably aren't the same as theirs!)

Or even without the temporal effects just regaining some of the glare patterns the industry seems to have lost when ditching sprites for realtime bloom would be nice. Maybe just a pick or gen a nice pattern and scale it with light intensity n wiggle it with the dot product of the eye / eye->light vectors.

Bloom does have it's place and is quite believable for larger areas but for smaller light sources or the glint on the edge of shiny surface like car paint or a polished metal a distinctive glare pattern would really add to the image.

We use sprites and glow based sheets pretty much near/on every light source. However HDR and bloom handles a lot of other light sources pretty well, such as florescent light fixtures, which normally don't have much of a glow, as seen in our shots.

How did you add the god rays ? Do you guys have full engine source-code.

Despite Source SDK providing shader authoring, effects such as SSAO or crepuscular rays can be expensive to render unless they are directly in the pipeline.

We're given everything we need. Very little of Source's rendering path is closed.

It's a screenspace shader, which means it's fully automated. All you have to do is specify the sun angle.

The scene is re-rendered in a render target, but where the world is black (sky is normal). Then this image is radically blurred from the offset where the sun is on the screen. Lastly it is added additively to the scene frame, thus giving this effect.

You have coding gods on your team, great work. I had no idea how awesome this mod is until now. Tracking ;)

just one thing about Chromatic Aberration.
the implementation looks is a bit wrong , because usually the image should be split in the two end colors of the light spectrum, and that colors are red and blue, but yours seems to split the image into red and a greenish color.
oh and the single color layers should be blurred a bit, the edges are to hard for Chromatic Aberration

Good point, but you are actually wrong -- I am using this exact shader for my own project, and it actually does split in red and blue. What you saw was simply a bad screenshot.

More than likely the color correction is ruining that screenshot.

Any sort of pain effect is hard to capture in a screenshot, you need a video to see it in action. I was basically left with the lesser of two evils.

Guess you'll all just have to wait for that trailer.

The only other screenshot with full frame chromatic dispersion is the one in the burning building. Take a quick look at that one, I think it came out better.

The others are done per object. We disperse the refraction pass of the water shader, and our spritecard/refraction shaders support chromatic dispersion per material.

WOW this is incredible! you guys are doing the greatest job ever! I'm so jealous of your skills ;) Happy new year.

So when is part 2 of this media update coming out? I'm checking the page twice a day for it!

It should be either Monday, or Tuesday. Gonna say myself, expect Tuesday.

I don't see the difference between the pre-processed and post-processed image.

I'd keep the Chromatic Aberration as a pain effect or on the fire, the water doesn't look that great to me. Or maybe it's just something better shown off in a video as I'm not quite sure what I'm looking at.