The announcement of the planned ending cinematic for the mod.

As you propably know , in the books , Kal Skirata wanted to desert to Mandalore together with Omega and Delta. I am currently making the ending map so I won´t have to think about it after making the other maps for the mod. I am planning to correctly portray the imperial commandos in the ending with white armor (most mods incorrectly portray them with black armors). Gonna gather some inspiration from this Republic Commando concept art : 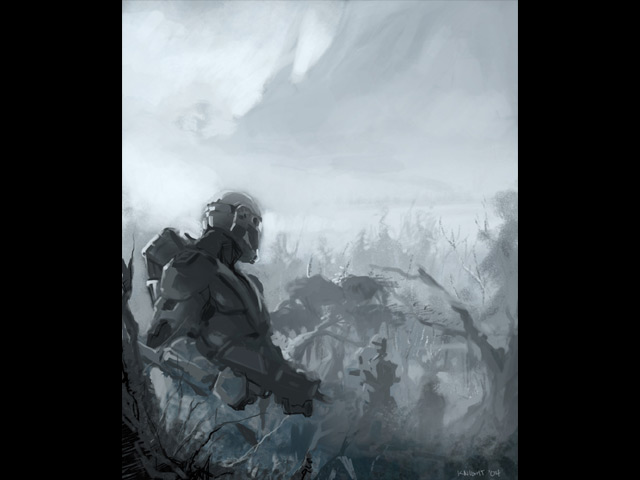 Just to explain you: I haven´t finished all the maps , yet. However , I want to make ending before I move further in mapping for the mod.

Delta stayed in the Imperial army in hopes to find Sev, I dont remember them having any intention of deserting to Mandalore without him

Basicaly , Delta stayed in Imperial Army , but they planned to defect after they find Sev. Omega squad defected right after Order 66 was issued , but Darman and Niner stayed and they were also planning to escape to Mandalore later.

The ending of the mod will take place a few years after Order 66 was issued. I assume they found Sev sooner or later , but books end shortly after the Declaration of New Order so we don´t know if Sev was found or not. Since the mod takes place in Lucasarts cannon , we know Delta never obeyed Order 66 and refused it. "Deltas , Order 66 is an invalid order" - RC 1138 "Boss" . I assume Sev was found a few months or years after the story of Order 66 ended. I still don´t know if I should also make "Rescue of the Sev" chapter. I will think about it.

There was an idea for a sequel to RepCom that involved Sev starting the Rebellion. In case you want to use that somehow.