Time for another devlog update! I've been super busy, so haven't had time to update as soon as I would have liked to. So there will be a lot in this update, but I'll try to keep it short.

The past weeks I have been working on a lot of GUI stuff, some performance, and other behind-the-scenes sorta things. Luckily, I have also worked on spells, enchants, and some other new mechanics that I can show off with gifs and images!

I did some work on the Warden class, because I felt many of her spells were not fun enough to use, and they certainly looked boring.

First off I took a look at the Embershot spell. It's an arrow that explodes, pretty simple and effective. How could I make that more fun to use? I know! More explosions! That's always the answer to fun. So I made the basic explosion somewhat smaller and less powerful, and then added a series of smaller explosions behind the point of impact. Not only does the spell feel and look more powerful, but it's also more useful! Because the smaller explosions always scatters behind the point of impact, you'll be able to hit more targets in a crowd chasing you. Given that the Warden's playstyle is a bit like hit-and-run, this spell now perfectly fits the philosophy.

I also took a look at the Arrowhail spell. It was a pretty simple spell; every 1 seconds, deal damage to all targets within a radius and create some arrow particles.
Boring! So I changed it, I made each arrow that falls damage targets individually, and I made fewer arrows fall and reduced the interval at which they spawned drastically.
There was now a continuous stream of arrows quickly shooting at the ground from the sky, damaging whatever they actually hit. But it still looked kinda boring, so the name of the spells being arrowhail, I added a light blue trace to the arrows, making it mimic hail a bit visually.
I was quite satisfied with the results.

Another class that required some love was the Warlock. His fire spells are all pretty cool and effective, but the frost & death ones? Not so much.
One of the frost spells, called "Frostblitz", was actually too effective, and I couldn't seem to balance it right, so I decided to change it entirely. Instead, I created a Frost Nova spell. A bit cliché, I know. But I love me some Frost Novas. This was also a good choice design-wise, as the Warlock had no real big area-of-effect frost or death spells, those were all fire. So I was starting to get some good balance between the two spell trees!

Secondly, I took a look at the "Skullblast" spell. A skull that chews through enemies in a straight line and damages whatever it touches. Pretty good, but not interesting enough.
I decided to add a poison debuff to it, so the skill will apply a small poison damage-over-time affect to whatever it bites, adding a new level of strategy to it. The important thing to note about poison damage is that it stacks... infinitely. As long as it is refreshed, that is! So Skullblast suddenly became a very viable spell for chewing (pun intended) down health on the larger enemies and bosses.

Sweet! Now there was one more thing that bothered me.. the final spell of the Frost & Death tree. It just wasn't appealing. At all. It was a spell to summon up to two "Plaguebearers" which were basically undead suicide-monsters. They'd find nearby enemies and blow themselves up to damage them, and apply a plague damage debuff. Sounds good in theory, but it sucked in practice. Away it went, and in came the "Wraithlord" spell.

This is a very cool spell that I am currently working on, so I am unable to show any gif of it, unfortunately.
What it does is to change the Warlock into a Wraith for a short while, drastically increasing the damage output, but also lowering the health substantially (cause, you know, undeads aren't very healthy).
Very cool.

During this week, I will take a closer look at the Templar and Berserker classes. They are in need of some love, too.

Enchants are great. They add customization and further randomization to equipment, and they can do some really cool stuff. I've had a lot of fun coming up with ideas for them, and so far the ones I've implemented are all pretty standard, but I got some cool stuff in store for later.
I've added pretty basic ones that increase your health, mana, damage, chance to find magical items, and regeneration capabilities. But I've also added some more fun ones that give you a chance to knock away enemies, poison them, burn them, shoot lightning between them - a lot of destructive (and fun!) stuff!
These enchants were made into basic character stats, so you can pretty much get them from anywhere; items, elixirs, shrines, spell buffs.. etc! Temporary and permanent.
To make these new destructive enchants a bit more interesting and unique, I decided to give each damage type special rules. This is what I came up with: 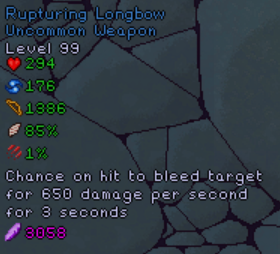 The Town, that isn't a town

In Chronicon there isn't your typical RPG town, but there is still a hub where you have vendors & services, and where you'll land between your adventures. Since the game world actually takes place in a simulated reality based on memories, you periodically return to the real world, the Chronicon device, to restock or get new assignments.
This area have had many shapes during the development process, but I am finally closing in on a final layout. I decided to make one waypoint portal for each world, or chapter, of the game, so you can easily select where to go. These portals are just recoloured versions of the basic waypoint portal, but in time they'll get their own unique look to blend in with the target environment.
As the game will go out on Early Access without all chapters present, there is a little goblin called Tinka who is tirelessly repairing the waypoint portals that are disabled! Don't bother him though, he really doesn't like you.

I also wanted a way to quickly return to the Chronicon, should you need to restock or sell loot, or if you just want to hang with Tinka for a bit.
So I added an item which will spawn a temporary two-way portal that will take you to the Chronicon and back to wherever you spawned it when you're done, and then it'll disappear. If you've played for example Diablo or Torchlight I'm sure you are familiar with this concept; the Town Portal! 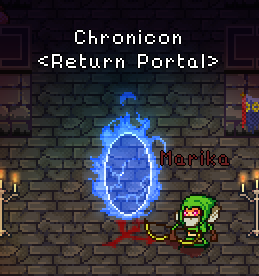 I've also been working on the difficulty settings for the game, and I've settled on using a total of 5 difficulties that can be changed when you enter the game.
The difficulties are:

I didn't want to lock difficulties, because you're not always looking for a challenge and sometimes you just want to blast through things, and making a separate character for that is just meh.
The higher difficulty you pick, the tougher the enemies get and the more champions you will face. The champions will also roll more powers on higher difficulties, making them extra dangerous! In return, however, you also get more experience, crystals (the currency of Chronicon), and a higher chance at getting magical items! So while challenging, it is also highly rewarding.

I've been working on making a new menu, as some of the recent images has shown!
I added in a ton of options and tried to make it as intuitive as possible to navigate, create new characters, load saves, re-bind keys, start multiplayer games, etc. It turned out quite well, and so I took the next step to allow the in-game pause menu to access the options and such, so you can change everything on the fly.
It was something I had never done before and I kept procrastinating it, but when I finally did it I was pleasantly surprised by how simple it was.

Anyway, that's it for this update. Next time I'll probably write some about the Templar, Berserker, and possibly the design of the next chapter.
See you then!