Chivalry is the next step in first person medieval combat. Building upon the success of Age of Chivalry and its unique "real-time strike" system, Chivalry will seek to fully immerse the player in the fictional medieval realm of Agatha that's embroiled in conflict. Pick up arms once again as an Agathian Knight or member of the Mason Order and take to the battlefield.

Chivalry promises to deliver the depth and strategic melee combat of it's predecessor Age of Chivalry. But alongside it, it will bring new features including character customization, greater siege weaponry and weapon sets, as well as a more fluid movement system. New content and high graphical fidelity will render the countryside of Agatha in a whole new light. Have a look at these screenshots, taken in-engine. 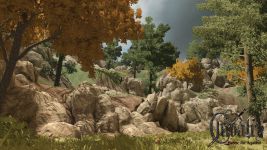 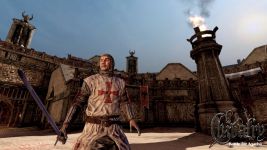 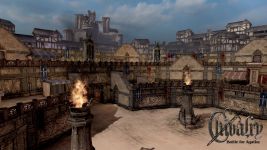 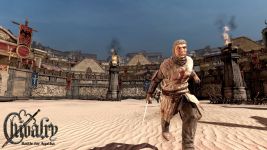 Chivalry: Battle for Agatha is built using the Unreal Engine 3 through the use of the Unreal Development Kit. For more information, please visit Chivalrythegame.com or follow us...

looks good. not particularly fond of the fantasy stuff though.

It is at least partially fantasy though as it's in the fictional world of Agatha.

But yes, if this is even half as good as AoC it'll be great. Good luck with the project.

It's "fantasy" in the sense that the game takes place in a fictional (ie. imaginative) setting, but it's not fantasy is the sense of a genre.

Unless of course he meant it in the former way; but in that case he'd be saying he isn't fond of anything that isn't directly based on real world events :)

But then in theory he -could- be fond of it since the game is based off real medieval warfare and equipment...

Age of Chivalry was amazing! I cant wait for this! :)

"Building upon the success of Age of Chivalry and it's unique 'real-time strike' system..."

YOU DO NOT TALK ABOUT KILLING GRAMMAR GNATSIES!

Played quite a bit of Age of Chivalry, really enjoyed it. I will definitely keep an eye on this. Looks very nice. I hope the fluid movement system is truly fluid. There are very few games that capture realistic movement and combat. Assassins Creed is a good example, having a non-button combo fighting system (Like Mount&Blade) but still that fluid feel like Creed did would probably make me cry with epic. All the best of luck :)

We did, one of the things we're aiming for is to allow the new game to be able to be picked up and played much easier than the first version, one of the ways we addressed that issue is by offering new game modes, more on this in the future.

I guess it won't be free, but there is no problem to pay for a high quality product. A lot of people will invest their time in this project, so everyone who enjoys the final game should be glad to pay for it.

I, for one, will gladly fork over my money for this. If there is a chance for these devs to make stuff that is (dare I say) even better than what they've made now (which will be quite a feat) due to having extra finances, then count me in.

i personally didnt like age of chivalry. but thats because i ******* SUCK at it. the games got a big learning curve to it and getting swarmed by 4 people while my tem mates do nothing to help never amuses me. but i do hope this commercial game sells well as im sure all of you will love it. hell ill probably buy it to just for the good ole "what the **** just happened" days.

This is a comment we got a lot, it's hard to enjoy a game that you simply aren't good at, especially if the combat mechanics seem sketchy or are confusing. If you don't know what your doing wrong and your continuously losing, it won't be fun. Age of Chivalry really suffered from this symptom and had a high learning curve and was not noob friendly as you said, this is on the top of the checklist for things to fix in the new game.

Very good point, so will you guys be creating some sort of training area to hone the combat mechanics? I think this is missing in just about all melee combat games.
Even if you had an instructor who was saying where he will attack, and what you need to do to block, that would be enough to give players a basic grasp of blocking.
Same thing could be done for parrying.

The opposite could be done for attacking, you would have to do certain attacks, and if you did the wrong one, you would be called out on it and reminded how to do the attack.

Anyway, that's just a small idea, but I think to avoid the frustration of your first time playing online with veteran players and getting your butt whooped, having an offline training mode would be very helpful to "break in" new players.

And great to see you guys taking the next step, going from modders to game developers :) While I wasn't 100% fond of AoC (mostly due to lag), I did enjoy it some times, and had some good memories playing the mod.
I am welcome to just about any type of game, but I love 1st person melee games since they are very underdone.

So I wish you guys the best with this project, I really like what I see, and can't wait to play it myself :)

looks good but =/ no source anymore =(

Yes we're moving on from the Source engine but look at it this way. By moving to the Unreal engine, we'll be able to provide you guys with more features and a better game overall and prettier graphics too!

Awesome,
I think it will be better than AoC.
And, I think its good that its isnt source anymore.
Always, if you minimized AoC, it closed, also I think the new graphics are cool^^
Anyway, I think they should still support Aoc and the players and make new updates for it.

Sad you're moving from on from source. (the close-combat system is a great "inspiration" for me) Though it's understandable because of the "commercial project" part. I would've loved if you had upgraded AOC original to something similar as Dark Messiah of Might and Magic, because that combat system was awesome for a source engine game.
But I guess it's too late now..

But good luck with this give us lots and lots of update candy!

U say it like that's not possible on another engine. Dark Messiah was well before orange box and ep 2.

I LOVE the style, especially the forest screenshot!

Aww, it's Unreal 3, why not use Source? You already have the code and some of the models you need. Just need to fix the code a bit.

And buy a source license, but it seems like they want to redo it all to commercial quality (Even though they were pretty good before)

What does "commercial quality" actually mean...

Will this also come up with SP?
Cause the game was just amazing and a slaughter maybe in the UK or France against AI-enemies would seem like a cool idea to me.

And even if there's no SP this game will kick ***!

There will not be a full-fledged single-player campaign, we are however not ruling out the possibilities of offline or co-operative play.

Offline version as in like Battlefield; just like regular multiplayer but have AI instead of players, also like Battlefield's co-op, which is the same as what I mentioned but allows for other players to be apart so both AI and player controlled.

Good going guys. And good luck in the new engine.

Helloes from an old dev and tester :)

Hey gex, thanks for the well wishes mate :).

wow good job guys, Ive played and have enjoyed the mod for a while, this should be really cool!

Now i'm interested! Make this better than Age of Chivalry and you have my soul.

about my "fantasy" comment. i just find it strange how videogames that are set in medieval times continue to include "imaginative" elements, and complete disregard the gold mine of history that is available to them.

like that arena setting they have a screenshot of. did you know there are thousands upon thousands of media online that show real medieval castles?

truth is stranger than fiction.

Clearly you've never read HP Lovecraft. And as said before, FICTION as opposed to fantasy. Which means they're not going to lift real buildings and such from the world, rather take inspiration from them.