A year has passed since the last update! Enjoy now one of the newly added major features of the Italian Wars - Ultimate - The Capitano di ventura script!

As a condottiere, even a minor Italian noble was able to build up a reputation as great commander and soldier, but also gain a fortune to finance his renaissance lifestyle. The system of condotta has evolved in Italy through several centuries and found its end during the Italian Wars. Nevertheless, it was at that time, a major income to minor Italian lords and rulers. Therefore a very important aspect, which found its representation in our Condott-Script! Please enjoy the latest preview for the Italian Wars mod! Buona fortuna condottiere! 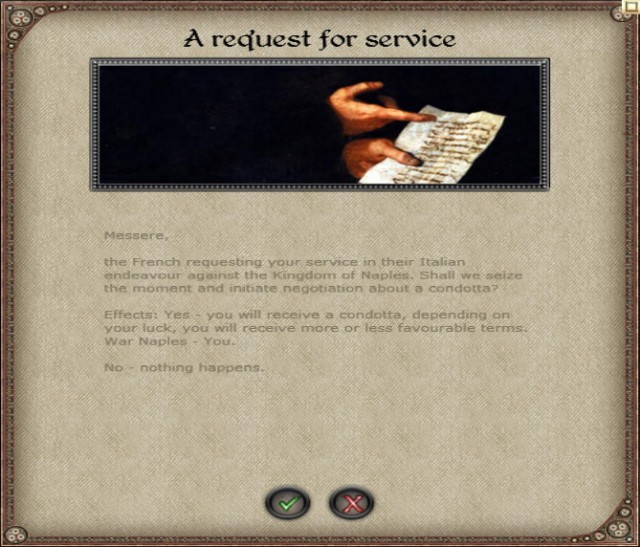 Of course you are happy to sign up and start negotiating your condotta! 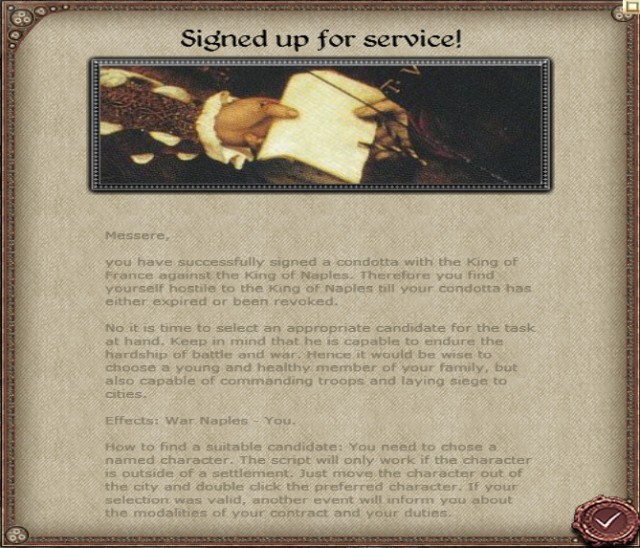 Naturally, you need a suitable candidate for this endeavour.. so you select a character fit for the job and proper age. 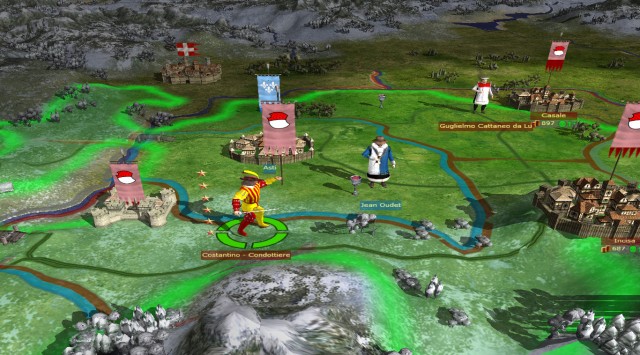 Now you have your condottiere! The condottiere has several duties, in order to please is employer and bring honour to his family. 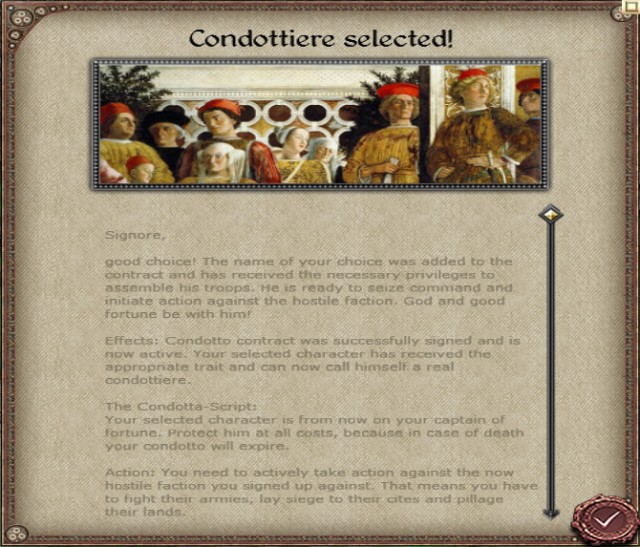 Signore,
good choice! The name of your choice was added to the contract and has received the necessary privileges to assemble his troops. He is ready to seize command and initiate action against the hostile faction. God and good fortune be with him!\n\nEffects: Condotto contract was successfully signed and is now active. Your selected character has received the appropriate trait and can now call himself a real condottiere.\n\nThe Condotta-Script:
Your selected character is from now on your captain of fortune. Protect him at all costs, because in case of death your condotto will expire.

Action: You need to actively take action against the now hostile faction you signed up against. That means you have to fight their armies, lay siege to their cites and pillage their lands.

Action points: At the start of your condotta you have received 10 action points, these points will decrease by 1 each turn in case your character stays idle. Idle means not performing on of the following actions:

In case you should drop below 4 action points you will receive a warning message by your employer faction. In case your action point hit 0 your condotta will be revoked and your reputation will suffer.

Condotta Expires: Your condotta can expire due the following reasons:

Payment: Your employer will send you now quarterly payments according to your negotiated terms. Be aware of the Renaissance people's habit of paying their debts....

One last piece of advice, even if your own faction has agreed to peace with your hostile faction but your employer did not, the condotta still we be active. Therefore you are still liable for not taking action.

Well, surely the danger you put your family member in is worth some money. Indeed it is, your legate was able to negotiate a prestigious condotta for your character. You can count yourself lucky, next time the terms might not be so favourable. 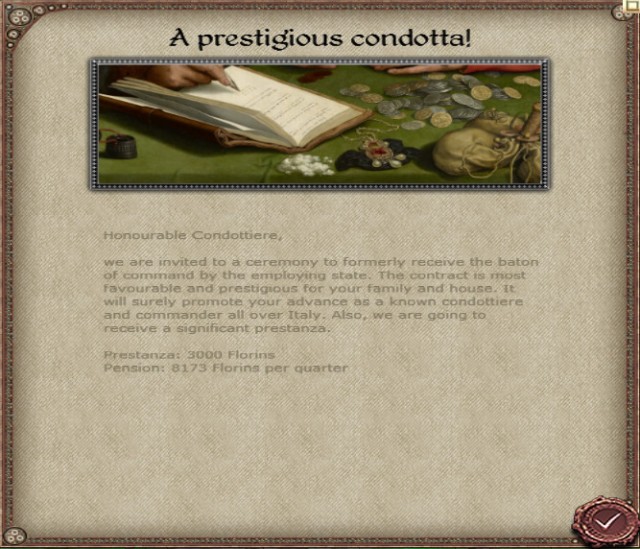 The character receives of course an appropriate trait and gains several skills for signing the condotta. 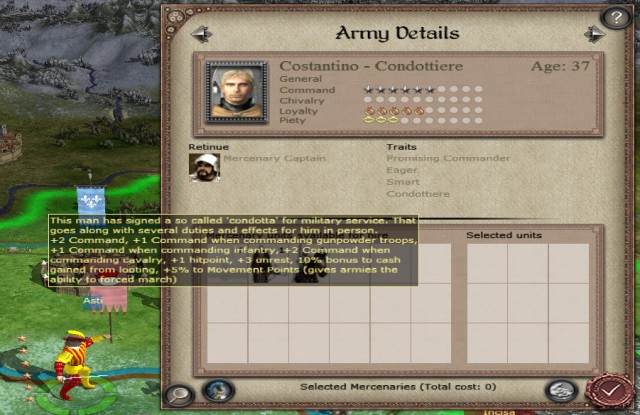 It seems your employer is quite flexible in terms of paying your services.. well, he luckily paid you last quarter. Let's hope this was just a misunderstanding. 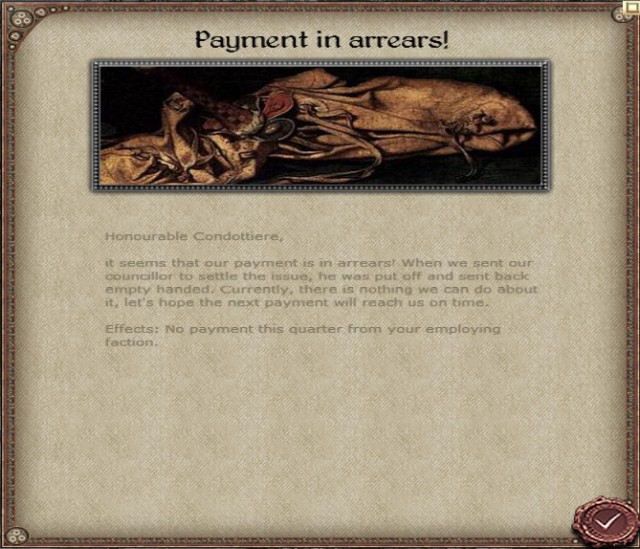 As things stand, your action was obviously too little. Your employer demands that you finally take the field against the hostile faction you signed up for. 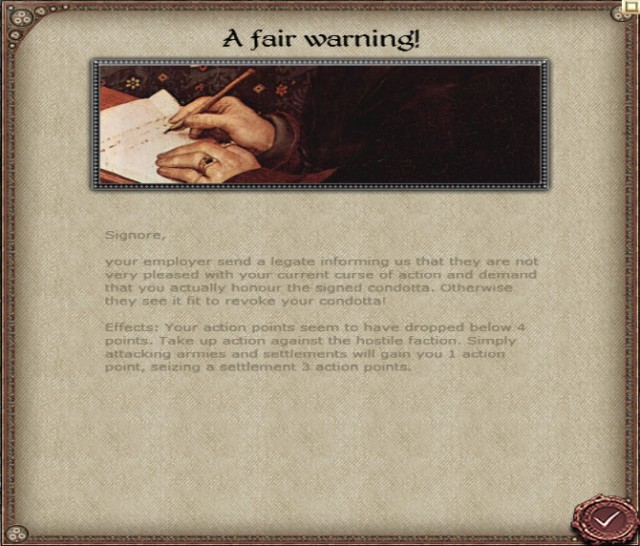 Oh shoot, you have failed to fulfil your duties as a condottiere captain.. the consequences are quite severe! 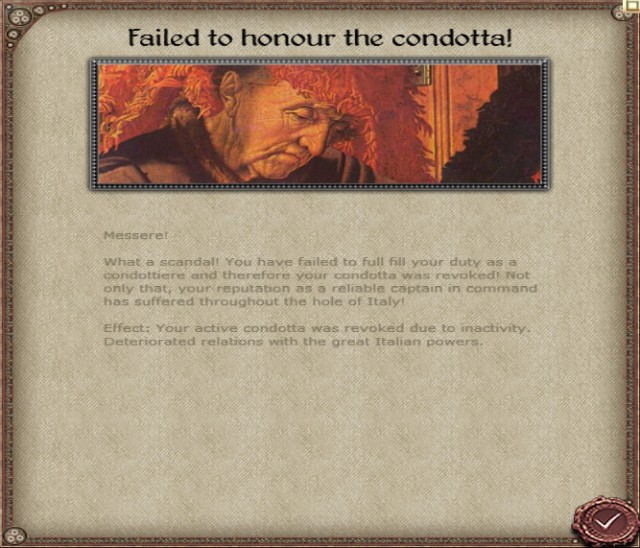 You were a successful condottiere, but your services are no longer needed and therefore your condotta has expired. 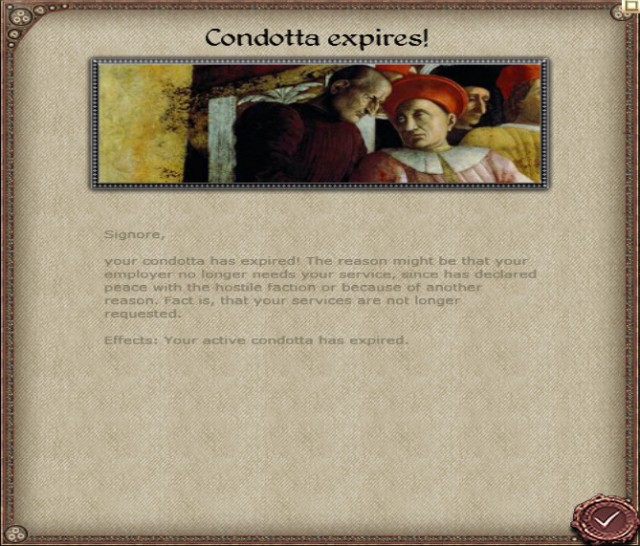 As a result of his campaigning in the field your character was able to secure some skills, even he is not in active service any more. 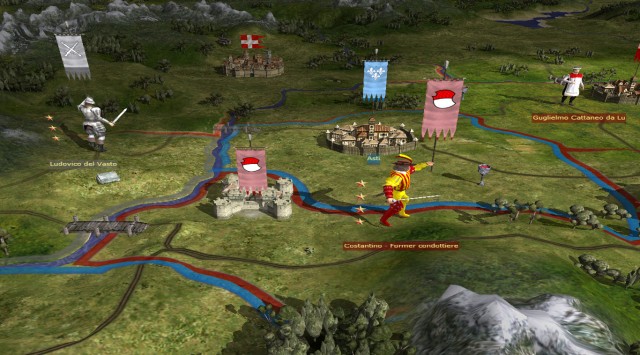 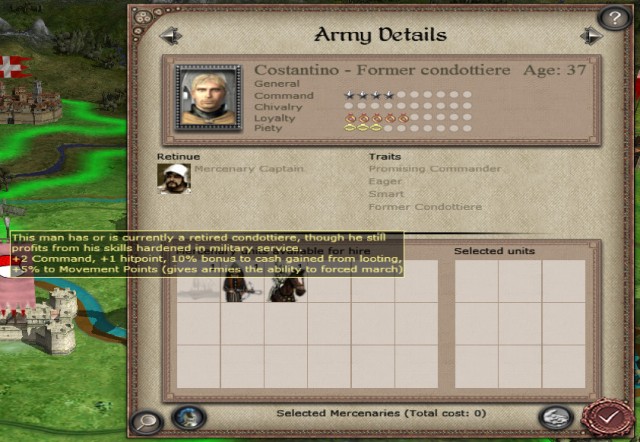 Several new and especially minor factions were added to the version of the Italian Wars - Ultimate. These factions mostly lack huge territories, though they have the chance to gain reputation and land by signing up a condotta with the more powerful factions.

This feature will be available for the following factions:

I hope you enjoyed this preview. This is one of the newly added major features, especially having a large impact on the gameplay of minor factions.