Hello and welcome to developer diary for the next v4 release of Absolutum Dominium Campaigns. Everything that follows is available in Eng only.

Hello! Today we will be talking about the upcoming campaign intro for more minor factions. At this point in development, some of the things you’ll see are still work in progress. 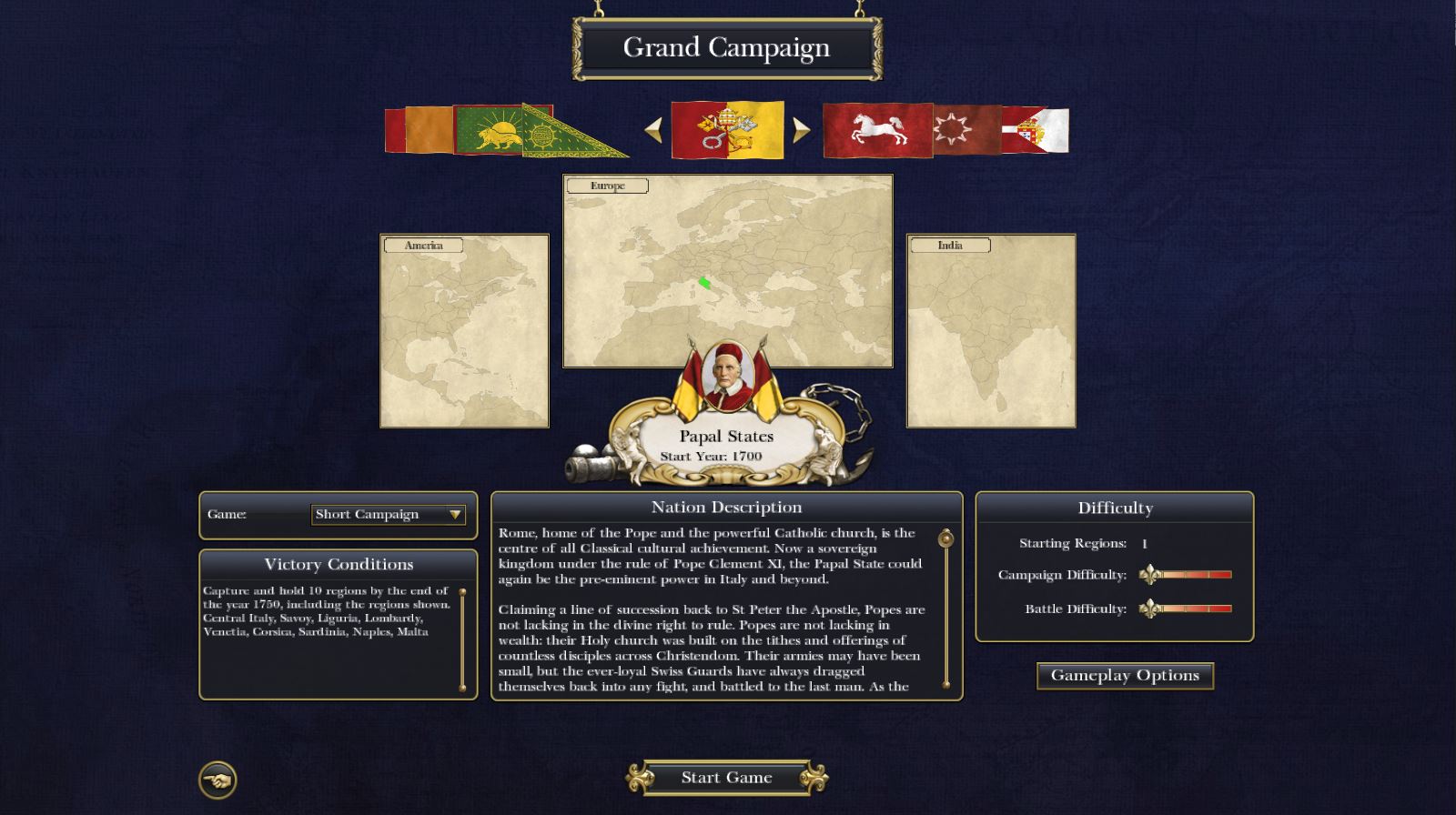 Rome, home of the Pope and the powerful Catholic church, is the centre of all Classical cultural achievement. Now a sovereign kingdom under the rule of Pope Clement XI, the Papal State could again be the pre-eminent power in Italy and beyond.

Claiming a line of succession back to St Peter the Apostle, Popes are not lacking in the divine right to rule. Popes are not lacking in wealth: their Holy church was built on the tithes and offerings of countless disciples across Christendom. Their armies may have been small, but the ever-loyal Swiss Guards have always dragged themselves back into any fight, and battled to the last man. As the new century dawns, the Papacy is surrounded by new threats from all sides. Reformation and religious wars have unshackled many Protestant nations across Europe, allowing them to challenge the Pope’s divine mandate. These Protestant nations, if left unchecked, could spell disaster for the Papacy.

And now, surrounded by rivals and potential enemies, Pope Clement XI faces challenges at every turn. He who rules in Rome can rule the world, but only through the glory of conquest! 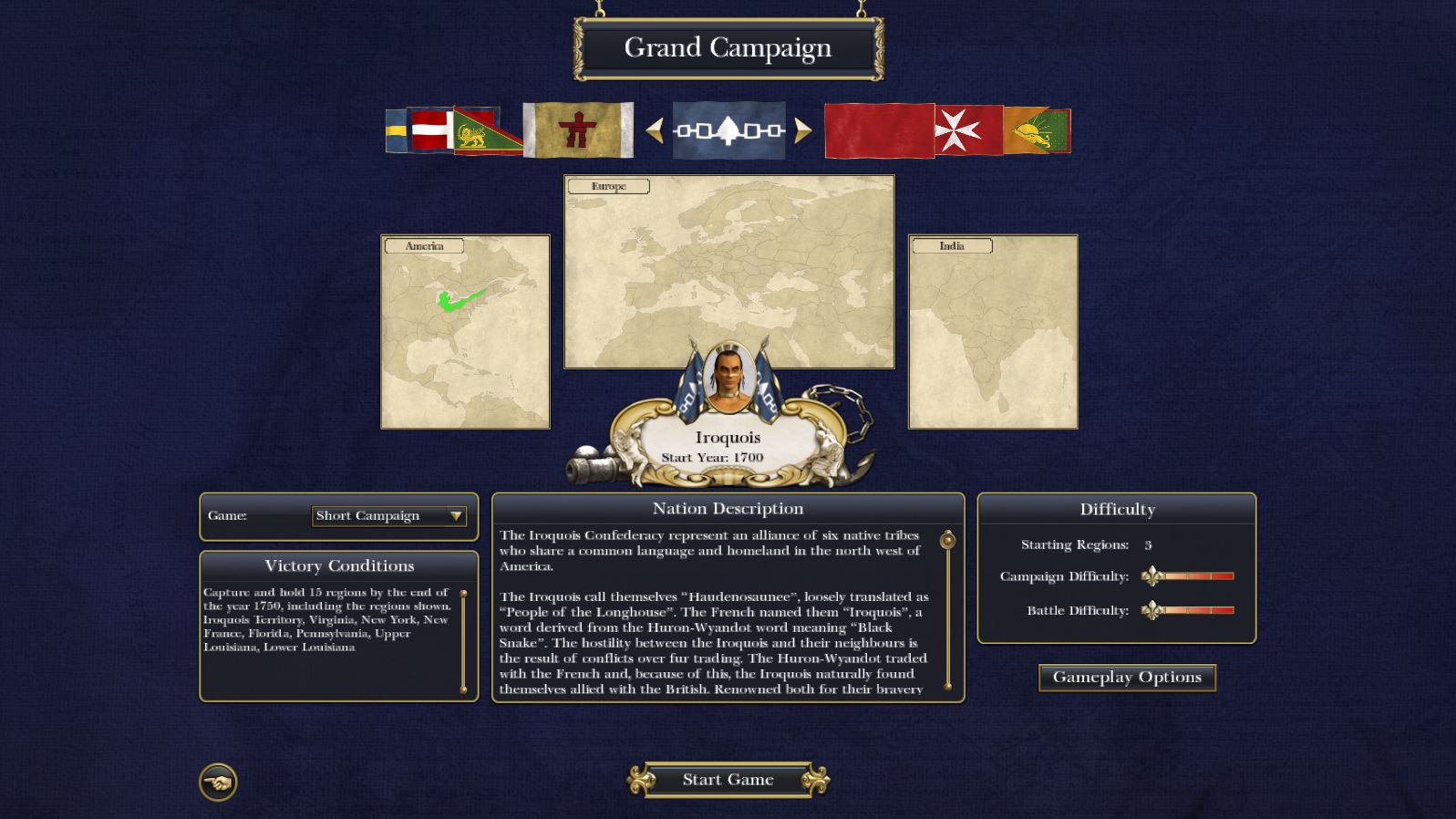 The Iroquois Confederacy represent an alliance of six native tribes who share a common language and homeland in the north west of America.

The Iroquois call themselves “Haudenosaunee”, loosely translated as “People of the Longhouse”. The French named them “Iroquois”, a word derived from the Huron-Wyandot word meaning “Black Snake”. The hostility between the Iroquois and their neighbours is the result of conflicts over fur trading. The Huron-Wyandot traded with the French and, because of this, the Iroquois naturally found themselves allied with the British. Renowned both for their bravery and their skill with the tomahawk, Iroquois warriors guard their homeland jealously in the face of increasingly superior European weapons.

Fortunately the Iroquois are also masters of irregular warfare: appearing from the undergrowth, striking at their targets, and disappearing again as quickly as they arrived. What they lack in terms of technology and firepower, the Iroquois make up for with guile, cunning, and ruthless brutality when on the warpath. 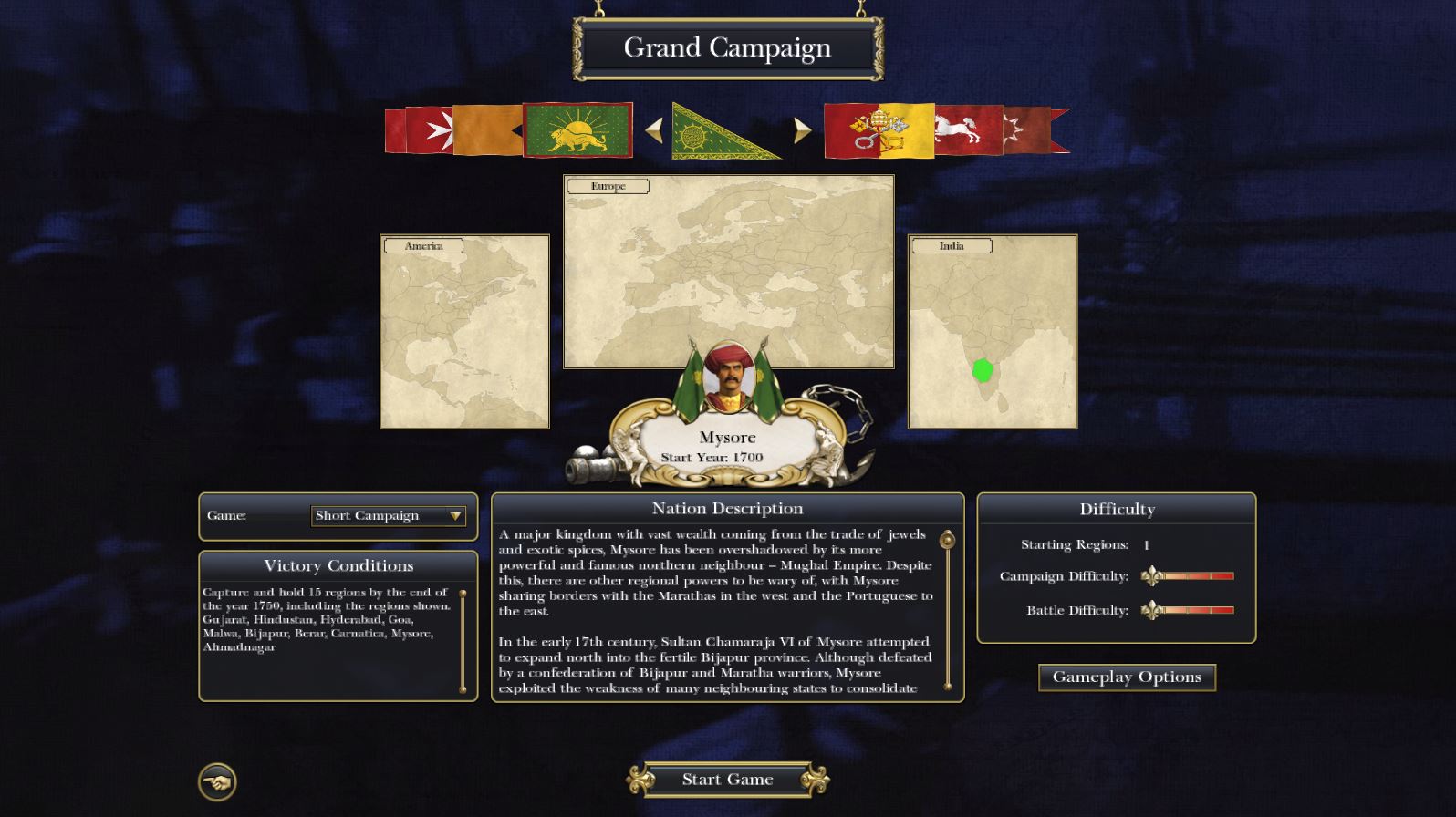 A major kingdom with vast wealth coming from the trade of jewels and exotic spices, Mysore has been overshadowed by its more powerful and famous northern neighbour – Mughal Empire. Despite this, there are other regional powers to be wary of, with Mysore sharing borders with the Marathas in the west and the Portuguese to the east.

In the early 17th century, Sultan Chamaraja VI of Mysore attempted to expand north into the fertile Bijapur province. Although defeated by a confederation of Bijapur and Maratha warriors, Mysore exploited the weakness of many neighbouring states to consolidate its holdings southward. However, the sultans of Mysore still regard themselves as the true Maharajah of India, and have undertaken several campaigns against any rivals. Over the years, Mysore grew to dominate the heartland of Southern India. But despite this expansion, Mysore remained landlocked and without direct access to the wider world through a coastal trading port.

That Mysore is a regional powerhouse is self-evident to many. From his position, the sultan could choose to eliminate the threat from his arch-rival Maratha once and for all. Another possibility would be to strike the Portuguese to gain control over the spice trade with Europe and increase further their economic potential. And despite the good nature of the current relations with the Mughal Empire, the old rivalry is bound to continue, one way or another, until only one of them remains in India… 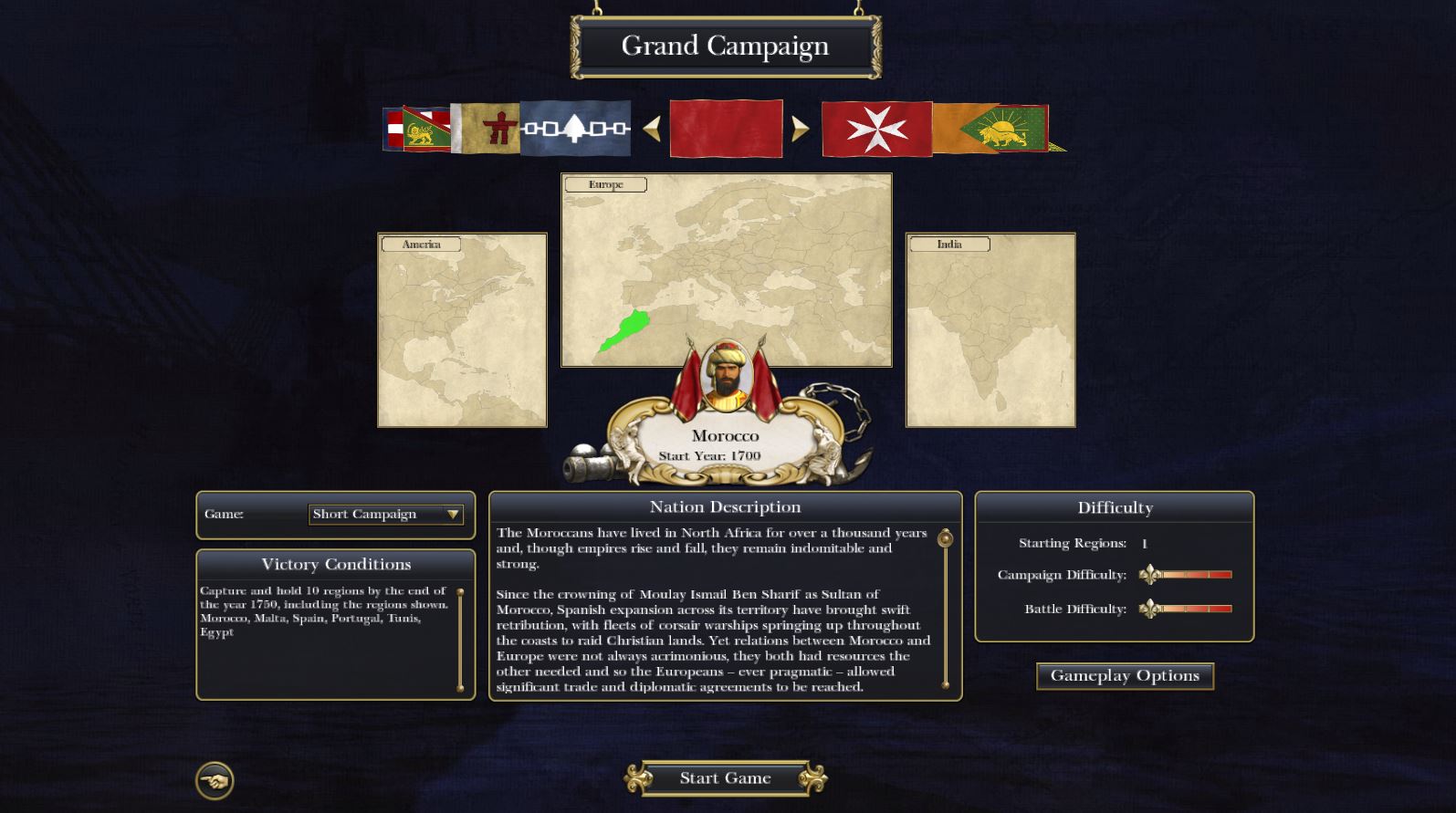 The Moroccans have lived in North Africa for over a thousand years and, though empires rise and fall, they remain indomitable and strong.

Since the crowning of Moulay Ismail Ben Sharif as Sultan of Morocco, Spanish expansion across its territory have brought swift retribution, with fleets of corsair warships springing up throughout the coasts to raid Christian lands. Yet relations between Morocco and Europe were not always acrimonious, they both had resources the other needed and so the Europeans – ever pragmatic – allowed significant trade and diplomatic agreements to be reached.

Now, as the 18th century dawns, Morocco occupy a unique position. From his north African strongholds, Sultan Moulay Ismail can attack the now-troubled Ottoman Empire, forging his own path in the west, or strike out into the Mediterranean to exploit the fragmented Christendom. The world is changing, yet Morocco is poised to seize greatness no matter what! 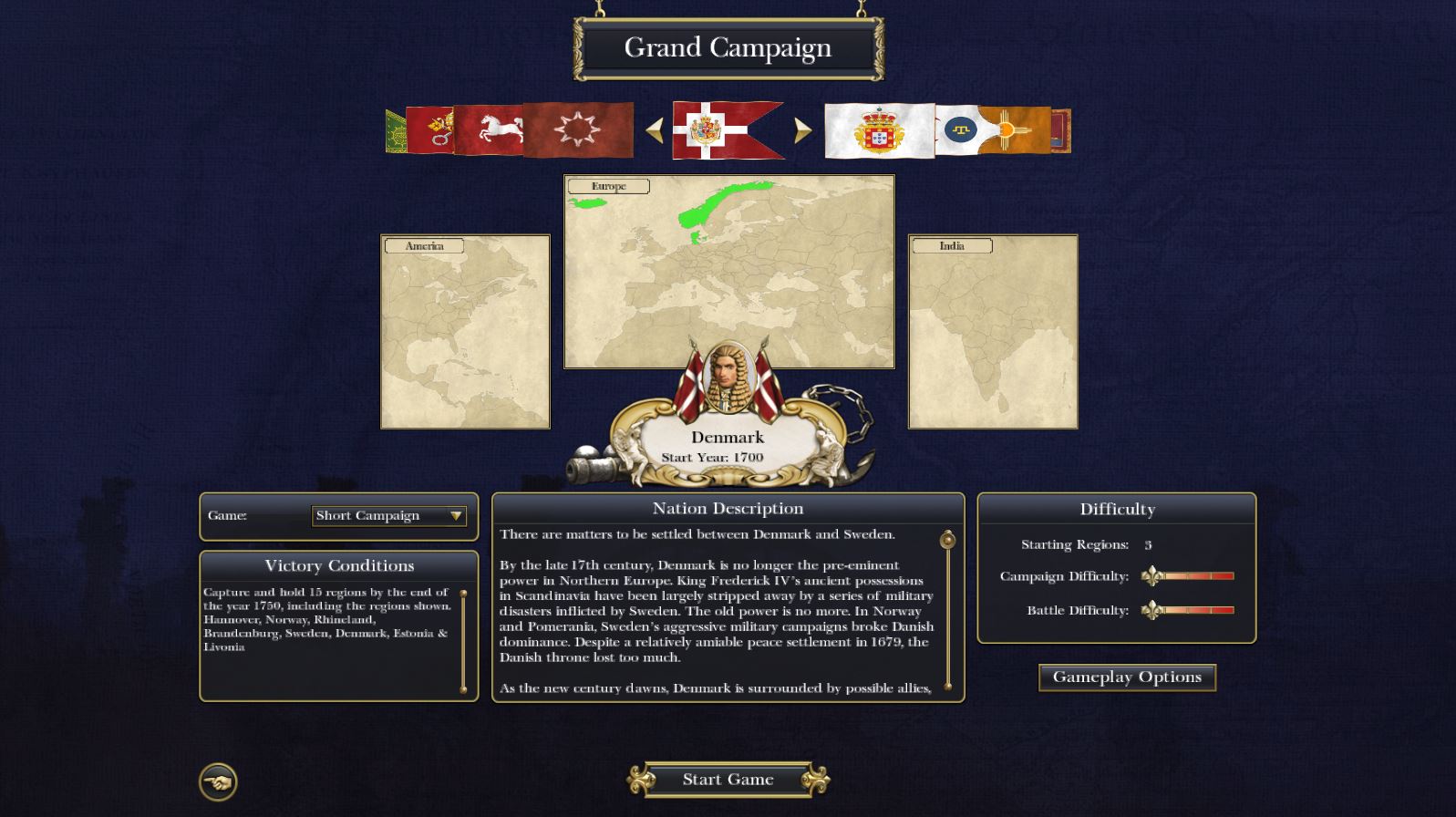 There are matters to be settled between Denmark and Sweden.

By the late 17th century, Denmark is no longer the pre-eminent power in Northern Europe. King Frederick IV’s ancient possessions in Scandinavia have been largely stripped away by a series of military disasters inflicted by Sweden. The old power is no more. In Norway and Pomerania, Sweden’s aggressive military campaigns broke Danish dominance. Despite a relatively amiable peace settlement in 1679, the Danish throne lost too much.

As the new century dawns, Denmark is surrounded by possible allies, to the east, the Russians craved unhindered access to the Baltic, and therefore could be a potential enemy of Sweden. To the south, Poland-Lithuania also wants its lost lands back – and perhaps they could be persuaded to become a valuable partner. The future is filled with boundless opportunities, the army and navy are resilient and brave. Strategically, the Kingdom is in a potentially strong position: the island of Sjælland is a natural bastion to defend Copenhagen, and beyond Europe there are other continents to conquer and colonise: From the vast lands of North America, to the riches of India. Who knows where ambition may lead the Danes? 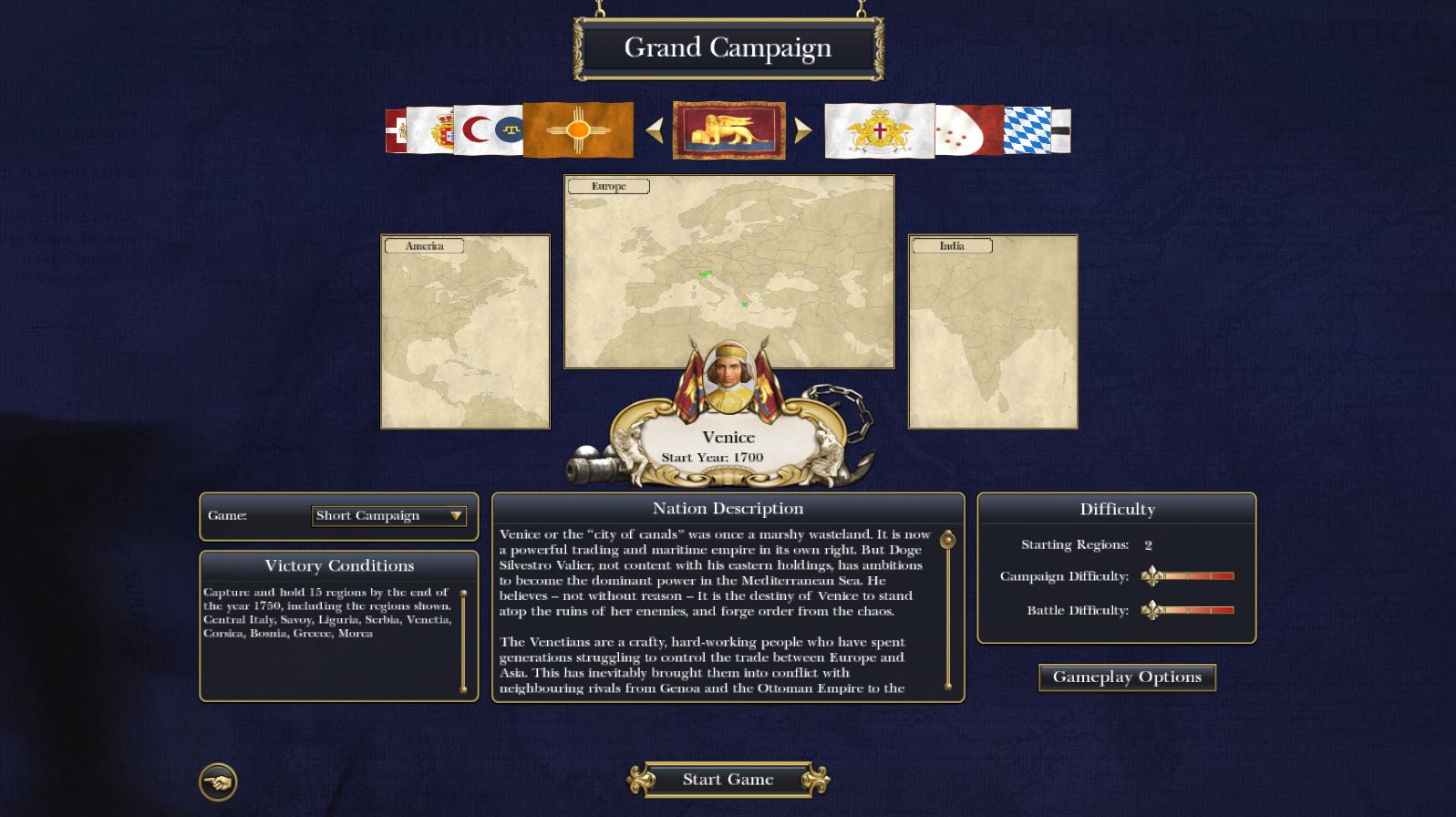 Venice or the “city of canals” was once a marshy wasteland. It is now a powerful trading and maritime empire in its own right. But Doge Silvestro Valier, not content with his eastern holdings, has ambitions to become the dominant power in the Mediterranean Sea. He believes – not without reason – It is the destiny of Venice to stand atop the ruins of her enemies, and forge order from the chaos!

The Venetians are a crafty, hard-working people who have spent generations struggling to control the trade between Europe and Asia. This has inevitably brought them into conflict with neighbouring rivals from Genoa and the Ottoman Empire to the upstart Spain and Austria. The city-state of Venice has always had to fight for survival, and this has made the Venetians competent soldiers and mercenaries. Under the leadership of Doge Silvestro Valier, Venice have made considerable inroads into Dalmatia, and challenged the borders of Istria. Venetian troops have raided as far as Greece, even ransacking Athens in a surprise attack. Doge Silvestro Valier is a dangerous man to watch…

Venice now has a future of boundless possibilities. With a defeated Ottoman Empire falling back to the East, there is no reason why the Mediterranean, as a Venetian “Stato da Màr”, cannot become the springboard for future expansion into Greece and beyond. The Mediterranean swell washes against Venice’s canals, and beckons its seamen onwards: trade and adventure lie that way too. With the Ottomans struggling against Habsburg Austria, the Venetians could exploit this and establish their own empire stretching from the coast of Europe to, perhaps, the far shores of the Persian Gulf. 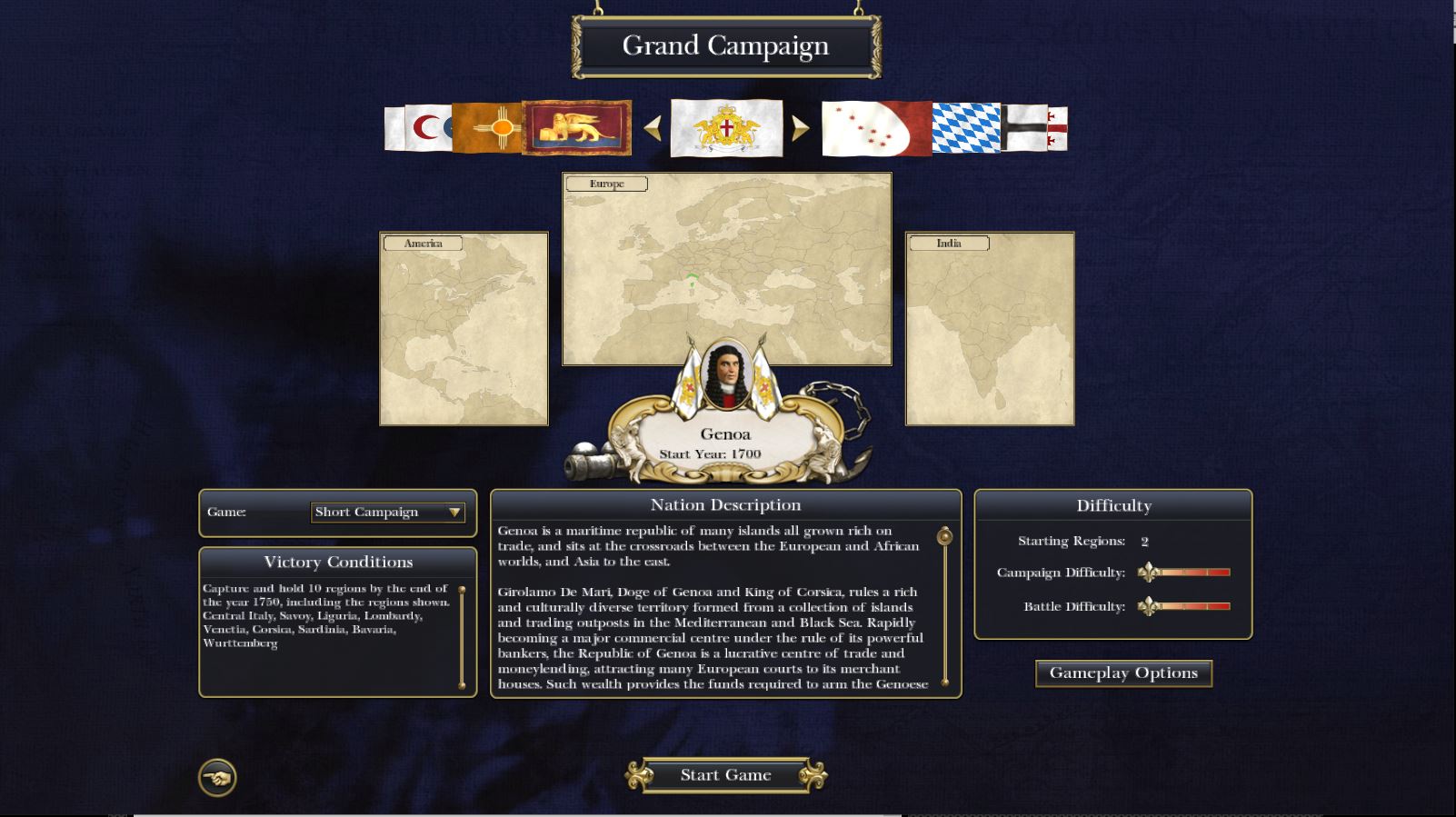 Genoa is a maritime republic of many islands all grown rich on trade, and sits at the crossroads between the European and African worlds, and Asia to the east.

Girolamo De Mari, Doge of Genoa and King of Corsica, rules a rich and culturally diverse territory formed from a collection of islands and trading outposts in the Mediterranean and Black Sea. Rapidly becoming a major commercial centre under the rule of its powerful bankers, the Republic of Genoa is a lucrative centre of trade and moneylending, attracting many European courts to its merchant houses. Such wealth provides the funds required to arm the Genoese navy with better warships. Despite an, at times, precarious position at home, the Genoese now look to expand across Italy and beyond.

The Genoese are brave and intrepid, even though the Republic is surrounded by powerful rivals. There are opportunities and dangers aplenty. To the north, France is the dominant power – and King Louis XIV’s ambition in Europe comes at a great cost to the lives of his Dutch, Italian and German neighbours. A Genoese leader who picked his alliances carefully could do much to revive Genoa’s fortune. The French have no divine right to dominate Italy, or the upstart Savoy to control the Alps. And then there is Venice: always there is Venice. That rapacious little city-state will have to be dealt with at some time.

Finally, we also spent some time making sure all Indian faction has the full lineup of unique campaign characters.

That’s all for today ~

I am waiting impatiently my friend :)