A mini-mod that adds more historically accurate models to the campaign maps. Special thanks to the team at Imperial Splendor for assistance. This mod is not compatible with any other mods that modifies: - campaign startpos.esf file

For the next upcoming update, there will be more campaign faction introductions. Here are just a few snippets: 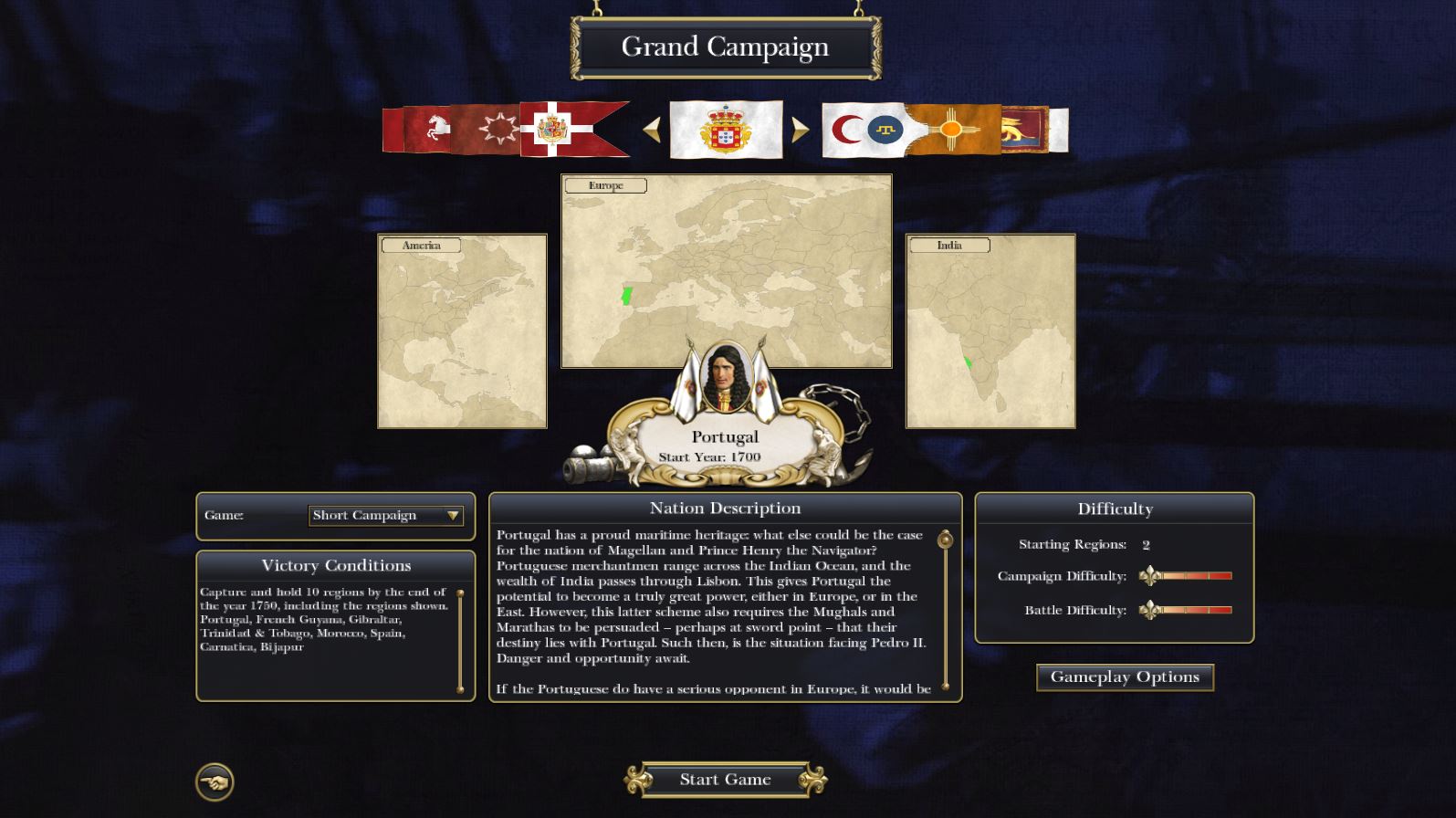 Portugal has a proud maritime heritage: what else could be the case for the nation of Magellan and Prince Henry the Navigator? Portuguese merchantmen range across the Indian Ocean, and the wealth of India passes through Lisbon. This gives Portugal the potential to become a truly great power, either in Europe, or in the East. However, this latter scheme also requires the Mughals and Marathas to be persuaded – perhaps at sword point – that their destiny lies with Portugal. Such then, is the situation facing Pedro II. Danger and opportunity await.

If the Portuguese do have a serious opponent in Europe, it would be Spain: thanks to colonial rivalry and a genuine wariness of Spanish ambitions to unify the Iberian Peninsula. It may only be a matter of time before Spain once again looks to expand its border through war. Other threats include King Louis XIV, who desires to make France the dominant power in Europe. Even the distant Moroccans have to be considered, should they ever launch a new assault from across the Strait of Gibraltar. There are allies available, if the Portuguese can stomach them. The British are condescending and unwilling to fight on land, but they have the wealth needed to finance a war. The Dutch may also be willing to help, even as they will do their best to hamper Portuguese ambitions overseas.

For the future, Portugal have much to be hopeful about. They have a strong navy, and a tradition of victory. There is wealth aplenty in every corner of the world, if only the Portuguese have the will to go and take it! 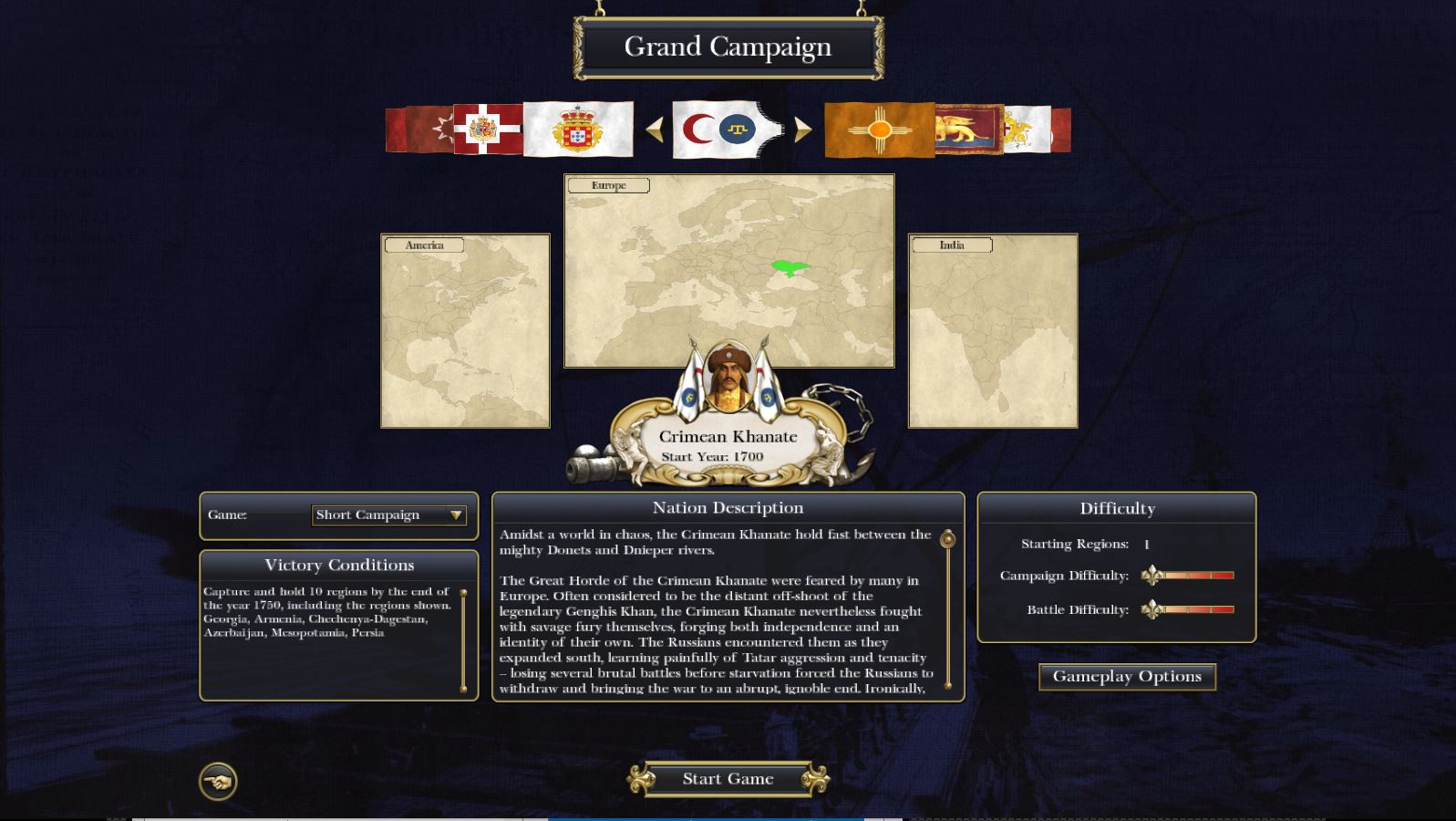 Amidst a world in chaos, the Crimean Khanate hold fast between the mighty Donets and Dnieper rivers.

The Great Horde of the Crimean Khanate were feared by many in Europe. Often considered to be the distant off-shoot of the legendary Genghis Khan, the Crimean Khanate nevertheless fought with savage fury themselves, forging both independence and an identity of their own. The Russians encountered them as they expanded south, learning painfully of Tatar aggression and tenacity – losing several brutal battles before starvation forced the Russians to withdraw and bringing the war to an abrupt, ignoble end. Ironically, the Crimean Khanate was backed by both Poland and the Ottoman Turks, who forced the Russians to continue their northward flight before they were able to establish complete dominance in Crimea.

The dawning of the 18th century promises nothing but further chaos across Europe; the Ottoman Turks continue to maraud whilst the quarrelsome kings of Christendom bickers amongst themselves. Amidst this, the Great Horde of the Crimean Khanate stand firm, determined to prove themselves strong, to emerge as the true and worthy successor of Genghis Khan! 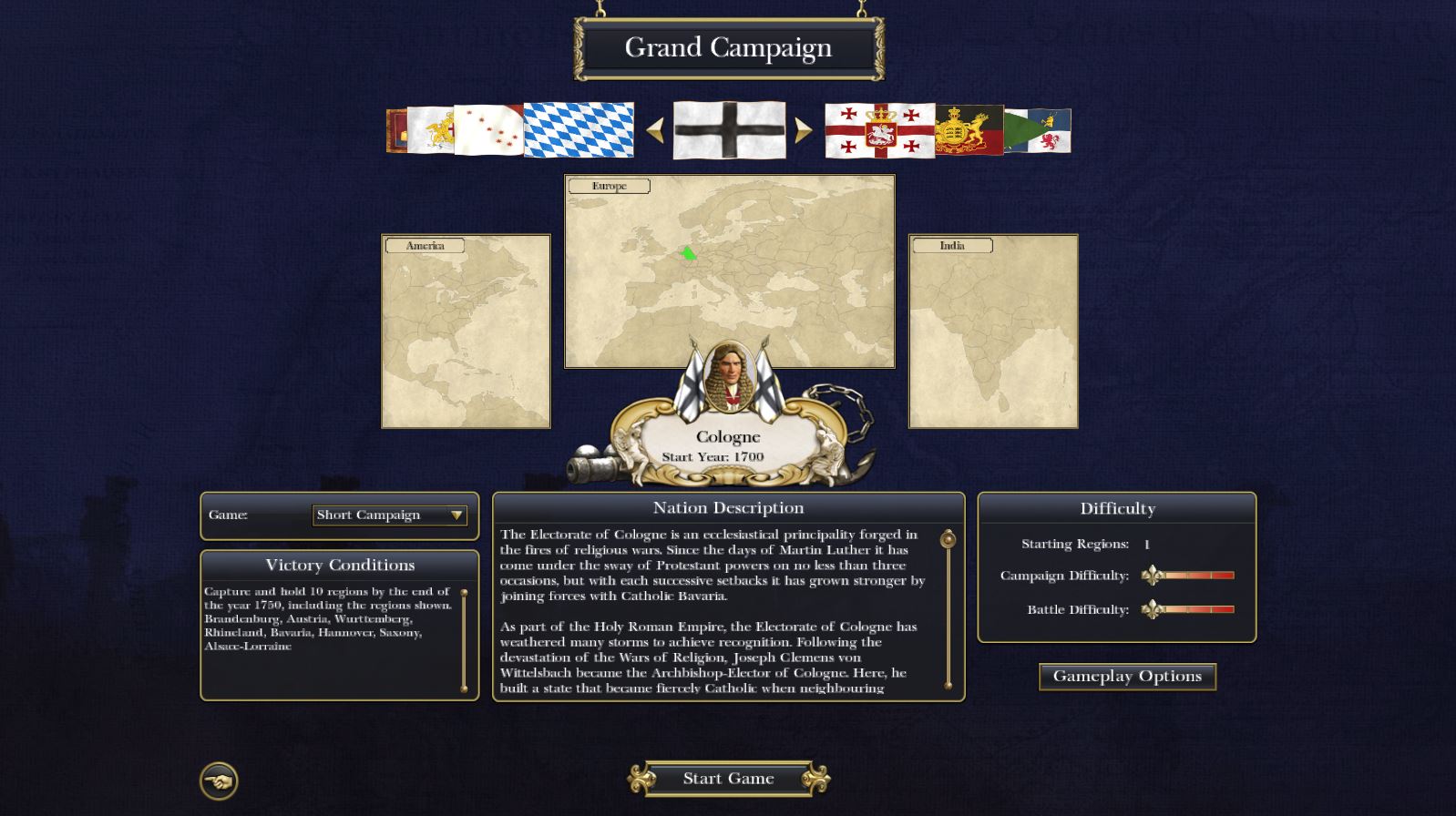 The Electorate of Cologne is an ecclesiastical principality forged in the fires of religious wars. Since the days of Martin Luther it has come under the sway of Protestant powers on no less than three occasions, but with each successive setbacks it has grown stronger by joining forces with Catholic Bavaria.

As part of the Holy Roman Empire, the Electorate of Cologne has weathered many storms to achieve recognition. Following the devastation of the Wars of Religion, Joseph Clemens von Wittelsbach became the Archbishop-Elector of Cologne. Here, he built a state that became fiercely Catholic when neighbouring German states remained Protestant. However, the Elector’s relationship with his Habsburg overlord was not always friendly, as he was allied to France for a time and has meddled in the affairs of the Holy Roman Empire at French behest.

Now, though nominally under the rule of the Habsburg Holy Roman Empire, the Elector of Cologne has managed to retain some autonomy, yet he is nevertheless expected to provide military support to the Habsburg emperors when required. However, the “Most Reverend” Archbishop-Elector do not intend to yield, or to bend the knee to anyone but God Almighty! 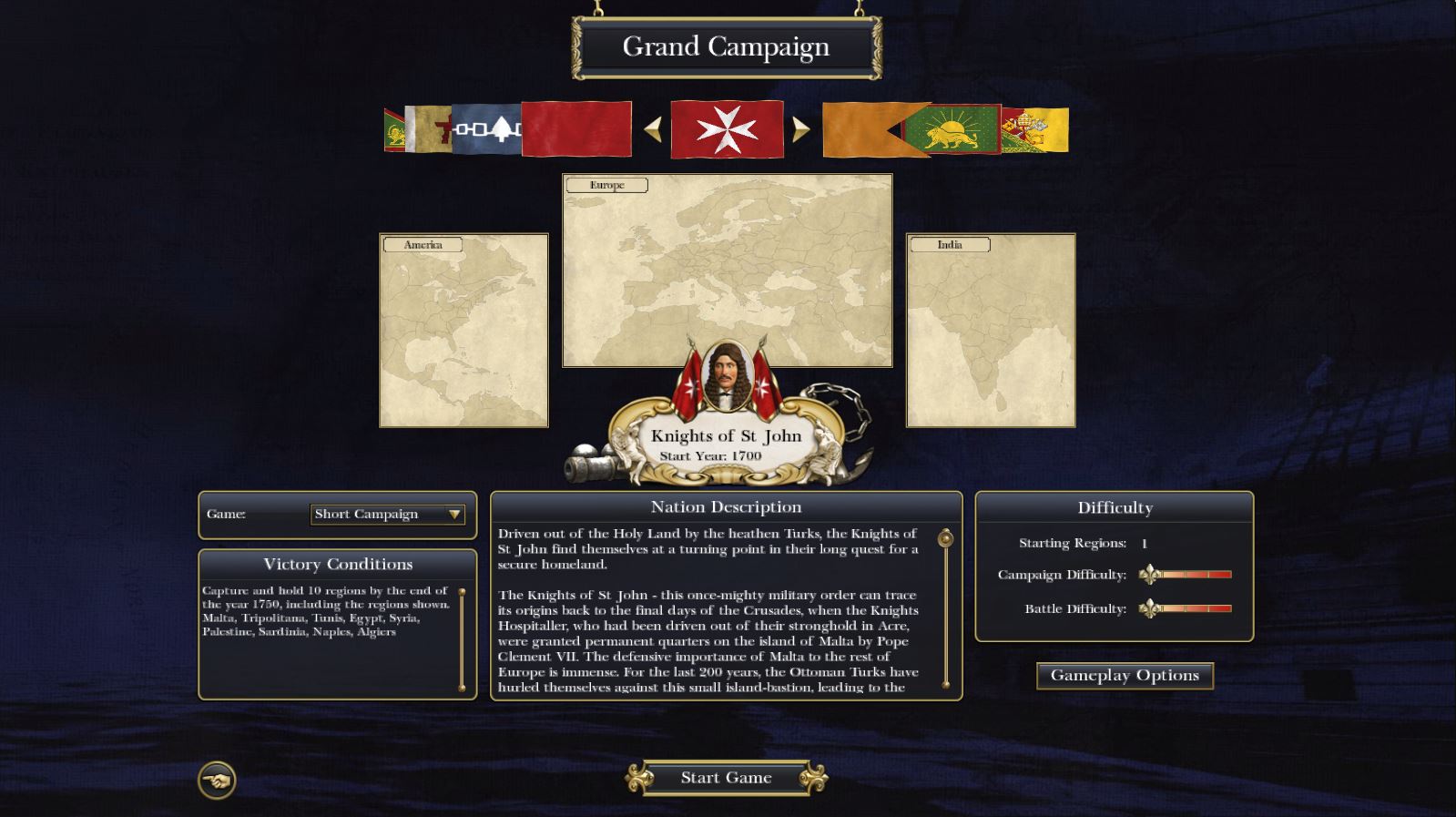 Driven out of the Holy Land by the heathen Turks, the Knights of St John find themselves at a turning point in their long quest for a secure homeland.

The Knights of St John - this once-mighty military order can trace its origins back to the final days of the Crusades, when the Knights Hospitaller, who had been driven out of their stronghold in Acre, were granted permanent quarters on the island of Malta by Pope Clement VII. The defensive importance of Malta to the rest of Europe is immense. For the last 200 years, the Ottoman Turks have hurled themselves against this small island-bastion, leading to the Great Siege of Malta in 1565. The Knights’ bravery has kept the Ottoman Sultan at bay, every time.

Now, however, with the dawn of a new century, everything has changed - the Ottoman Turks have been defeated both in the Mediterranean Sea and at the gate of Vienna. In all these triumphs lurks opportunities for those bold enough to seize the chance. There is no reason why the Mediterranean cannot become the Knights’ “Mare Nostrum”. 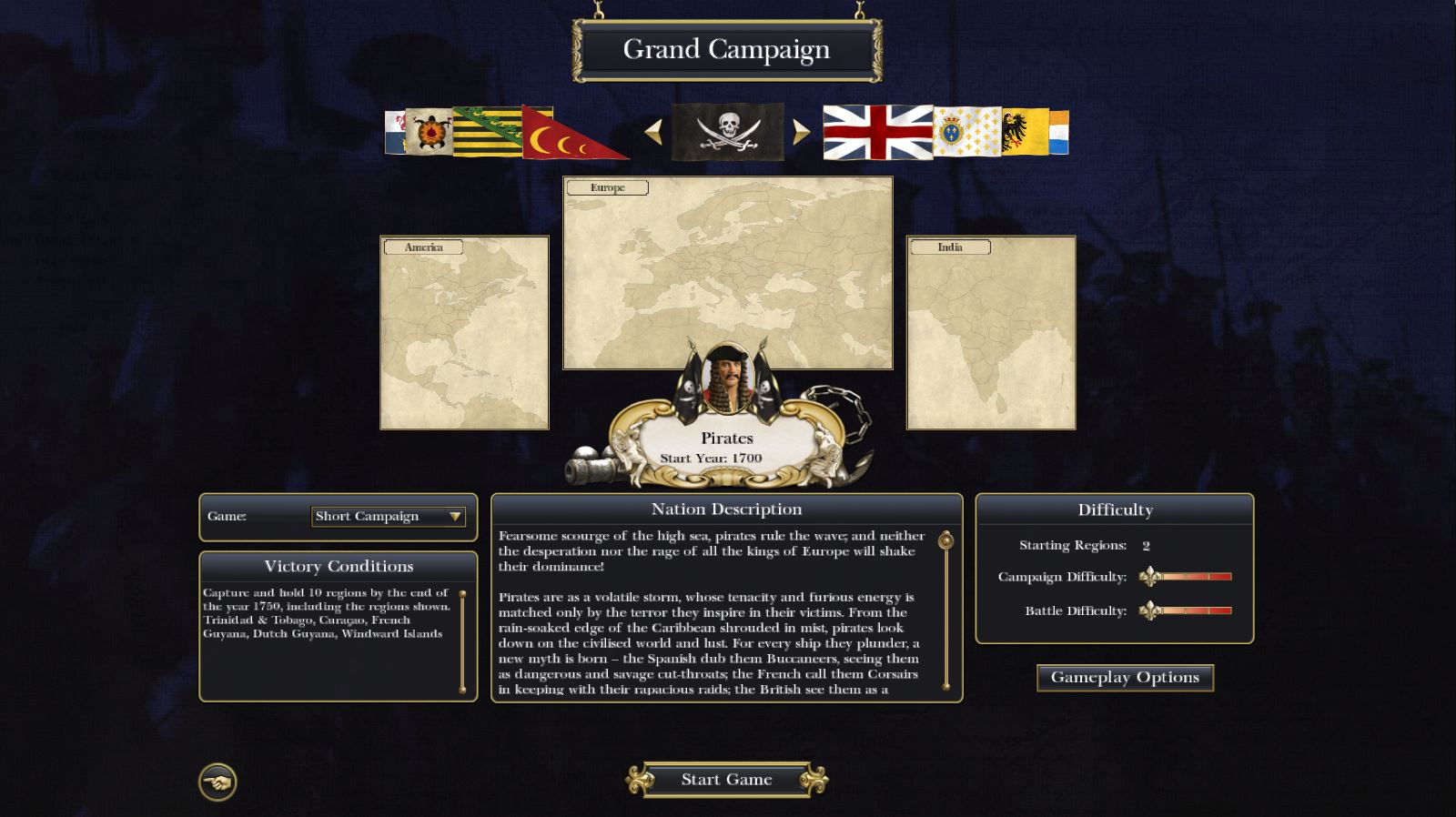 Fearsome scourge of the high sea, pirates rule the wave; and neither the desperation nor the rage of all the kings of Europe will shake their dominance!

Pirates are as a volatile storm, whose tenacity and furious energy is matched only by the terror they inspire in their victims. From the rain-soaked edge of the Caribbean shrouded in mist, pirates look down on the civilised world and lust. For every ship they plunder, a new myth is born – the Spanish dub them Buccaneers, seeing them as dangerous and savage cut-throats; the French call them Corsairs in keeping with their rapacious raids; the British see them as a provocative threat lurking in the vast horizon beyond their coasts.

None of these myths are by themselves sufficient to describe the might and power of the pirates. In reality, they are a loose confederacy of adventurers, ex-privateers and fugitive slaves, invigorated by a confluence of cultures whose sum is far greater than its parts. As yet, their warships has proved unstoppable. Empires across Europe have felt their wrath and now their ravenous eyes have settled on the rich trading ports of the Caribbean. Like the ocean mist they will descend and smother the excesses of the European empires! 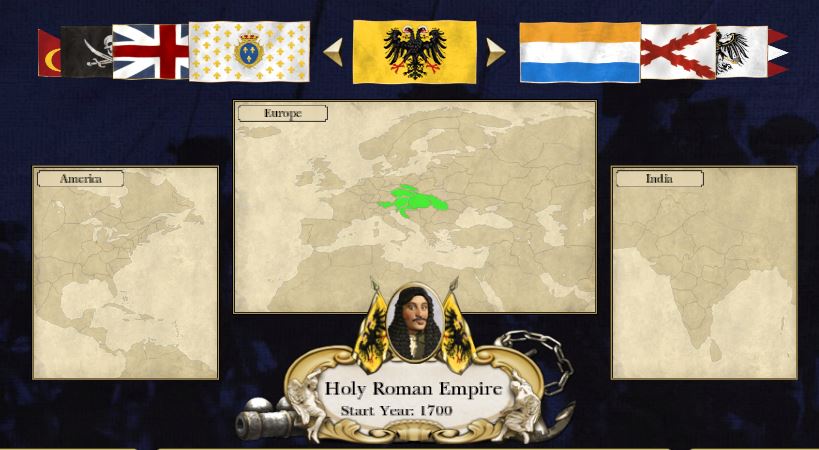 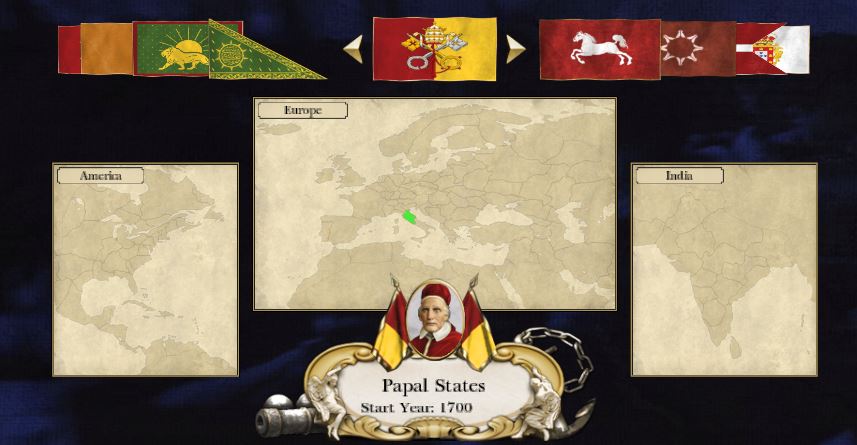 And there are more to come, stay tuned~

Harness the destructive power of the Seven Years War in the first DLC Campaign for ABSOLUTUM DOMINIUM. Enjoy a brand new faction; over 150 new historical...

All empires are born in the tempest of war. It is how they weather the storm that defines them.

Hello and welcome to developer diary for the next v4 release of Absolutum Dominium Campaigns. Everything that follows is available in Eng only.

Harness the destructive power of the Seven Years War in the first DLC Campaign for ABSOLUTUM DOMINIUM. Enjoy a brand new faction; over 150 new historical...

As Absolutum Dominium campaigns has many overlapping mods I decided to release a combined campaign mod for v4 - the AD Campaign Pack, with new UI, over...

Disclaimer: the music in this mod are composed by Michael Curran and Geoff Knorr for Civilisation 5 of Firaxis Games by publisher 2K Games. I do not own...

You must BACKUP all your startpos files before installation: To install: 1) Unzip file, place mod_CModel.pack in C:\Games\steam\steamapps\common\Empire...

You must BACKUP all your startpos files before installation: To install: 1) Unzip file, place mod_CModel.pack in C:\Games\steam\steamapps\common\Empire...

Nice work, can be please as addon for Darth Mod?

I don't know if I installed it wrong because everything works but the modified faction flags don't appear. I'm still playing with the vanilla ones even when all other modifications (Portraits, campaign models, unit models) work.

Needless to say, this mod is a masterpiece and I'm really enjoying it.

Thanks, but to get faction flag you need to install it separately, at Moddb.com

Can I use the mod for the campaign models with Empire Total Factions?

It probably will clash, that's why I also made all factions playable here (except emergent factions)

Hello friend, where do you edit the aggression and expansionism of a campaign faction?

For more info you can have a look at how Pikestance weakened Maratha in his Orange Crush mod at Twcenter.net

hi my friend.
I was going to ask you a question. Ottoman dlc units are not visible in db editor. sample Coire Janissary?

That unit is in Patch4, so when you launch db editor, you need to tick the box for Patch4 in order to access Cairo Janissary