Version 2.0 of California Megamod has been published in the official website (mods-gta.blogspot.com) in january 4th 2015.

Version 2.0 of California Megamod has been published in the official website (mods-gta.blogspot.com)
it features a lot of features listed in previous posts and some new features never mentioned before. 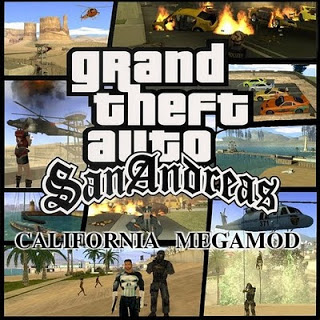 i also have already published:

- An English patch to translate some text into english that was only available in spanish in the main release, for example the cheats menu and descriptions of each mod and special keys in mod launcher They now will appear in english if you install the english patch into your megamod folder (small file).

- A patch to fix some bugs and improve some things. (i did 1 patch and later made a new one which includes the first one, so you only need to install the second one, and this is the reason there is only one patch available now for downloading)

Both patches are available here at moddb in the download section. The megamod is not yet available in moddb but it will be later, for now go to my website and download it there.
Mods-gta.blogspot.com
i will be releasing new patchs and updates soon.

i hope you all enjoy California Megamod as much i have enjoyed working on it.
This project is my tribute to the GTA MODDERS COMUNITY.
Thank you very much for your outstanding work. You are the best.
without all of you this project would have never existed.

mediafire is no good for a lot of peeps.

i think i downloaded the old v1.5 mod from megaupload :)
ahhh,those were the days :)