The next version of Brothers Realism Mod is almost ready with just the documentation to complete. Read the full article to read what is included in version 2.0.7! 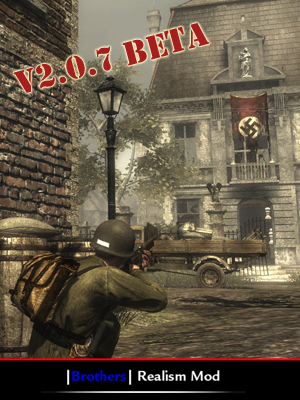 - New NCO helmet for US team
- Russian and US soldiers without helmets now have them (with no extra assets!)
- improved the 'one primary weapon' code to keep the weapon you'd picked up
- improved the squad loadout menus. They now refresh themselves back to your current selection
- Bayonet attachment added to Type 99 lmg
- Dropping of frag grenades on death (gametype dvarable)
- Score saved on the map and restored if player reconnects after being disconnected
- Rewritten logging functions to produce cleaner weapon stats for XLRstats
- Added B3 Poweradmin features
- Improved binoculars - now visible when not aiming
- Clan mode options added to admin menu
- Admin free spectate (usable through admin menu or via B3)
- Dvar to disable mortars on per map basis
- Destructable mortars
- Improved bipod code
- Mortar improvements. Officers must be near the mortar crewman and will specify a target.
- Addition of Greasegun to Classic mode
- Improved player waypoints
- Ability to view players in classes
- Ability to drop bomb once picked up in S&D
- Options to change map and gametype in admin menu
- Bullet suppression effects
- Created BRM plugin for B3

Does this mean that the bipod can be deployable on the ground and any static position (walls, windows, sandbags, etc.)

The improved bipod code stops players planting the bipod while prone and glitching through walls or the floor.

Currently I am still using the in game functionality for deploying bipods on window sills and ledges.