More updates can be done, instead of this long radio silence, but help is needed from the community, read this article to know how to do it, and what you get in return. Or you can read it only to see the latest development news (on the end of the article)

Hello, as some of you might noticed, it is a loooooong time that I don't write anything here.

Why is that? It is because I am unhappy with you. Yes, what you just read.

The game is fun, and I am still working on it, in fact the game is VERY fun, now I find all other games in the genre boring, I even get myself playing Arkanoid on SNES, and trying to press buttons to see if they do some cool stuff, but no... I need to wait for a powerup to drop randomly... boring...

So, I am still working on the game, because I want to play it myself, I plan even to make some arcade cabinet later (and yes, if you can afford the materials, have patience and can pay for the shipping costs, I may make some to interested buyers), a cabinet that will look cool and shiny in my living room, or bedroom (my bedroom is bigger than the living room currently...).

But I am not posting here, I am making a reduced amount of posts in my own blog, also no updates on TIG forums, gamedev.net forum, twitter... The reason for that, is that I have the impression that noone is reading to a stretched effort along several places, so that I would be better making the game silently instead.

But I decided to write this post to give you people a chance! A mighty and cool chance! What it is? It is simple, I want you people to spread the word, and vote with your clicks, the communities that get popular, I will update frequently (the more popular, the more frequent I will update). This is valid even for my own blog.

So, do you want updates here? Just follow us here... If I get happy with followers here, I will start to at least mirror posts of the blog, or even start to write weekly posts here (like Notch do with Minecraft).

And finally, I already write a lot there, so I ask everyone to add blog.agfgames.com do your favourites or visit the site and add the feedburner feed to your whatever reader.

Since I am writing here already, some news about the game itself:

First, I lowered the resolution to 800x600, mostly by reducing the humongous GUI (that now look really cool as the pic shows) 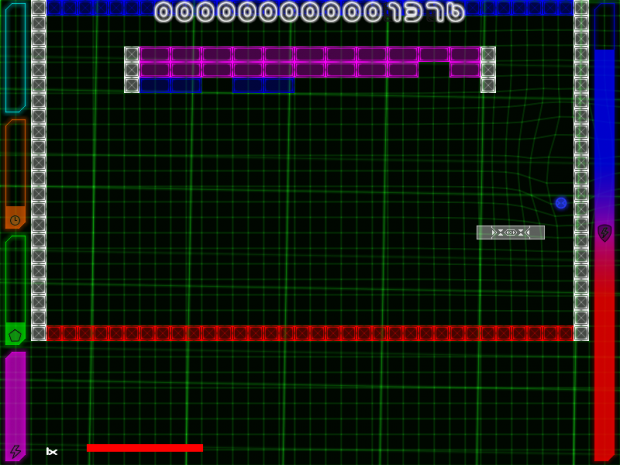 The reasons for that was to first, make the playfield smaller (it is less tall now, thus reducing the ball travel time, thus making the game much more exciting), second, to allow the mentioned construction of a arcade cabinet (good arcade monitors rarely support resolutions higher than 800x600), the third, is to make the game faster (specially after the introduction of some CPU consuming visual FX), and finally, to make the GUI smaller and more cooler.

Also, I made a MASSIVE cut in level amount, as some people remember, the first version had 25 levels, and 5 of them sucked, so I cut them out. Then we had 20, but of those, several still sucked, or were rehashes of previous ones, I cut them too. Now we have 9 levels.

But it was worth it, because now all levels are cool and exciting, and you see the cool stuff of the game much faster (you needed before to play for like 10 minutes to see what makes the game unique and cool, now you see it much faster). Also allow for score runs easier, since you can finish the game faster, thus finishing several times is not a problem anymore.

But not only that, I decided to now use all the framework that I had prepared for the second level set, because the first level set was "too same" the things, the results is levels not shaped like rectangles, new bricks, and some interesting stuff. 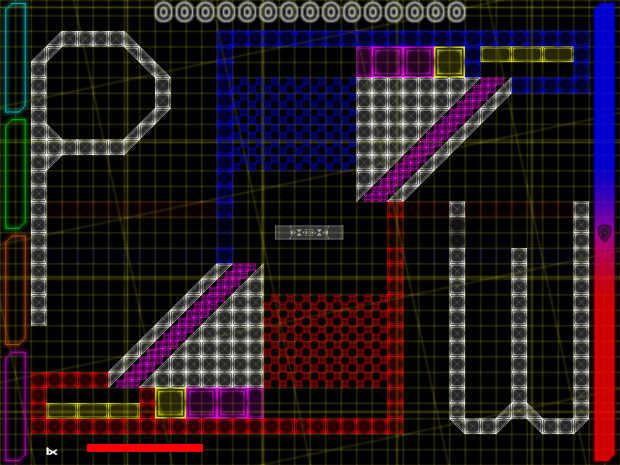 Also, several minor complaints are being fixed, specially to make things more obvious, like what each pickup do, how to fill the bars in the HUD, more special FX (specially particles... LOTS of particles!) some graphics got changed (the most notable one is the small cubes that fall from blocks, they are now always yellow, to indicate that you have to GRAB, and not avoid them like some players were doing, and they are not just stupid squares that rotate...), and several of the underling code and graphics got fixes, improvements, organization, refactoring, etc... So I can work faster from now on, and so later the game can be easier to mod (yes, I will allow modding of the game! Yay!)

So, this is it, vote on where you want updates with your click, and soon enough I will announce new versions to test, and I will also make some promo (yes, promo! probably a weekly competition with some steam games as prizes, or something else, I need to elaborate more here).