Today we have two brand-new weapons for US troops serving in Europe. 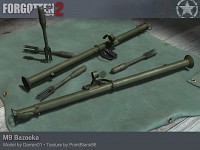 The M9 Bazooka was a 60mm anti-tank weapon used by US troops in the later stages of WWII. Starting in 1944, it began to supplement the older, M1 and M1A1 models. The new variant featured metal furniture, a reinforced launch tube, and even had an optical sight for improved accuracy. While the M1 could only penetrate up to 80mm of armor, the M9 fired the improved M6A3 rocket, and could penetrate up to 126mm of armor, but with the introduction of heavier tanks and improved armor, the weapon's effectiveness was limited to destroying bunkers and fixed fortifications. The M9 Bazooka was modeled by Darren01 and textured by PointBlank86.

Up next is a render of a rifle that saw action throughout World War II despite being replaced in 1937; the M1903A1 Springfield rifle. 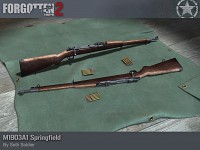 The M1903 Springfield rifle was a bolt-action, clip-fed rifle, used during both World War I and World War II, that represented the Army's first attempt at a standardized weapon. Although it was already being replaced in 1937 by the semi-automatic M1 Garand, the A1 version of the rifle was still used by various front-line units. Army Rangers and Marine Scouts preferred the rifle for reconnaissance and commando missions, and grenadier troops used the M1903A1 as a platform for rifle grenades. The M1903A1 Springfield was made by Seth Soldier.

Looking forward to the next Release!

Unfortunately my BF2 is a bitch now and then, so I can´t play FH2 atm!
Any chance you switch to another engine and release this as an Indie Game?

Really hoping to get into this as soon as I iron out some BF2 related problems.