News about Time Trials, the light mechanic, and some general news!

Weeks ago when the SDK and Reepblue's hand broke (both were fixed), we have been looking at a lot of things about Blue Portals we thought we should change. Before the tools and the hand became shattered, most of the concern was on Test Chamber 07. If you don't recall, Chamber 07 is where the player is able to Portal light for the first time ever in Portal or a Portal mod. So yeah, we got it to work and we managed to do a few puzzles with it. That's one of the things I'm gonna talk about in this article.

Portaling light was pretty much magic-talk before we got it to work. Hundreds of people would burn at the stake for even saying such words (it's a joke, don't go putting on a fire-proof suit now). But now, we got it to work, did a few rooms and the system didn't break. We went over this last time, so what's so new today? Well, lets say that not only you can Portal light, you can reflect it, too! Heres an in-game demonstration:


This is a early room, early mechanic build, and therefore, subject to change. But the point is clear. You can move light and bend it so it points at a light panel to open a door. Remove the light source and the door closes. That's where most of the time and energy has been going.

Another thing we have been looking at is the Time Trials game-mode. Mostly, we have been working on the Time Trial versions of the Test Chambers, and since all we have is Time Trials Chamber 05 at the moment (we can't decide whether to keep the demo map or not), we've been looking at how we can make it more fun. The problem is that after you play it so often, it gets pretty stale. We had ideas of random time decreases, penalties, and random button placements. They either stressed the system too much or made the game mode more annoying then fun.

So what we have right now is to keep the Time Trial system the way it is for the Chambers, but also make a few exclusive Time Trial maps. So what can we do on exclusive maps that we can't do in chambers? Well, for the exclusive maps, we are aiming for it to be outside the Test Chambers, which means we can make more paths and rooms that randomly close and open on each map load (thanks, Valve!). We're also planning on just having one or two Clock Cube and add way-points to them and make them appear in random locations. And to finish it, instead of racing to an exit like you would in a Chamber Time Trial, you have to place the cube/s on the button/s that Colossal skinned before the clock reaches "00." We are still playing around with it, so expect a change or two. We'll first apply these new changes to the beta/demo map Reep released on myApertureLabs back in February (which again, we're debating about releasing or not).

And next, we have shipped some early builds to some beta testers. And a problem was the 'announcer' (Ok, in the game, she's called the 0ver5e3r, but we've been calling her the announcer during development). The 'announcer' plays the role similar to GLaDOS in Portal, although she was not planned until after we decided it would be cool if a voice informed you on your time in Time Trials. Then we thought it would be even cooler if there was a connection. So the 'announcer' was born. The problem with her is that she's made of basic Text-To-Speech sayings. She's either hard to understand, and/or too quiet for some play testers. So whats our solution? We first off, make her louder for those who say shes too quiet while not making it an ear-ache for those who hear her fine. And second is to make her more understandable. . . Somehow. We will write an entire article about her when or if we are happy with her.

Lastly; over the past few months, I have been working on something where people can get information about the game's story and testing elements without posting in the comments and having their karma points taken away. And that is; The Blue Portals Wikia page. It's still small at the moment, but as development continues on the mod it will be updated more and more. Also at the moment, it's not entirely user-friendly, so post recommendations in the comments and maybe even email or message me about how it can be improved! 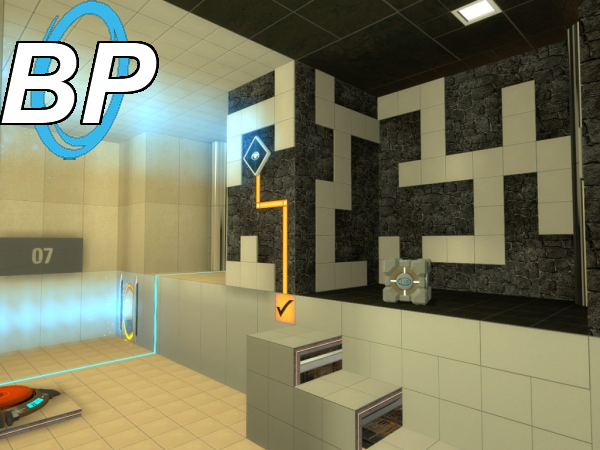 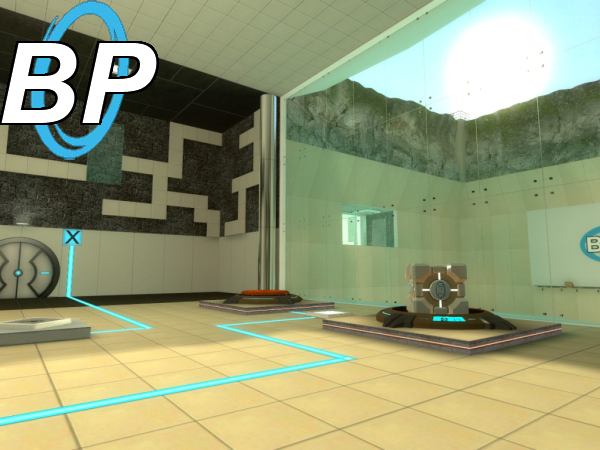 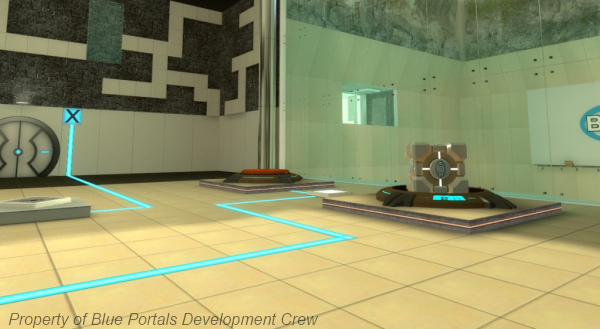 This is what I call a Puzzle game, not those ****** puzzles like:
Find the cube and put on the button (the cube is behind a table).
At last I'm seeing that these are interesting puzzles and a nice mod, wish you luck :)

Sweet this looks like a realy hard challenge :O!

^ By that I meant the whole game

Being able to manipulate light with reflector's and portals is pretty cool, but I have to say I hope you'll really figure out some better uses for it. True, like you said, that was an early mechanical build, but except for visuals, there's really not much difference between portaling light or the little energy ball thing in Portal. In fact, the difference would be that the energy ball is more difficult because you also have to factor in velocity.

True, however one difference that the light has over the energy ball is that it can temporarily be placed. Like in the video, if the light was cast over the catcher, the door would open and the door would close on removal. We are taking this further but for now, we are working out the basics.

mirror cube :)
well, i guess it could be more of a prism than a mirror.

anyway, keep up the good work :)

I always appreciate how your updates nudge me into thinking " outside the box ". You always manage to humbly express the extent of careful and creative thought which truly goes into this project. I'm honestly looking forward to it.

Thank you very much! Since Blue Portals is a rather small project compared to some other mods, it gives us that time to think 'outside the box'. :)

And that 'thank you' also goes to all others who support this mod. You are all awesome! :D

This is absolutely brilliant! It's amazing what you guys can create with some creativity, and effort! It's interesting to make players think outside of the formula they already know about Portal, and make it into something new and expanded. I hope to see more from you guys soon!

The only problem is that the light emitter is ugly.

I just read the new article, the announcer is a girl?!

Ha Ha. We aim to make her more female but half the testers think shes male.