The continued Adventures of Captain Morgan lead him into the black sea... what monsters might lurk there?

The combined Retreat from the Hiigaran forces and Master Oreman loosing much of what had been Molten Ore Mining co. had been a blow. Captain Morgan had lost his prize carrier and his men were tired and disgruntled.

Captain Morgan however knew of a place. He knew where he could regain some of his former 'glory'. But he'd have to go to a dark place... a place known as the Black Sea. And by dark he really meant dark!

It wasn't long after arrival that Captain Morgan's gunners began seeing shadows on their sensors and caught glimpses of individual fighters swooping past. With all the interference from the cloud banks it was nearly impossible to identify them though.

Common sense was to shoot at them - but the pesky buggers proved hard to hit! 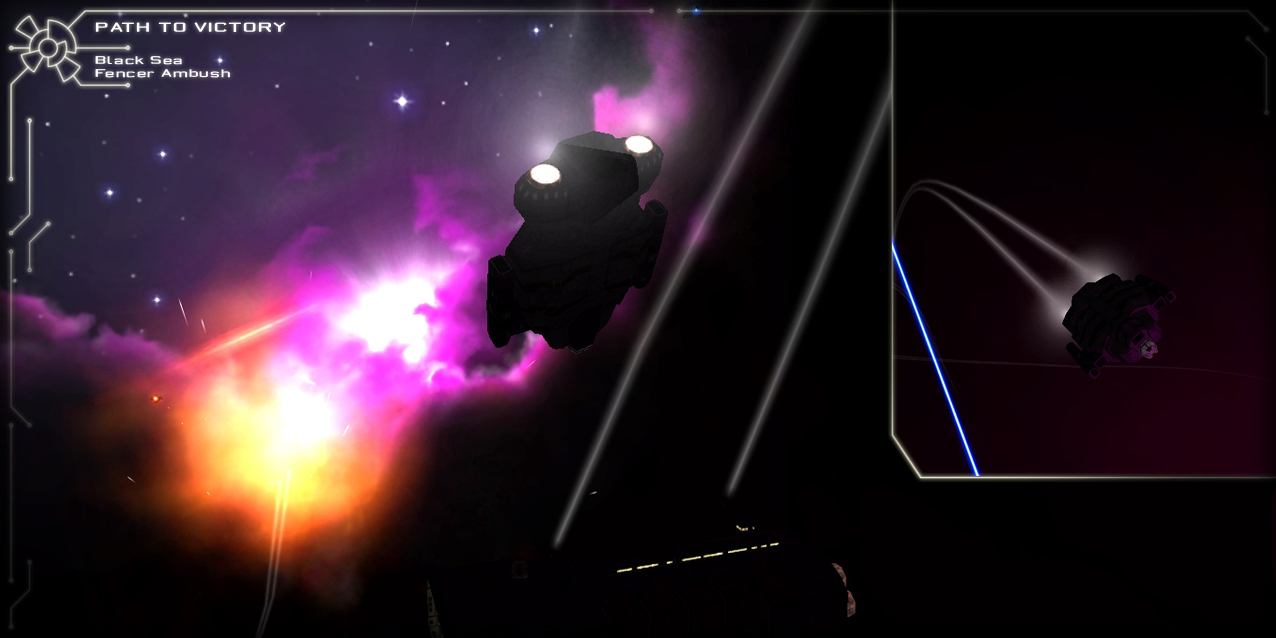 It didn't take long to drive the mystery fighters off - not that it did much good. They were back soon enough with more firepower and began pummeling what was left of Morgan's fleet with canister bombs and missile fire. 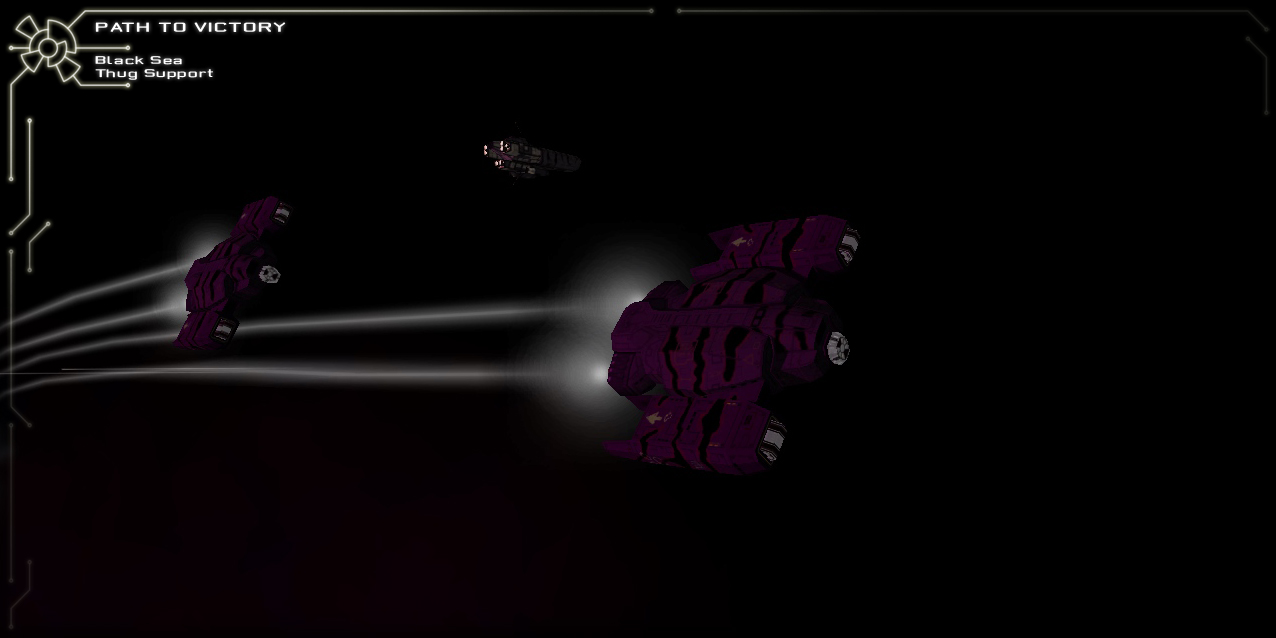 With no visible weapons flares and sensors reduced to nothing, hitting the damn things was a real nightmare - but thankfully there was Fred who just had a solution for anything: 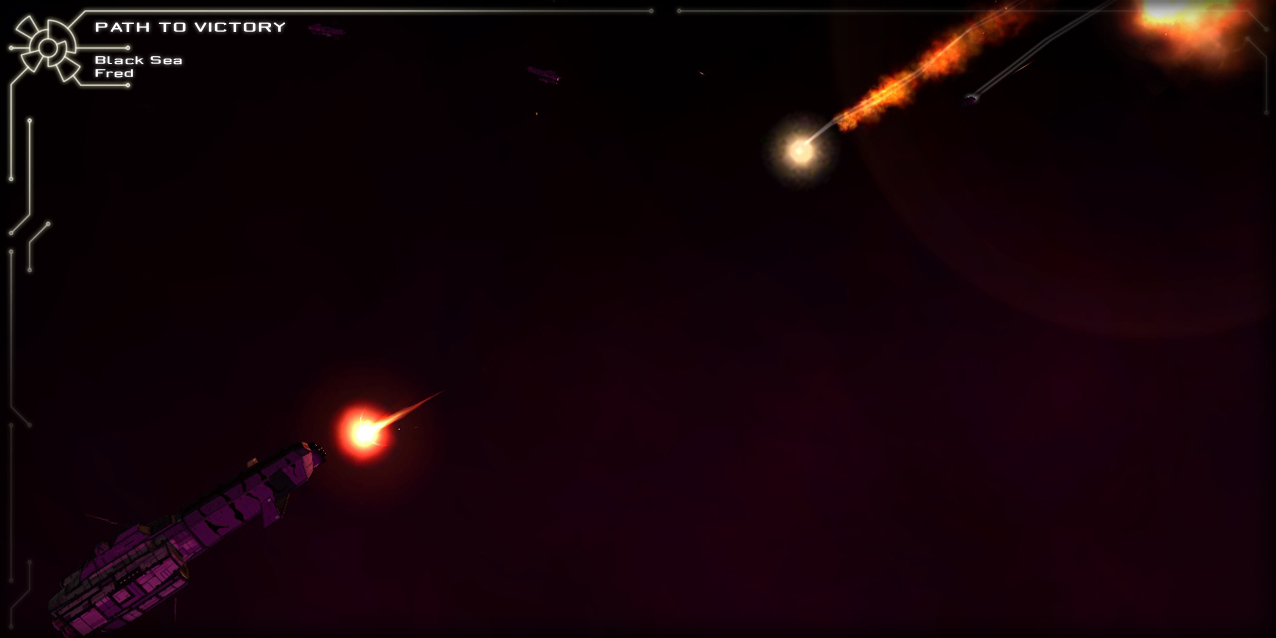 Of course, that only applies to smaller things in space. Fred soon found himself up against something a little too big even for his guns: 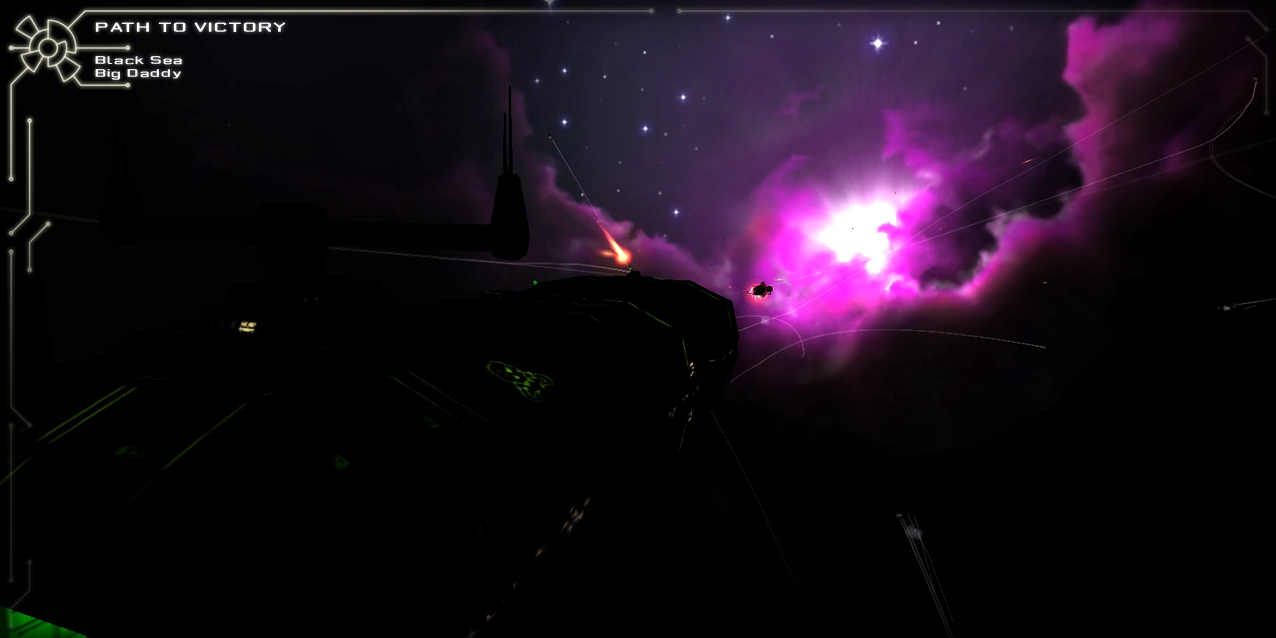 And big daddy wasn't happy. In fact, he was quite annoyed some idiots were shooting up all his 'children'.

There could be only one solution: Kill the intruders and use their flayed corpses as doormats! Not that Fred or Captain Morgan agreed but that's what the big daddy was blaring at them over the comms. Despite doing his best not to become a doormat, Fred did eventually find out that big daddy was a wee bit larger than he was: 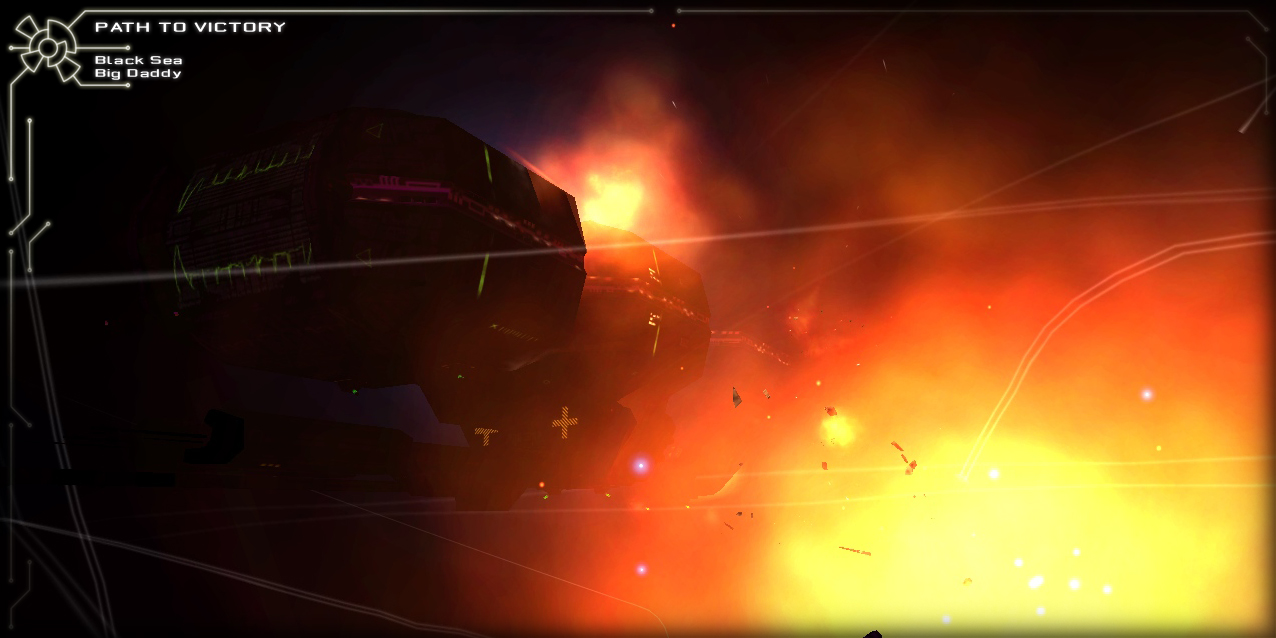 And it would be Captain Morgan's turn next! That was what Big Daddy must be thinking. But the bulky carrier wasn't quite as maneuverable as the Outlaw Morgan was riding. Add a few kegs of beer and years of experience pirating larger ships to that and Morgan was in a perfect position to keep dodging the hulking monster. 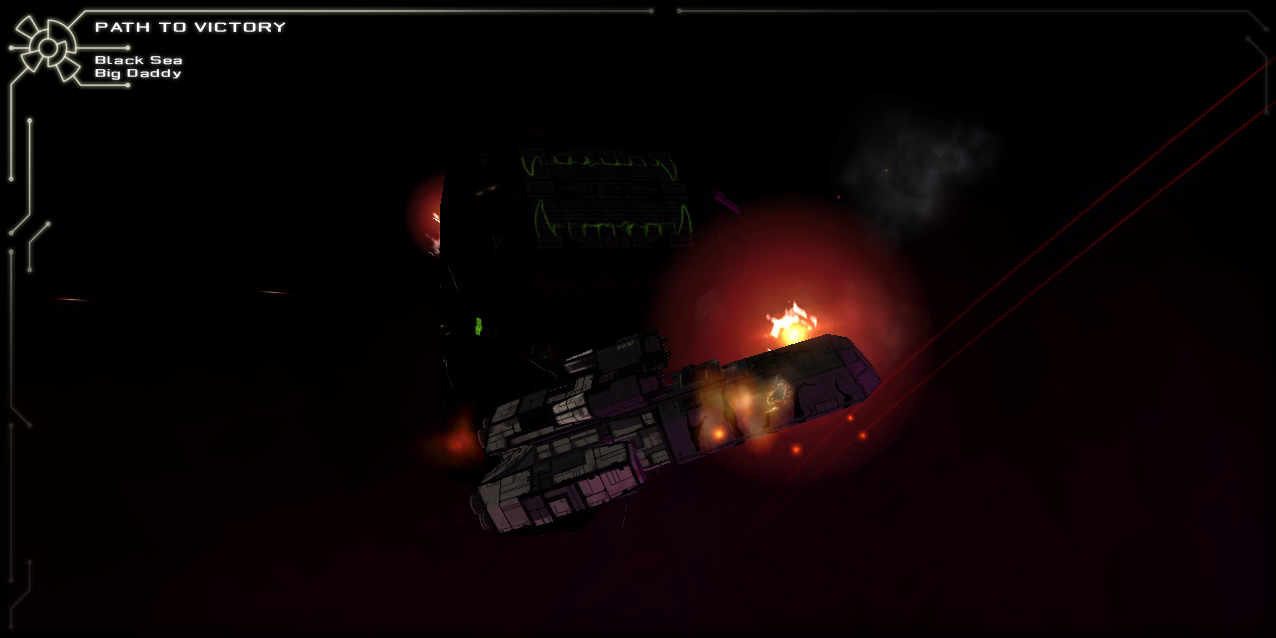 Not that it was doing him much good. Big Daddy did have guns and Morgan felt like he was returning fire with Pea Shooters. For the Love of Sajuuk or whatever other god was out there! Couldn't he actually have a good day for a change?!

A furied dance ensued with Captain Morgan dodging the ship with ever more daring maneuvers and Big Daddy tracking relentlessly. All the sudden the endless string of curses over the comm. stopped. Morgan froze in his chair, wondering what was going to happen now. Then a rather friendly voice asked:

"Oi! Why didn't you say so to begin with! We'd be lookin' to join up with ye. They say ya know how to take on the big fish! And the Big Daddy likes big things!"

Oh wonderful - now who had spilled those beans at the tavern?! 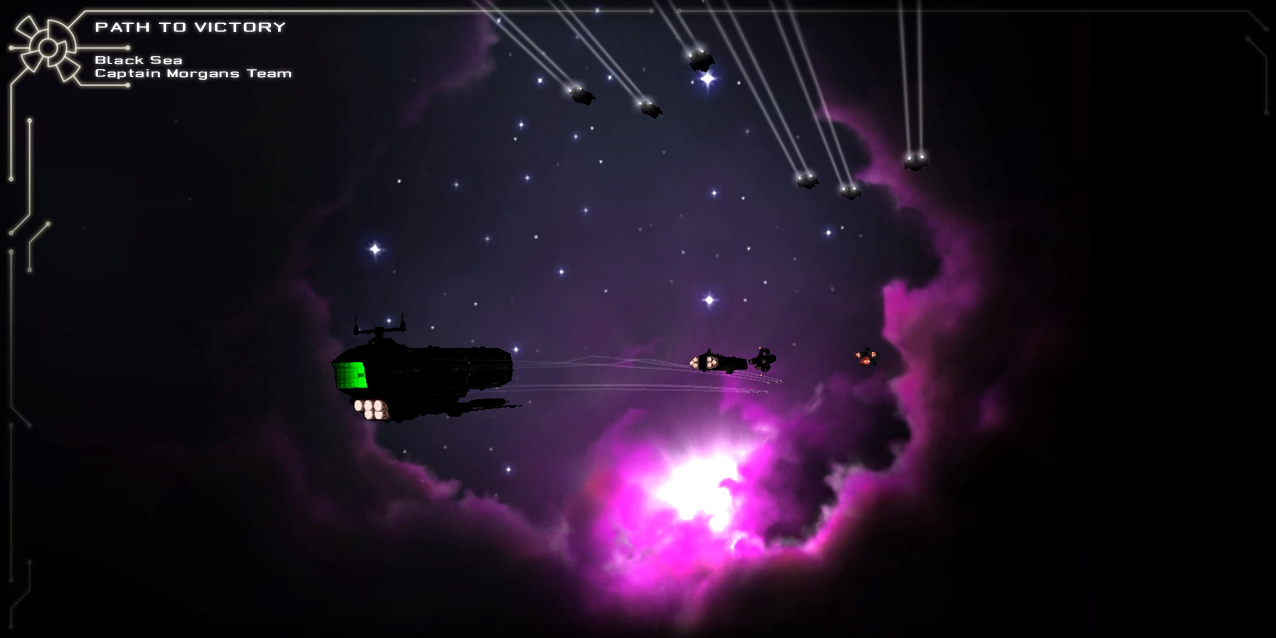 Actually - never mind. Short one Fred they'd managed to survive another day and hey - he even had a carrier again! Things were looking up...

Beginning of a true love story.

I LOVE THIS STORY,
will it get released as a campaign at any point?

I'll put forward a request, but don't count on it...

So... are we to expect a new carrier model then?

It will be in multiplayer... but I won't say more now.

I'll script it myself if it comes down to it. :)