Hey everyone, I originally intended to get this update out on Monday, I can’t believe it’s almost the end of the week already.

I originally intended to get this update out on Monday, I can’t believe it’s almost the end of the week already.

I’ll start with a few visual updates to grab your attention (before I bore you with paragraphs of text).

I posted this some time last year about the Hermit area of the Prison. As you can see, there wasn’t really much there, or even an NPC to interact with! Only recently was an actual NPC added with a conversational scene. 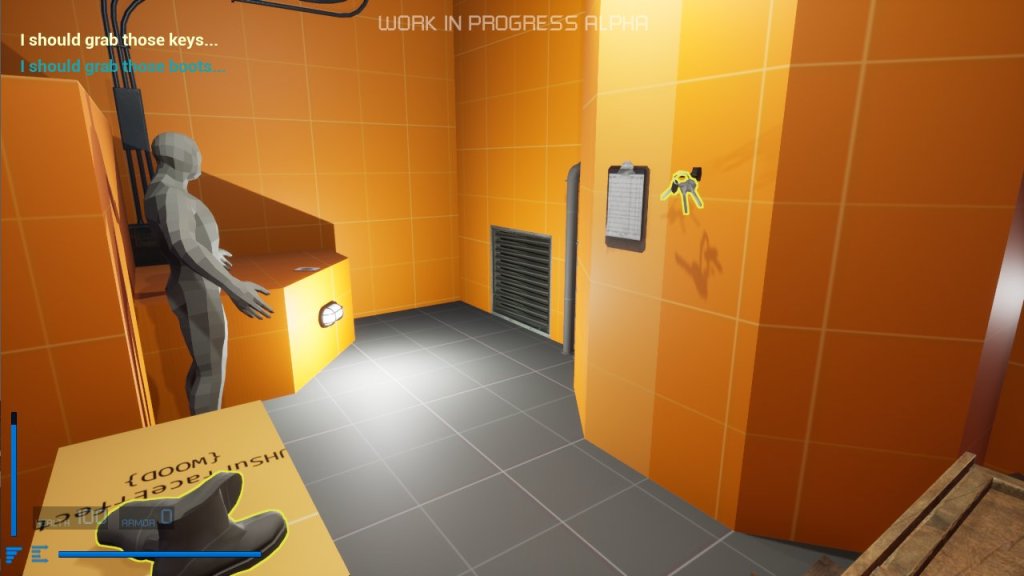 Not long ago, there was no scene, no NPC. Nothing!

My initial idea was to release something like this. It was very boring to play. No voice acting, I just had to use onscreen text to say “You will now meet the Hermit…Scene Missing” and it was rather dull. I wanted all scenes in the demo to at least be somewhat close to the original so that we can make a good first impression.

So, as this area is somewhat isolated, it serves as a good example to remind people of how these areas will be updated overtime and how this logic will be applied to all other areas (in due time)

First I added the logic needed to support the scene and NPC quest. This is the NPC, several sequences of events. This was a heavy batch of new code & systems being added and tested (both in this scene and in a debug scene)

I also have to test that everything works out as expected, comparing with the original game.

Once I’m happy with the logic, I then decorate the scene with some models, decals.

Once the scene is complete and all of the logic events are working with the A.I and I feel that there is no need for further adjustments I can say that this room is technically complete (within my current limit e.g. no facial animations etc)

I then have to do a full scale test with the scene added to the full game to ensure that the scene continues to work over time, can be returned to at any time and the quest can be completed when the criteria is met.

The next step is to create a new model for this room with added detail. The mesh used in the picture below uses the original grey BSP block meshes as the base. This is then cleaned up / redrawn. The number of vertices is increased to add additional detail / curvature. The end goal is then to test out a vertex blend material on this mesh. This allows damage, stains etc to be painted in desired locations on the model to help break up texture repetition and increase detail.

This is only a test version that I was able to put together in 3DSMax / UE4 so this is not the final version yet – but hopefully you get the idea on how these orange / grey rooms come to life.

So that all looks good, the only problem is that there are hundreds of rooms and only me to work on them. I hope that with this information you can see what the end goal will be, however understand that a lot of areas may still be very empty in the demo – simply because I haven’t had the time to do all of them!

I didn’t even cover the lighting yet, because oh that’s a whole other story! I’ll try to cover this topic again in future. There’s also the fact that we need to generate optimised collision meshes for this area, otherwise we will just fall through the floor!

Anyway! So now that the interesting stuff is out of the way we can get to the boring stuff again. I haven’t just been wasting time adding detail into this one room for the last week! That would be bad!

I have divided all remaining work into several categories:

MUST FIX: This covers any issues that cause game breaking bugs, or even fatal crashes to desktop. Things that prevent or hinder player progress and cause issues.

NICE TO HAVE: A list of things that I’d like to fix / change or improve before my time is up

ADDITIONAL TESTING NEEDED: This list is mainly a graveyard for some of the issues that should now be fixed, but I just want to make sure they can’t ever re-occur and require extra testing to try to replicate the issue.

FULL END TO END TESTING NEEDED: This is the mother of all of the above, checking that everything is still playing nicely together and that no nasty side effects have occurred.

ADDITIONAL CONTENT: Another extra list of things that I can add if I get time, these are things which don’t impact on any of the existing systems, so adding these should be relatively low risk and since they don’t have much of a dependency, I can cut them as I see fit without affecting anything else.

I’m pleased to say that I feel that I’ve done a great job of fixing a lot of the main problem areas that have been causing me a lot of issues with full end to end testing. Each day, I pick one of the major issues that’s cropped up and get to work fixing it. Initially, I had my pick of a big list of issues, but this is growing smaller by the day.

I’d like to say that it’s been a while since I found a game breaking bug – but honestly I just found one as I was typing this (don’t worry, it was an easy fix)

Seeing just how much things have progressed over these last few months has been really great. It doesn’t truly 100% feel like Underhell just yet, but every change gets us closer. We still have missing models, animations, UI, sounds etc to contend with and a lot of these are crucial in shaping how the game looks and feels to play. As the demo draws closer, I feel it’s important to remember that if something is off or doesn’t feel right – it’s probably not intentional and just limited by the amount of time or assets that I have available.

I will continue to work on polishing as much of the high priority fixes as possible and where possible. Some issues may make it into the demo build simply because trying to change the underlying system would be too risky to do so close to a potential release. It’s hard to draw the line because I want to make it as best as I can, but there has to be limits somewhere otherwise It will keep getting pushed back.

One example of this is how Frank speaks to you during the tutorial. The old system is simply playing a queued list of speeches for an invisible Frank NPC, this worked initially but it doesn’t really sound like he’s actually talking to you. Some of the new systems I have allow me to direct this audio to the player from points within the world, this makes it possible for him to talk over intercoms / speakers (and includes subtitles). This sounds MUCH better, but because I don’t want to risk tearing down the entire tutorial map – we have a bit of a mash up of both systems until I can safely swap them to the new one. It doesn’t sound too bad and doesn’t cause anything other than a bit of audio-player disconnect. It’s not important enough to delay any potential release, so it will stay half-baked for now.

It’s been a very exhausting few weeks with some very early mornings and very late nights, so I’ll be very glad when I can finally call Ready.

One of the most recent additions was the inclusion of weapon scroll support / weapon wheel. Feedback showed that when this was not implemented, players were confused about what weapons they had available. I’ve coupled this new system with some additional HUD hints that show during the tutorial and It all starts to feel much nicer and much more like a game should feel.

I’m by no means a UI designer (and this is meant to replicate the original anyway) but you can see a working version below. It doesn’t look the prettiest but it is serviceable. Like the Hermit Lair above, this is just waiting for some additional love which will come eventually, I’m sure.

I’ve also added a little credits sequence at the end of the demo and personally, I’ve rolled the credits more than 50 times by now and I still LOVE it! A lot of love has been poured into this project over the last few weeks, adding missing features and many bug fixes. With everything getting wrapped up like this, it really does feel like a tiny little game.

I’ve waffled on long enough now, I should probably get back to fixing more stuff! My list of issues is still full, so I need to continue to work through these as fast as I can. I hope that no other major issues come up so that I can update you next time with more information than just ‘I’ve been fixing things’

I enjoy watching this project progress and improve.

Thank you, i will tell Z3D to keep up the good work, and also if you want to get more news be sure to check his twitter page:https://twitter.com/UnderhellUE4 or join our discord server:https://discord.gg/yqwKZ4V