It has been silent for a long time now so I decided to write this news and picked some of the most important changes to present them to you.

There were a huge amount of changes, updates, and additions so I decided to pick up some of the more important ones to be part of this news.

Lua implementation
First of all one of the biggest additions to RPG-X is the implementation of Lua scripting as scripting language for map scripting. Even though the implementation is far from being finished (there are still many functions to be implemented) it already opens new possibilities for mappers. There are several Lua functions available starting with all mathematical functions available in the Elite Force game code over entity manipulation and even spawning entities as well as moving objects around. In addition to the use of Lua scripting for the mapper it can also be used to make the single player maps more playable in RPG-X as well as adding new RPG-X features to older maps.


rpgxEF
rpgxEF is an ioEF fork with many enhancements. Some examples are a bloom effect, a frame buffer, enhanced developer tools. But the biggest change are the increased limits for game state, model count (brush entity count), and many more. Even though it is no official Ubergames project yet it is used by many Roleplaying Groups now.

SQL User Management
RPG-X has now a build in SQL User management. The User management uses a SQL client the is build into rpgxEF to allow users to log in on a server. Server admins can adjust the access rights for every RPG-X admin feature. The SQL User management currently is based on mysql. In order to be able to provide this feature to non rpgxEF users the SQL implementation is currently moved from the engine to the game code and sqlite is implemented in addition to mysql. Once this is done server admins will be able to choose between using mysql and a mysql server or using sqlite. 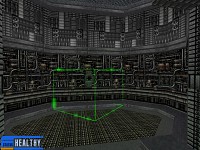 New features
func_lightchange is a new entity coming along with the func_brushmodel entity. These two entities can be used to simulate a lighting change. The use is quite limited though due to the engine limits.


ui_transporter is an entity that calls a Transporter UI similar to the Turbolift UI which allows to activate a trigger_transporter entity and beam someone (one person, a group, yourself) to a location on the map or even beam out the group and connect them to another RPG-X server.

Tutorials
Due to request we started creating tutorials on how to add/use new RPG-X2 features as well as other RPG-X2 related stuff. You can find the tutorials in our RPG-X Mapping Forum.

Cool. Thanks for the update.