Sol 0 is a Mars colonization real time strategy game where you develop the first Martian colony. Sol 0 imagines the near future, with technology that could be available in the next decade.

Sol 0 is now on Greenlight! If you like what you see here, please CLICK HERE to vote and help bring Sol 0 to Steam!

Sol 0 is a Mars colonization real time strategy game where you develop the first Martian colony. In this article we will show off a few of the basic units and buildings that are needed for a self-sustaining colony. 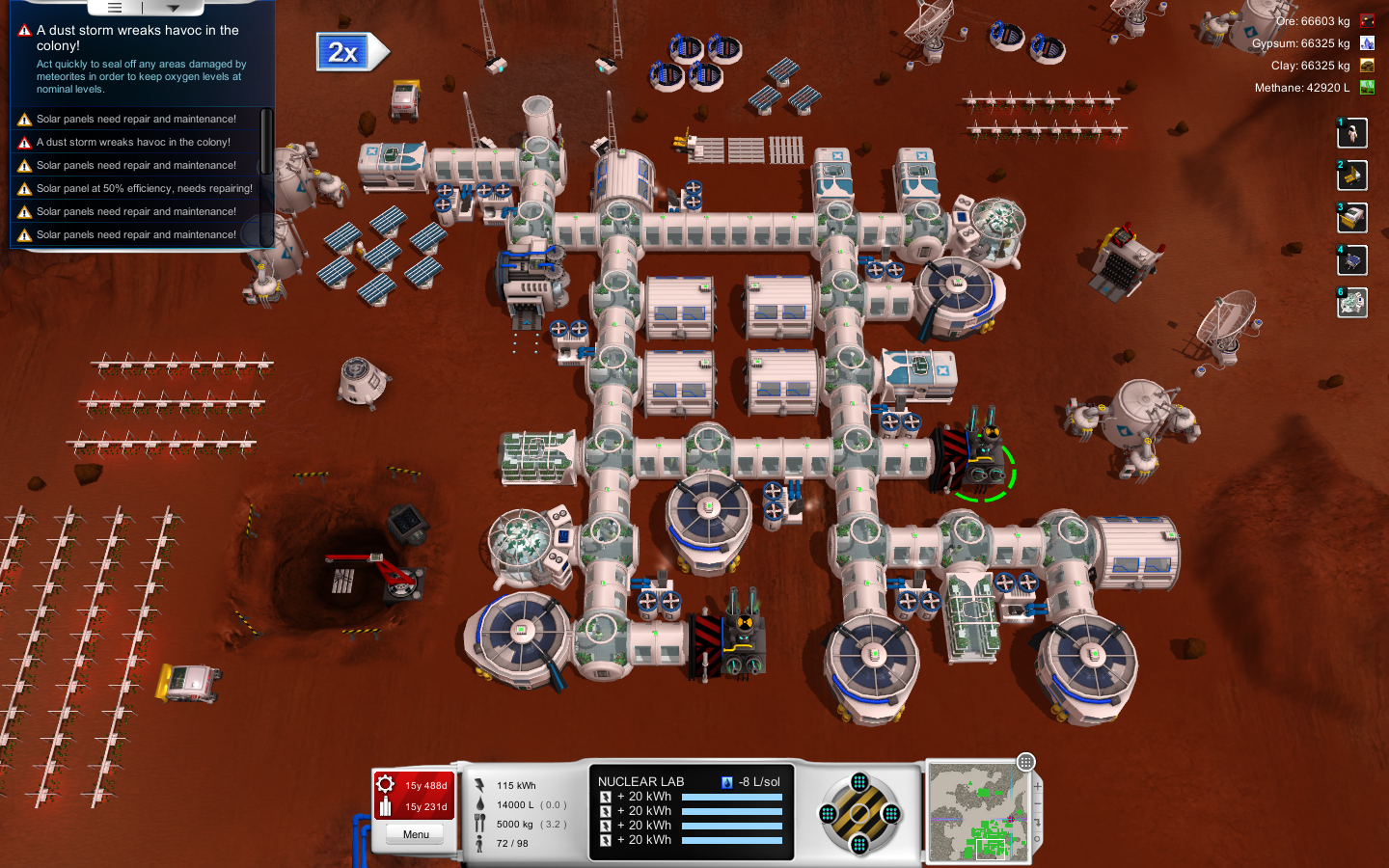 The basic survival needs for humans can be distilled to air, water, food, and shelter. In Sol 0 each of these requirements must be managed. The Martian environment is cold and hostile, and it is essential to carefully plan ahead. There is not a river flowing by with free water, and there is no air to breathe outside the hallways of the colony. In the early days of the colony life is very fragile. If the colony runs out of water or food, colonists will perish. If an air leak causes the oxygen levels to drop too low, colonists will perish. As the colony grows it will become more resilient and accumulate a reserve of resources.

To keep everything running smoothly the colony needs a source of power. There are three sources of power in Sol 0, starting with the solar panel. Solar panels are less efficient on Mars than Earth, due to the reduced solar flux, but they are lightweight and cheap. Solar panels will accumulate dust over time, and must be regularly cleaned. Geothermal plants are a step up from solar panels, and may be constructed once a geology lab has been built. Late-stage colonies can develop nuclear power. The only thing to worry about is the radiation, but if we've developed the technology to survive the radiation environment on Mars we can probably handle a nuclear power source.

Sol 0 allows the player to control a variety of units. Generally, the bigger the unit the heavier it is, and with rockets mass is everything. The larger heavier units like the dozer and miner can only be brought to Mars after the colony sets up a launchpad to allow larger rockets to land. That means some careful colony planning is needed initially to build around Mars boulders until the dozer can clear space for unimpeded construction.

Scientific Research on the Martian Surface

One of the primary motivations for starting a Martian colony is to conduct scientific research! In Sol 0 research occurs at the geology lab and biology lab. The goals of research are to increase the survival of the colony, and include developing armor for habitats and hallways to survive micrometeorites and dust storms, and cross-breeding bacterial strains to allow farming on the Martian surface.

There are more features that have not been discussed, and more buildings including radar arrays, ore mines, 3D printers, and terraforming projects. Sol 0 in a few cases strays into concepts that might be considered science fiction, but most of the game is grounded in our current understanding of how the first humans will survive on Mars. Someday there may be Martian cities with tens or hundreds of thousands of inhabitants, but Sol 0 is about the first few hundred and the challenges they face to survive and become self-sustaining.

If Sol 0 sounds interesting to you, feel free to visit the website, join the discussion on the forums, follow on twitter, or support us on Greenlight.