The news and updates about the Barbarian Empires: Hellenistic Legacy mod progress and implemented/planned features.

Hello dear players. I know many of you waited patiently for months for the promised update for Barbarian Empires: Hellenistic Legacy mod. However, the challenges of the past year and the well-known events which we are all tired of, have the development of the mod delayed severely. At some point, though, the update grown from a simple pack of bugfixes and improvements to a huge full-scale new version, where the amount of changed and added files counts in hundreds, if not thousands. Good news are, you'll like the changes a lot. Bad news though, I can't promise to release the project soon. It may take another month or two - and since the Rome Total War: Remastered will be released at the end of April, and many will switch to modding/playing it, the release of Hellenistic Legacy may be just too late for some of you. I'm sorry for that.

I don't have a team to help me with the project, and I do 95% of work for the mod alone. Being a perfectionist doesn't help either. I know that currently released version of Hellenistic Legacy has many flaws, and in the new update most of them are already fixed, while a lot of new content is/will be added, and existing content is/will be enhanced to match the most recent units details and quality. This all requires time, though, and ambitious goals like this make it impossible to just release a beta and be happy with it. I will, however, publish a series of articles with the previews of the changes and updates, so expect some cool content showcases! Some of the previews/WIPs are already known to RTW Discord Community regulars, but some will be brand new content created recently. As for this article, I'll briefly explain some of the gameplay features changed/added in the new version of Barbarian Empires: Hellenistic Legacy.

There are dozens of new units added to the new version. Each comes with polished UI, factional textures, LODs and other goodies to match the quality of the rest. Old units were updated with new small visual 3D enhancements, like 3D shields, shoulder belts, scabbards, javelins attached to the shields, shield bosses, new plumes, new officers and sometimes with completely redesigned look. It was hundreds of hours of work! 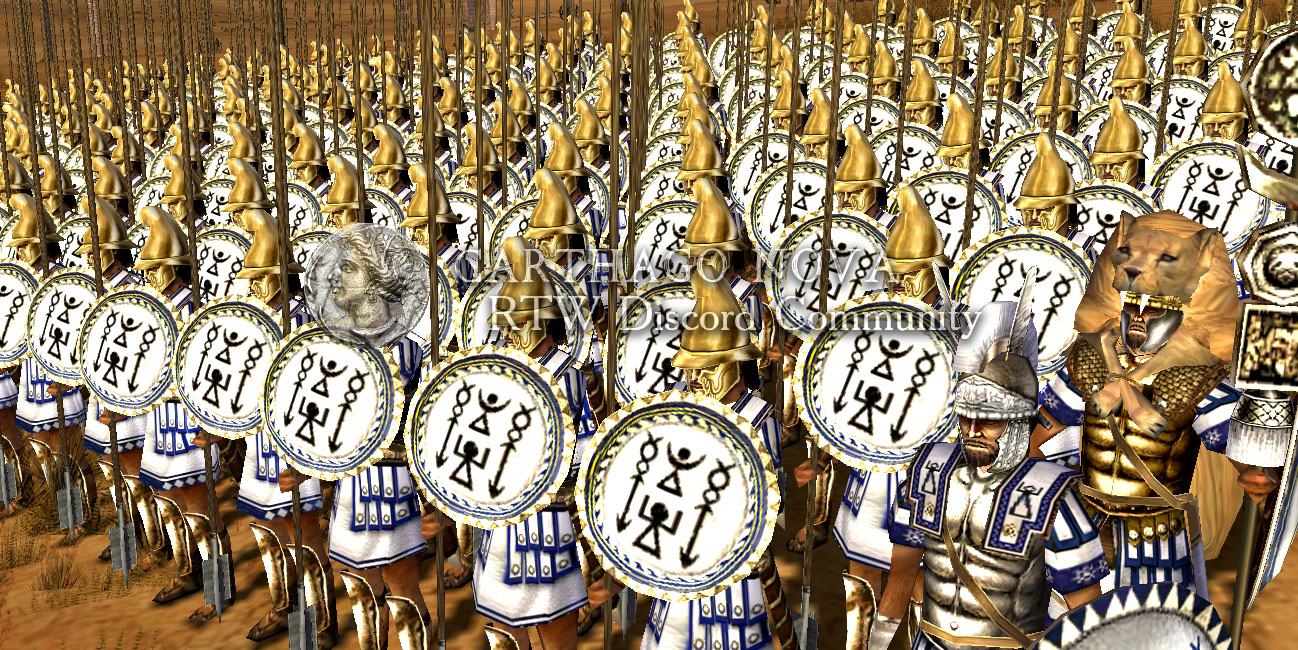 Carthage faction was reworked. It received many new units, three tiers of officers and standard bearers, and its recruitment was redesigned completely. Some of the new units can be previewed in the gallery if you scroll it a bit. Liby-Phoenicians received their own subroster, with their own archers, swordsmen, spearmen etc. You can also check the updated looks of Carthage in the video voiced by Skynet Bunker (see media section!) 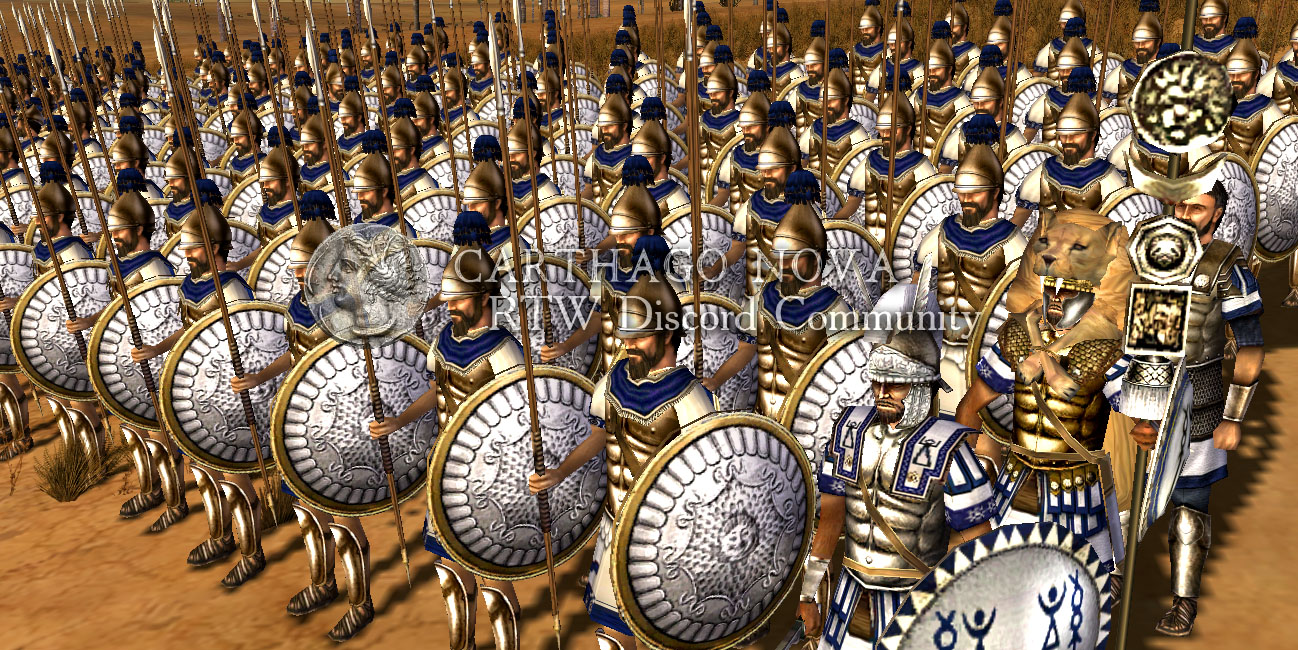 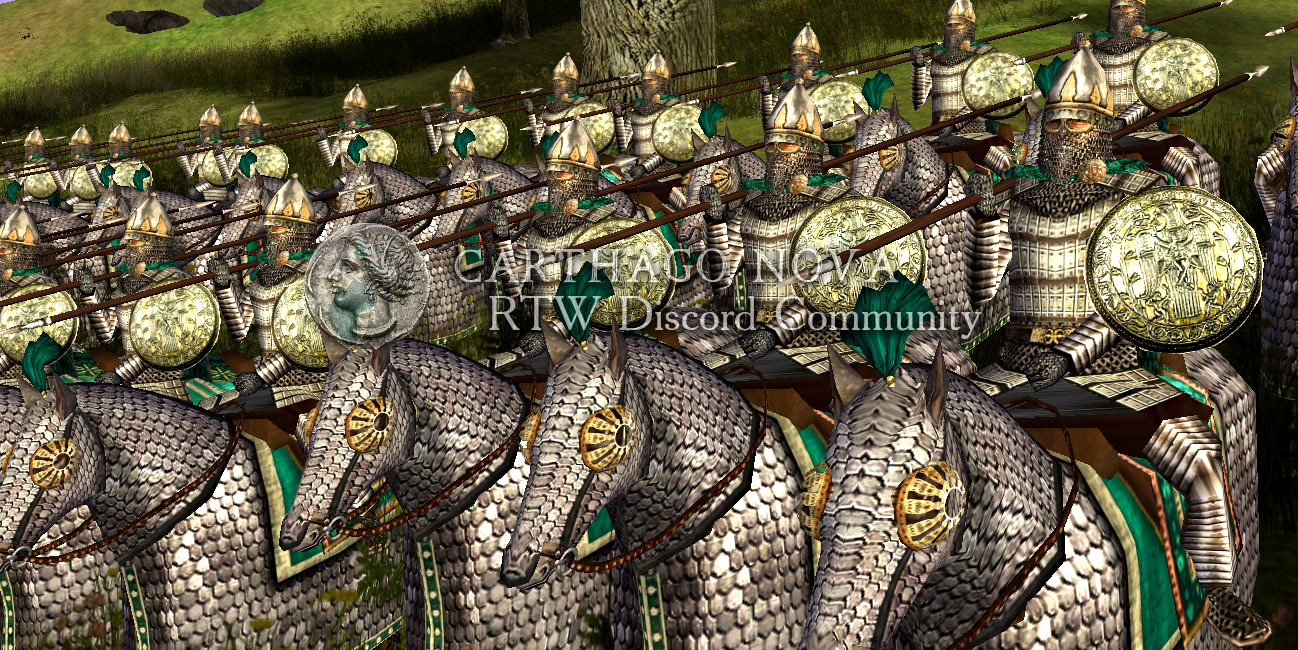 Baktria received new skins and designs, also the famous Baktrian Cataphracts with palm leaves attached to their back. New faction symbol of Baktria, goddess Lakshmi, refers to the coins of Basileus Agathocles, and reflects the major importance of indian influence in the life of this kingdom (later Indo-Greek kingdom). The player will receive an opportunity to have some indian auxiliaries if he conquers India, as well as nice economy bonuses! 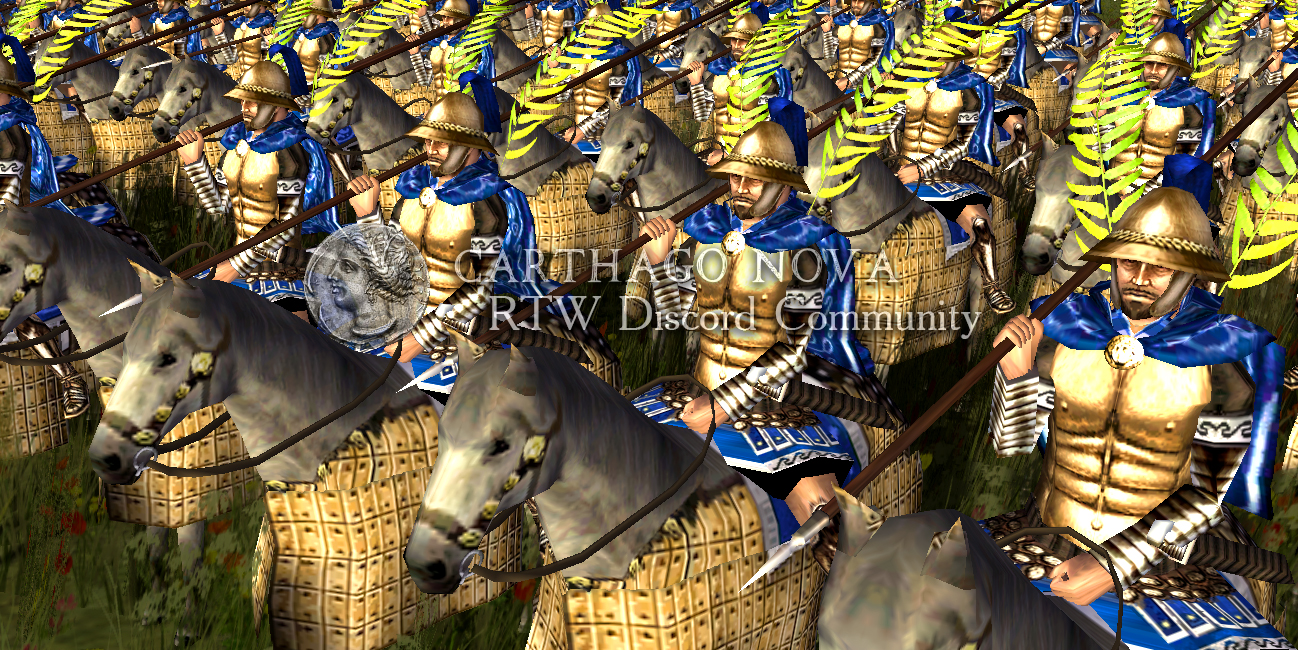 A lot of questions from players were about the tough rebels in the mod. While some liked the challenge, many did not, and the biggest complaint was that certain smaller factions like Dacia, Parthia, Armenia have difficulties expanding their territories. This aspect has been reworked by adjusting the starting positions of factions, and adjusting the starting rebels depending on the starting player location (i.e. if you start as Iberia, the surrounding rebel armies will look different for you than they will look for the AI Iberia if you start as a different faction) - this is done by a simple starting reshuffling script which came out very nice and handy. As an addition, I've added unique battle flags for all 20 rebel factions in the mod, as well as unique empty city rebel flags and unique rebel faction captain banners. While not so a game-changer, this boosts immersion a lot, as now you will know that you fight not just generic rebels but certain "minor factions" related to yours, or anyone else's. 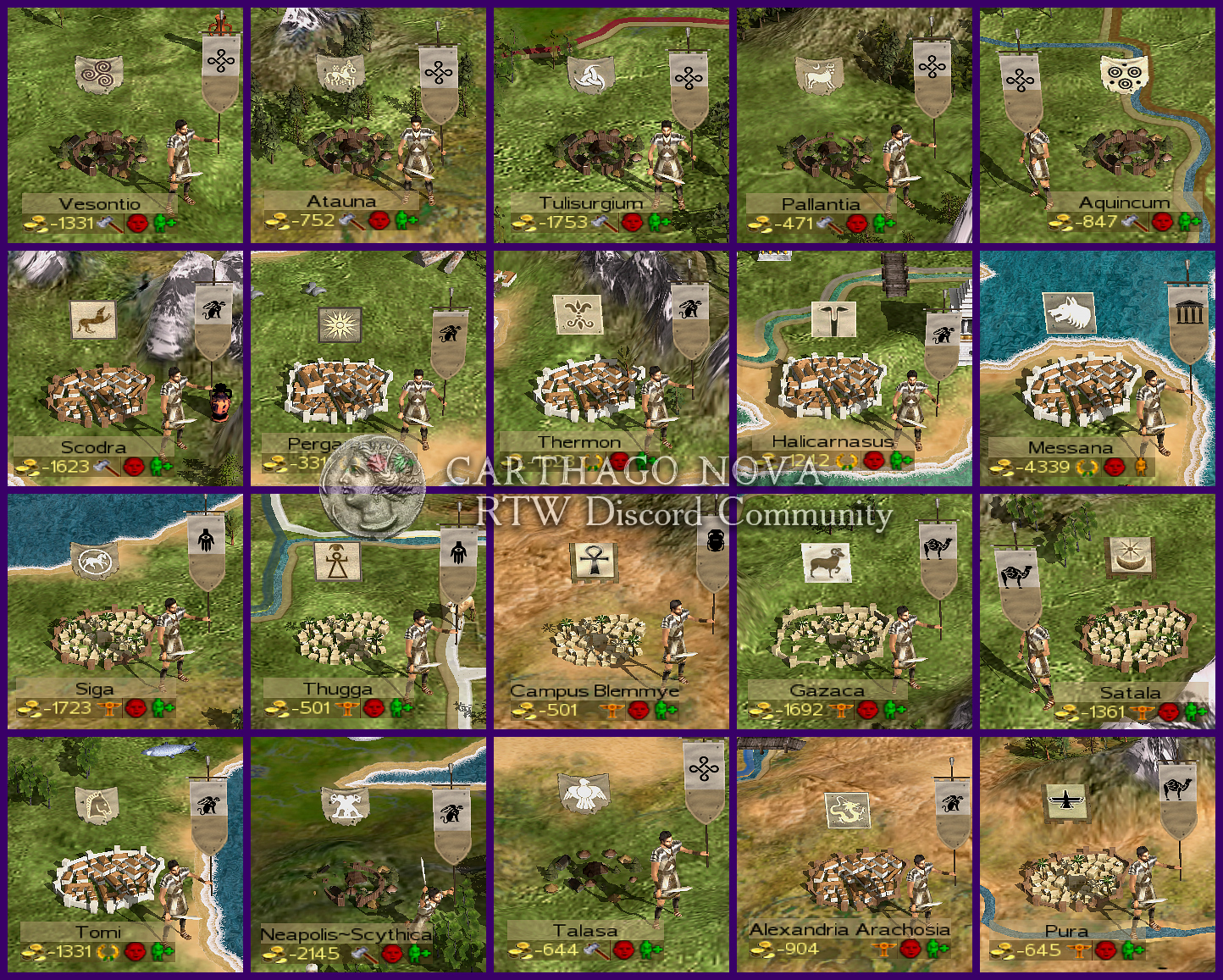 The big gameplay changer was the landbridges feature. A grand total of about 14 or 16 landbridges was added throughout the map, to make sure the AI can expand where it wants without the need of building a fleet. While controversial, this feature was the only solution to fix the poor naval invasion AI on Rome Total War Alexander engine. And thanks to this change, some really unexpected invasions may now occur, like Carthaginians invading Britain, or Romans invading Scandinavia! I had a lot of fun testing the AI campaigns and seeing the AI progress. Campaign victory conditions were also overhauled, to make more sense for a certain selected factions, as their real life ambitions in most cases weren't about the coloring of 80% of the map, but about pursuing certain strategic goals, and expanding in certain directions. 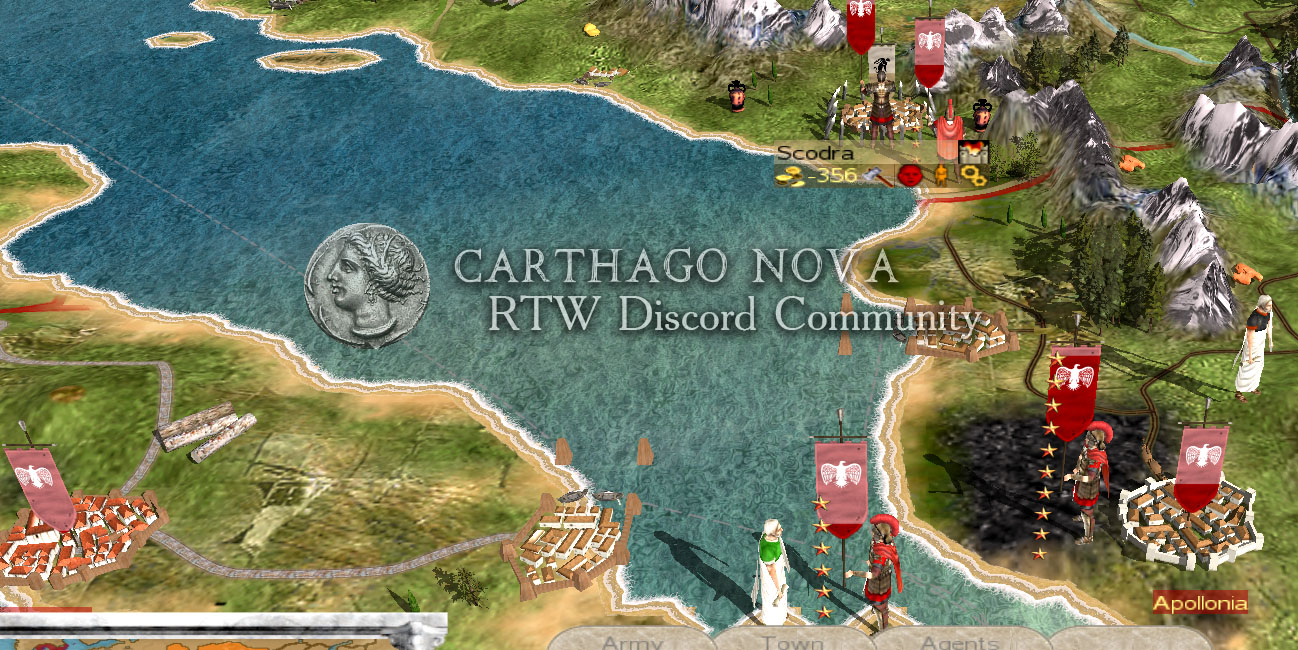 Crazyroman added lots of traits from XGM, so now the characters are not so dull and generic as in vanilla Rome Total War. I've also added a special trait related to current season in the campaign. If it is winter, there will be penalties to commanding skills, but bonuses to economy (management skills), and vise versa. At summer, more casualties could be recovered from the battlefield if your armies are commanded by family members (doesn't work if it's just captains). This inspires to keep the generals garrisoned during winter, providing additional income, and to have main battles fought during summer season, like it was in history. 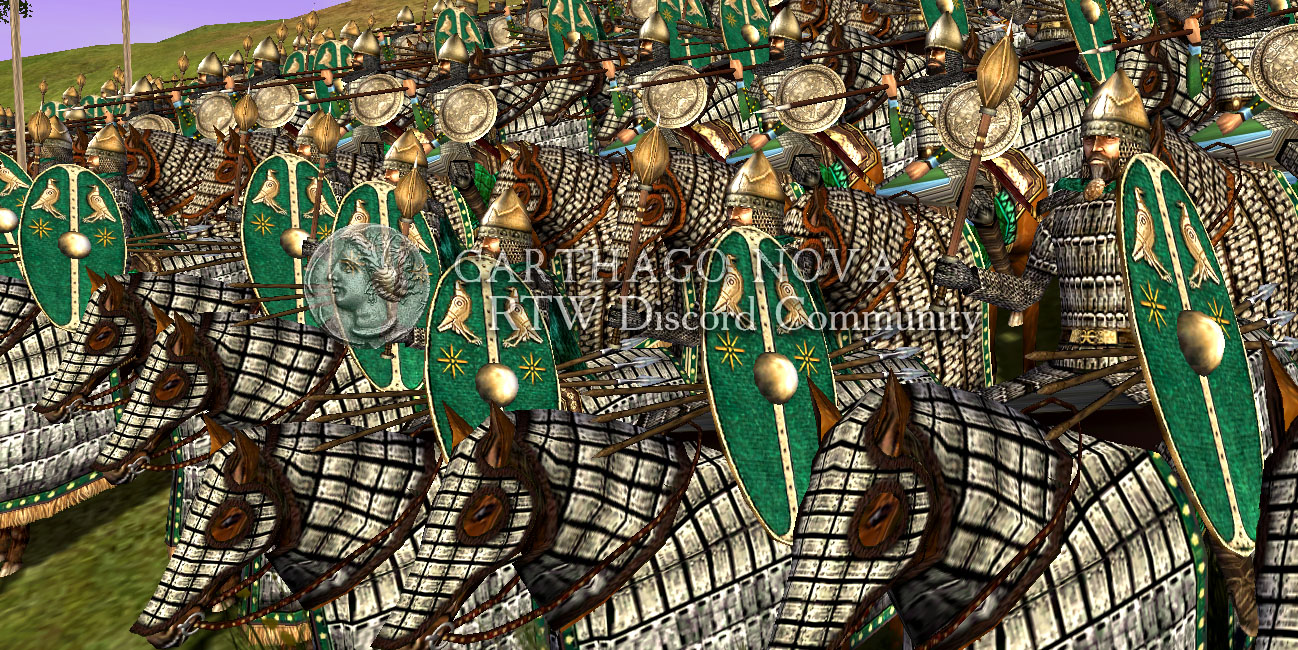 Battle gameplay was one of the biggest changes. All units now have better morale and fight longer. Arrow accuracy has been lowered, and arrows no longer have armor piercing attribute, as it leads to predictable late game and OP veteran archer troops. Every single unit was reviewed and it's stats readjusted to match the units looks and nature. Every unit received proper ground bonuses for certain terrain conditions, depending on the culture and origins of the unit. For example, barbarians have bonuses in woods and snow, but penalties in the desert, while eastern units fight better in the desert, but have difficulties expanding to northern barbarian lands. Now you will have to plan your army compositions when organizing certain campaigns, and recruit auxiliaries which fit the terrain better where you have such an option. With various new added mercenary types, this will be viable! 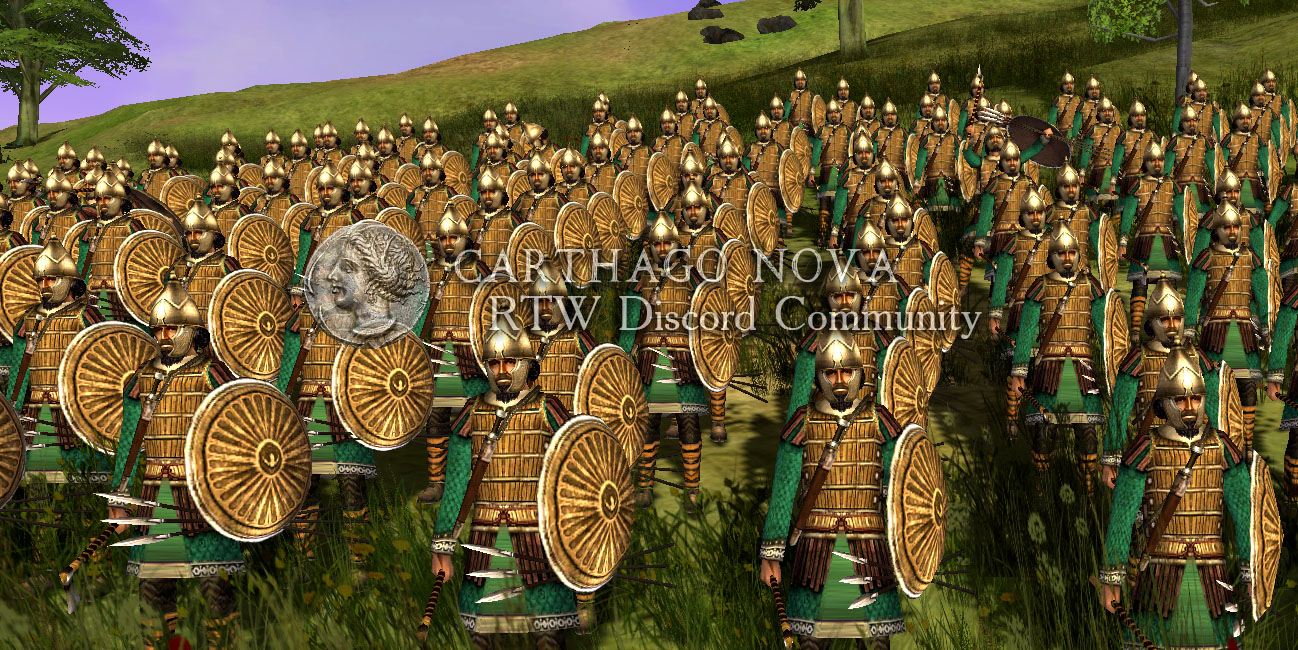 There's a new building in campaign now, Auxiliary Barracks. It allows you to recruit auxiliary units which have a strong historical bonds with your faction, aka semi-integrated auxiliaries. For example, as Carthage you could train iberian auxiliaries there, as Epirus - italic and illyrian auxiliaries, et cetera. This type of building serves as a colony of the most reliable allied forces in the region where you need them. Also the elephant units will have now an option to be retrained even in the provinces where there's no elephant resource, thanks to the highest level of Auxiliary building, but this level will be quite expensive and the feature is pretty balanced.

Tons of new mercenaries were added to the campaign, especially in the eastern, steppe and barbarian lands. These regions were lacking in many aspects, and now they look more diverse and capable, and there's a reason to go there and grab new nice looking soldiers to your armies.

Some other notable changes in the gameplay are:
+ Population growth was halved throughout the map, so now there will no longer be a boom in economy and boring population management like in some of the previous versions.
+ Removed 4tpy script, as 2tpy reflects the faction progression in the campaign more "historically", as well as it allows better dynamic in the family tree.
+ Lowered building costs and construction time accordingly
+ Rebalanced ship costs and recruitment times
+ Tweaked building bonuses

...and many more!
I'm very sorry for the long radio silence - as you all may have noticed, I'm clearly better with modding than with advertising my hard work. Just posted the article to let you know that the work on this mod hasn't stopped, and that I still use every bit of a limited spare time to give more love to the mod. Expect more news and updates in the future!

Looking forward to the updates!

Cant wait to see the funny Traits "Eagle Collector" And Hidden from the World. Hahahaha! Great Job on the rework. Time to see some Macedonian Style Carthaginians.