In Half-Life 2, while assaulting Nova Prospekt, if you spawned citizens nearby your antlions, both parties will attack each other, regardless of the player's control over the antlions.

This is understandable, since Valve did not intended to have rebels fighting alongside antlions.


This is not the case in Badass Combine, however. Here, you can have Resistance fighters and allied Combine forces coexisting with your antlions.

1) You can spawn Resistance medics, demonstrated from beginning, but confirmed at 00:43.
2) Antlions no longer one hit kill Combine Soldiers, this is best evidenced at 01:03.

Talking about allied Combine, you can spawn Civil Protection Officers to your side, as the video below demonstrates.


Also, CPs can now properly use the AR2 pulse rifle and shotgun. 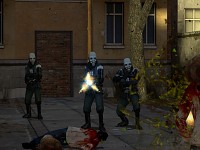 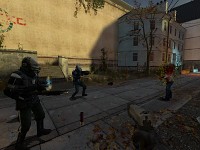 When NPCs are alerted, their reaction is far less robotic than in HL2.


And last, the difficulty changes are now expanded beyond simply damage/hit-point/ammo changes.


Easy Difficulty: HEV Suit absorbs 100% of damage, preventing you from flinching while hit.

Medium Difficulty: HEV Suit absorbs 80% of damage, no longer preventing you from flinching while hit.


Easy Difficulty: No recoil/view punch for all weapons, pistol's dynamic spread disabled, the shotgun is now a semi-automatic only weapon, no bullet drop for crossbow, RPG's rocket ignition is instantaneous.

can this work for cinimatic mod?

If you're playing cinematic mod, you have a lot more problems than sub par combine AI and gunplay.

And what problems would those be?

he's just a SJW concern troll. Please developer will this mod work with cinematic mod or not?

The ignorance is strong with this one.