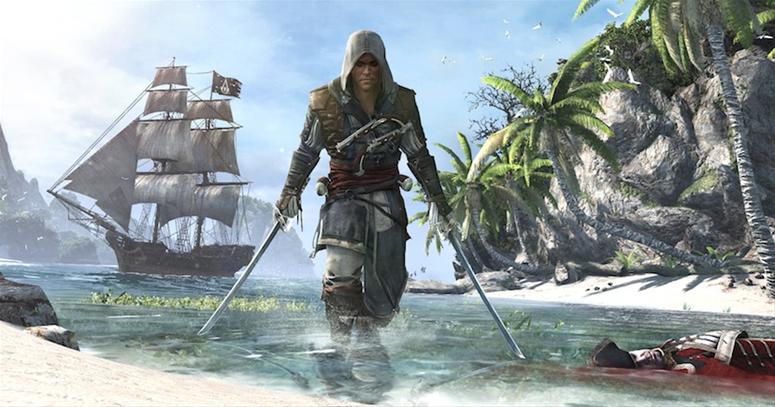 Dance between PR people and journalists are sometimes both intimate and Klein. The last week they have been seeing a ton of leaks around Assassin's Creed IV: Black Flag from Ubisoft. If there is talk of a carefully planned PR-round dance or actual leaks are really only Ubisoft knows. First, today, the publisher released the first official details about the game 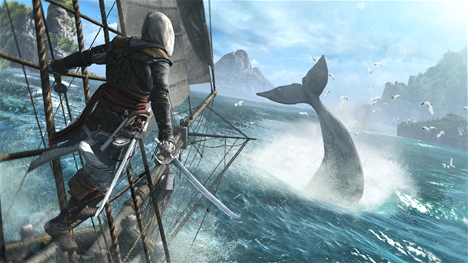 According to the press release from Ubisoft, the game has been in development for almost two years. Ubisoft Montreal's boss facility for development, but also Ubisoft studios Annecy, Bucharest, Kiev, Quebec, Singapore and Sofia have contributed. 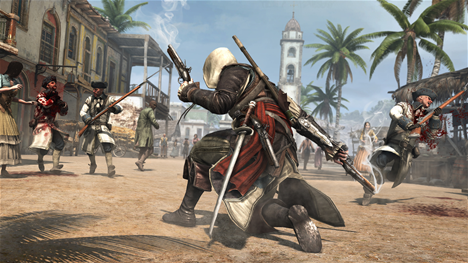 The game has been officially announced for Xbox 360, Playstation 3, Playstation 4, Wii U and PC, all versions except the Playstation 4 version will be launched on 31 October.

- With a new hero and a new setting, they have made ​​the boldest and most unique Assassin's Creed game so far, while respecting the foundation of the franchise that has made ​​the series a fan favorite. Assassin's Creed IV is based on a real, raw and exciting part of a legendary era and will please both established fans and newcomers, claims Ubisoft boss Yves Guillemot. 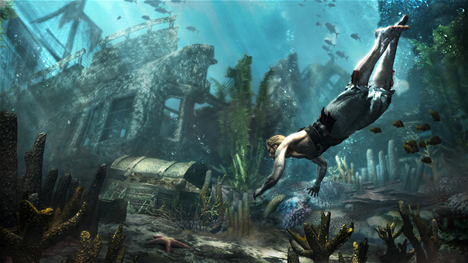 The story is about Edward Kenway, a young man who has previously sailed for the British Navy but ends up being a pirate when the war he has been a part of coming to an end. In addition, he is involved in a conflict between assassins and Templars. The game takes place in the eighteenth century and famous pirates from reality that Blackbeard and Charles Vane will emerge.


Ubisoft says the game area - the Caribbean - will be open with over fifty locations you can travel to. 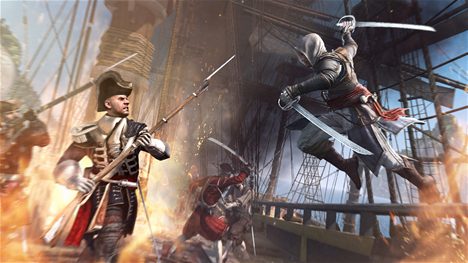 Playstation 3 - and 4-Playstation versions of the game will contain sixty minutes extra content
For single player portion that can be downloaded.

Here you can see the launch trailer for the game 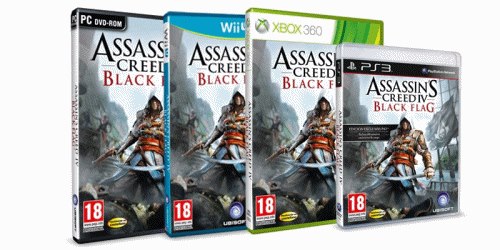 Assassin's Creed IV: Black Flag was developed by Ubisoft Montreal and published by Ubisoft.
The game launches on Xbox 360, PC, Playstation 3 and Wii U 31 October and the Playstation 4 later. 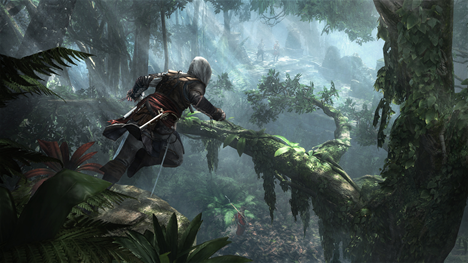 “With the new hero and new setting we are creating the boldest and most unique Assassin’s Creed game yet, while still respecting the pillars of the franchise that have made it such a fan favorite,” said Yves Guillemot, chief executive officer at Ubisoft. “Assassin’s Creed IV Black Flag is based on a true, harsh and exciting part of a legendary era and will thrill longtime fans and newcomers alike.”

Assassin’s Creed IV Black Flag tells the story of Edward Kenway, a young British man with a thirst for danger and adventure, who falls from privateering for the Royal Navy into piracy as the war between the major Empires comes to an end. Edward is a fierce pirate and seasoned fighter who soon finds himself embroiled in the ancient war between Assassins and Templars. Set at the dawn of the 18th Century, the game features some of the most infamous pirates in history, such as Blackbeard and Charles Vane, and takes players on a journey throughout the West Indies during a turbulent and violent period of time later to become known as the Golden Age of Pirates. 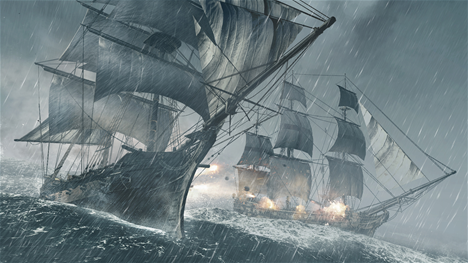 Customers who purchase Assassin’s Creed IV Black Flag on PlayStation 3 or PlayStation 4 can download 60 minutes of additional gameplay via the PlayStation Network after the game’s launch.

Collector’s Editions of Assassin’s Creed IV Black Flag will be available in the EMEA region. More details will be unveiled by the end of March.

About Assassin’s Creed:
About Assassin’s Creed: Initially launched in 2007, the first five Assassin’s Creed games have sold more than 55 million units worldwide, and the franchise is now established as one of the best-selling series ever. Recognized for having some of the richest, most engrossing storytelling in the industry, Assassin’s Creed transcends video games, branching out into other entertainment experiences including comic books, mobile games, novels, as well as a feature-length movie currently in development.
© 2007-2013 Ubisoft Entertainment. All Rights Reserved. Assassin's Creed, Ubisoft and the Ubisoft logo are trademarks of Ubisoft Entertainment in the U.S. and/or other countries.

About Ubisoft:
Ubisoft is a leading producer, publisher and distributor of interactive entertainment products worldwide and has grown considerably through a strong and diversified lineup of products and partnerships. Ubisoft has offices in 26 countries and has sales in more than 55 countries around the globe. It is committed to delivering high-quality, cutting-edge video game titles to consumers. For the 2010–11 fiscal year Ubisoft generated sales of 1.039 billion euros. To learn more, please visit ubisoftgroup.com

“PlayStation” is a registered trademark of Sony Computer Entertainment Inc.

Kinect, Windows, Xbox, Xbox 360, Xbox LIVE, and the Xbox logos are trademarks of the Microsoft group of companies and are used under license from Microsoft. 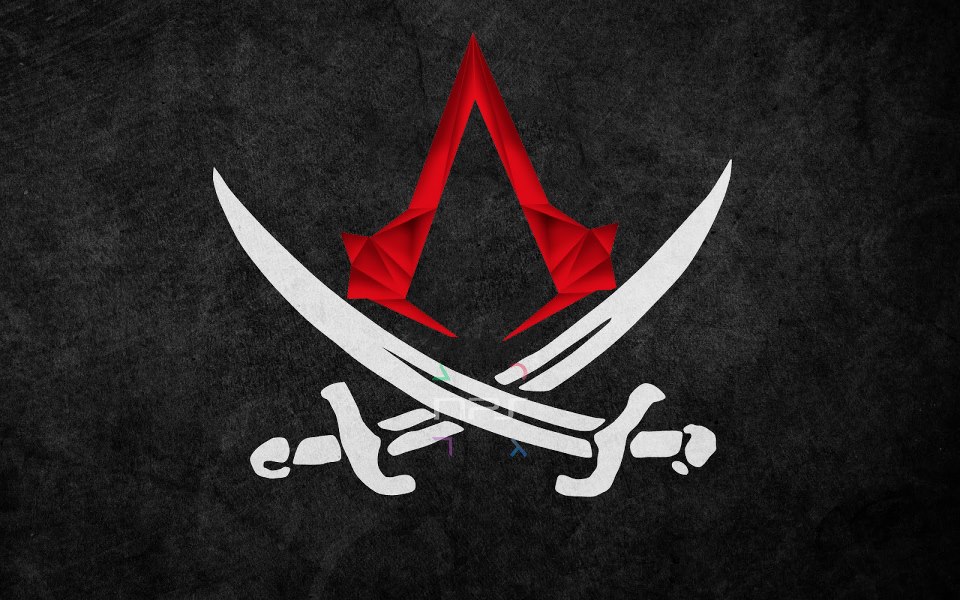 The naval combat was by far the best thing about AC3. Glad to see they're doing more with that. :D

if they overuse it, then it will get repetitive....there is a reason why there was only a few missions involving Leonardo's inventions in AC2 and Brotherhood.

I dont wanna see another AC game, it hasnt even been a full year since AC3 was released.

It's not like they're releasing it tomorrow... It launches October 31st. Plus, it's not like they're forcing you to buy it. Could you imagine if your favorite food took a month to make and then they started making it even faster with the some better qualities? It would be pretty awesome, wouldn't it?

The yearly releases completely killed my interest in the AC series, to be honest...

yes but i think he is also hinting at the possibility of Ubisoft rushing the game and hence ruining the entire series....