Welcome to another update from Anarchy Productions, in regards to the modification entitled as the Assassination Mod, which is currently in development by us. The team has been working hard, and in today's update for the modification, we have more than a dozen items to present to you (Including new + updated props, updates on the levels that are to be included with the mod, and more), as well as updates on the modification/team status (Including a recruitment notice), and the announcement for ou

Welcome to another update from Anarchy Productions, in regards to the modification entitled as the Assassination Mod, which is currently in development by us. The team has been working hard, and in today's update for the modification, we have more than a dozen items to present to you (Including new + updated props, updates on the levels that are to be included with the mod,La and more), as well as updates on the modification/team status (Including a recruitment notice), and the announcement for our new website.

Team Website
We have recently pulled together a simple website for the team, which includes several pages detailing various things, such as the current projects that we are working upon, and a page giving detailed information on the team. The website is currently located at Anarchyproductions.org. Below is a list of the pages shown on the navigation bar of the website, as well as a short description beside the page name. 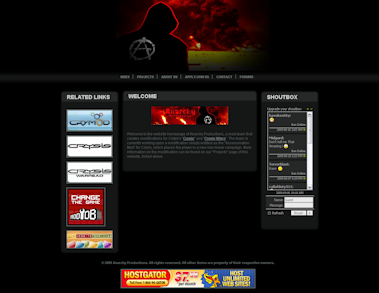 WIP - Props
The next section of items, this section, consists of several props that we have created. Props are, of course, an important part of any modification. The several props that we have here today consist of eight new props, as well as two updates on previously shown props. These props are of a signature wall in Chernobyl/Pripyat (With the prop itself being, obviously, for the Chernobyl/Pripyat level of the modification), untextured gas canisters, an updated concrete barrier, updated metal barrels, and lastly three vehicles, the Lada Samara, Moskvitch and ZIL 131. The first two are intended for the Chernobyl/Pripyat level, and the last as a general vehicle through the modification.

Concrete Barrier
The texture for our generic concrete barrier prop has been re-done to a higher standard by team member Quillisia, and the screenshots showing the latest texture for it can be found below.

Moskvitch Vehicle
The streets of the Chernobyl/Pripyat level need to be filled, and some new Russian-themed vehicle props will be a perfect filler for level. Team member glenatron has modelled and textured the first vehicle, which is of a "Moskvitch". It currently only has one colour, however, more colour variations will be created when the "Lady Samara" that is shown below, is completed. The below screenshots showcase the completed vehicle ingame.

Lada Samara Vehicle
This is the second Russian-themed vehicle for the Chernobyl/Pripyat level, which is again being undertaken (Both model, and texture) by team member glenatron. The model currently stands completed, with the texture still being quite work in progress. The below render was taken in a 3rd-party program. 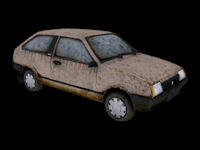 Barrels
After a recent decision that the generic barrel props for the modification lacked wear-and-tear, team member AciD_013 undertook the task of dirtying the barrels. His current progress on the updated textures is shown below. Also currently in development is the texturing of a lid for the barrel, which will then be used to create barrels with lids, with the current ones only being lidless.

ZIL 131 Vehicle
Currently being worked upon by team member Quillisia, this is a Russian truck for the modification. It was originally planned just for the Chernobyl/Pripyat level, but it will generally usable as a generic truck for each and every level of the modification. This truck is planned to be drivable, and not just a simple static prop. The following screenshots of it were taken from the viewport in Maya, and show the partially completed low-poly model, currently unoptimised.

Gas Canisters
With gas canisters being well-known explosive props in the gaming world, we decided to create two types of gas canisters for Crysis, which are shown in the two renders below. The models were created by team member aku123, and are currently untextured.

WIP - Particle Effects
Next up, we have some particle effects that team member and talented particle creator The Punisher (Alternatively known as Erazer), has created for us. In order to offer a largely new experience, both in regards to graphical elements and gameplay, we decided that several dozen of the existing particle effects would have to be replaced with new ones. Today, we have several explosion particle effects to present to you.

Explosion Particles
The below video shows several of the replacement explosion particle effects that The Punisher has created, greatly contributing to the new feel that we are aiming for with the modification.

WIP - Levels
Now for the last content section of our update, which consists of updates on the following levels: the Ice level, and the Chernobyl/Pripyat level. It currently consists mainly of a summary update, summarising some previously released media in the Crymod threads for the levels.

Chernobyl/Pripyat Level
The first two screenshots that are below display a junk-yard type section of the level that team member TerrorBlast has been working upon, which is made out of some standard props, as well as a spattering of custom props that we have developed. The scene is shown during both the day and night. The third and last screenshot is a render of a work in progress apartment building that TerrorBlast has also been working upon.

Ice Level
The Ice level, currently in development by team member Nano., will feature several icy valleys converging on an ammunitions and weapons shop, to where the player may return to between missions. Images #1 and #4 show a crashed plane side-mission where the player will be able to attain information on the primary assassination, as well as ammunition. Image #2 shows a currently work in progress shot of one entrance to the weapon shop. Image #3 shows a side route off the main valley.

Status Update/Recruitment Positions
Progress on the modification has admittedly been slowed down by a fair amount in recent times, due to many varied issues for the team members. We are still working hard on the modification, but we are urgently in need of some fresh team members to renew our progress on the mod, and to progress even further. The following positions are open within the team, although I am currently slightly inactive and thus replies to any applications will be slightly delayed. To apply, you can either PM myself on Crymod, send me an e-mail to me at at callofduty611@hotmail.com, or use the application form on our new website, which can be found here. Further information on our website can be found above.

Thank you for taking your time to look at our update, we hope you enjoyed it.

very very nice stuff. i love the explosives strapped to the bottom of the water tower. marine is nice looking but as u said, could do with a tad bit of texture work. The probs are of good quality too. great work guys keep it up.

Don't know how that error slipped through, thanks for the correction! :)

everything is looking very awesome!!

Your ice level looks fantastic but the pripyat junk piles look lke a close up of toys for some reason. You may need a higher resolution ground texture...I have no experience with this engine or video game so take my comments with a grain of salt.

You should add somebody to write updates to the job listings because the writing here is awful. Go ahead and write like you would talk instead of just adding in "upon" "attain" and "thus". You look like a fool who is trying to act "professional". Also,"Welcome to another update from Anarchy Productions, in regards to the modification entitled as the Assassination Mod, which is currently in development by us." is probably the worst sentence I have ever read.

I'm sorry you feel that way, but that's just the way I write unfortunately, I'm not intentionally trying to act "professional". I realise that the first sentence wasn't written very well and I didn't spend much time writing it, but hey, it gets the point across and I didn't expect anyone to go so far as to criticising the way our updates were written. Incidentally, I didn't write the paragraph where "attain" was used.

The main city area of Pripyat is undergoing a complete makeover, but you can check out some of our previous updates, where more recognisable areas of Pripyat have been created. :)

Awesome video! Keep it up! You got my watch on the mod :D.