Hey guys! As you may know, our Kickstarter campaign is coming to the end but tonight is a great night because WE DID IT! We reached the initial goal! It is partially due to our plans for implementing choices and consequences system in the game, which we describe in this article.

As you may know, our Kickstarter campaign is coming to the end but tonight is a great night because WE DID IT! We reached the initial goal!

All the hard work and sleepless nights have finally paid off. Many thanks to you, our dear fellow developers who backed us, for your support, help and faith in our project.

But the campaign isn't over yet, so we'll continue to work and hope that in the last few hours many more people will come to us. We will be very grateful if you could tell your friends and colleagues that together we have collected the necessary amount. The easiest way to do this is via our social networks:

We really hope that we will be able to reach some additional goals. It is within our grasp.

Also I'd like to remind you that we have a special offer for the last hours, the one we wrote about in the previous update, but to make it come true it is necessary to achieve an additional goal of $80,000.

As a token of our gratitude to the community, if we reach this goal we'll mention everybody on the $35 tier in the titles, and whoever chooses the $75 tier will be featured in the game world — we'll use your photograph to create a portrait of an in-game character for one of the secondary quests (there are only so many we can do, so it's first come first served based). If you're late to it or not interested in that you'll receive a chest of strixes — that's the currency that will be used in the multiplayer version. You'll be able to use the strixes to acquire cards and units that you can use in your battles against other players. 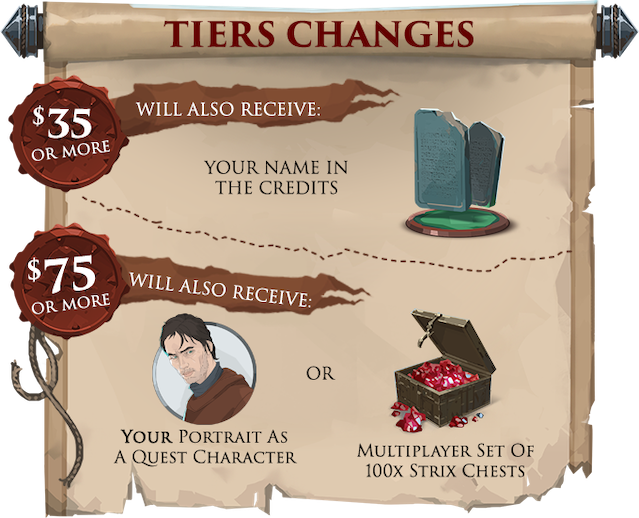 But besides of sharing the joy of success I also would like to share with you our vision of how choises and its consequences should work in Ash of Gods. I hope you will enjoy this reading.

It's an incredibly laborious process to implement stuff like this in a game — and especially in an RPG. And it's not just a matter of creating the right conditions for you to exercise your choices, or of deciding what those choices are. You also have to calculate all the possible future consequences of whatever choice the player decides on, which includes all the repercussions for the main character, the other members of his team, and the entire game world.

A good example is the plot of The Lord of the Rings. The death of Gandalf the Grey in the mines of Moria triggers a whole chain of events: Every member of the Fellowship of the Ring is grief-struck and distressed by the Wizard's death. Boromir loses all hope and even tries to take the Ring from Frodo, compelling the hobbit to travel to Mordor on his own. Next, Boromir perishes in a battle with a group of Orcs. If Gandalf hadn't died, would Boromir have been so desperate, and would he have dared to try and take the Ring for himself? Would he have survived the fight with the Orcs if the Wizard had been fighting by his side? Would Frodo have abandoned the Fellowship if Boromir hadn't taken leave of his senses?

But books aren't interactive. The non-linear nature of game narratives implies that various decisions can be taken, and each of them will cause the plot to develop in a different way. There are also other factors that can complicate the consequences of a player's decisions: things like whether specific characters live or die, their behavior and the morale of the team. In other words, a whole chain of events is triggered, each of which must satisfy the logic and laws of the game.

We're doing our best to ensure that every choice will have consequences in Ash of Gods. To avoid any misunderstandings, I just need to get one thing straight. Everything I've been saying so far applies primarily to the decisions you make in specific situations, not in every reply you choose during the dialogs, although your dialog decisions can also have a major influence on the plot direction.

We wanted to make sure that the choices you make aren't just flavor choices, but we also didn't want to create a "pick your adventure" type of game. Our goal is to tell you a great story, but also to give you a chance to influence and shape it with your own decisions.

In our game, you shouldn't make choices lightly, as they are affected by several important factors. So, what are these factors?

The game remembers your decisions and they affect the way things pan out. What's more, the true consequences of a decision may play out over different time periods and the logic of the repercussions won't always be transparent to the player.

How does this work? Suppose you act suspiciously or rudely in a dialog with a guard and this leads to a fight. In this case, the chain of events is simple and easy to understand from a logical point of view. The game's reaction to your choice is instantaneous.

But, let's look at a more complicated scenario: You've just met a couple of fishy-looking people who might actually be bandits but claim they're ordinary laborers. You don't believe them and end up killing one of them. The others flee, and for as far as they run, everybody hears about your horrible deed.

And then there are some really complicated storylines, where a decision you take at an early stage of the game might seem insignificant to you, but eventually leads to very serious consequences at the end. This can be due to several reasons, such as the presence of unknown factors (for instance, the beautiful weapon you found turns out to be cursed), or because the player's decision has set off a whole chain of events. Perhaps the weapon you picked up belonged to a murdered king: now you stand accused of murder, you're excommunicated for regicide and such a large bounty has been placed on your head that it drives even the ordinary peasants nuts, while a whole squad has been dispatched to hunt you down.

And it isn't just a single decision that might trigger such a chain of events. Sometimes a confluence of different decisions may be at play: in such a scenario, each separate decision will be generating a host of consequences that are unknown to the player and will lead to a specific result in the future. It's impossible to foresee these events, and this boosts the replayability of the game a whole lot.

You won't just be making choices in specific situations. You'll also have to take decisions about your travels across the map of the world. These journey choices make up an important part of Ash of Gods. Where to go, which route to pick — we want the player to think carefully about his choices based on his available resources and the possible risks. 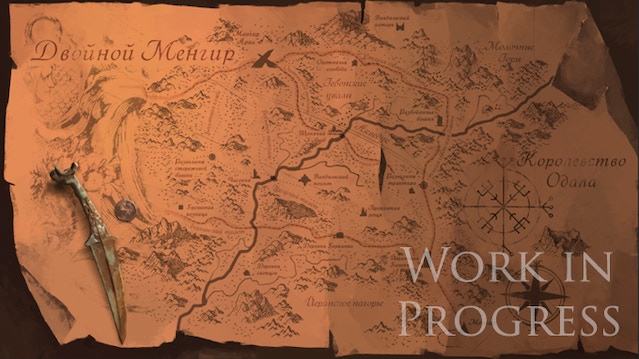 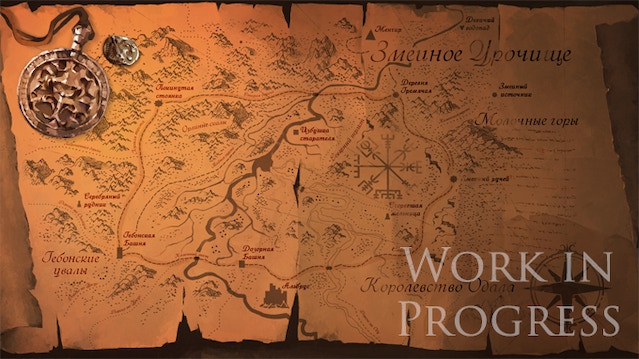 Every time you change position you use up strixes — these are sacred menhir fragments which people use to resist the plague caused by the harvest. If you use up all your strixes, your squad will quickly start to decrease in number, perhaps because you will have to sacrifice some of your team members by giving their protective stones to those members of the team whose lives you want to save the most.

A single goal awaits you at the end of a trip, but there will always be diverse ways of reaching that goal. You could choose a shortcut, but rumor has it you'll run into a large detachment of Enses, and several of your team members may meet their demise in battle if you go that way. Or perhaps you could pick a safe route through the mountains, but this will take much longer and use up a lot more of your strixes. There are also a couple of special factors that could affect your choice: for example, to catch up with one of your characters, you may have to take a serious detour.

Along the way, your band of heroes will regularly get embroiled in different events that are specific to your chosen route. These events in turn have different solutions as well as different consequences. So suppose you run into a gang of insolent Gellian robbers. They give you a choice: fight or pay them off with gold or strixes. You can try to scare them off and bluff your way out of a fight. You could actually fight them, but then you run the risk of losing some of your team members. You could also pay off the Gellians by giving them what they want, although your companions will probably take you for a coward.

Luck also plays a significant role in the game and is to a large extent determined by its difficulty. You could pass uneventfully through a dangerous stretch of the journey, you could find some strixes on the bodies of the robbers you just killed, or you could buy some strixes because of a lucky encounter with a merchant on the road. Sometimes the straightest route may turn out to be the longest, perhaps because of a ruined bridge. The higher the difficulty level, the more often luck will be against you, so don't be surprised if you pick up a purse and it contains not just gold, but a snake as well. Or perhaps a landslide on a supposedly safe mountain pass will kill some of your companions.

INTERACTION BETWEEN THE PROTAGONISTS

It's worth mentioning a couple of things about the interaction between the main heroes and the extent to which their decisions influence each other. Sometimes the decisions you make in one storyline will have repercussions for other characters’ storylines. 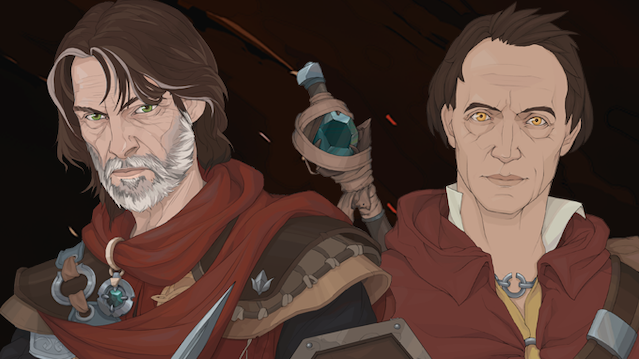 For a part of the story Blance follows in Thorn's tracks, trying to catch up with him. He will experience certain consequences as a result of his choices. The decisions taken by the player in events and dialogs on behalf of Thorn help to shape Blance's opinion about Thorn. That opinion, and its consequences, will depend on your decisions.

That's the way we see choices and their consequences in Ash of Gods. If you have any interesting suggestions on how to make the game better, share them with us in the comments. And don't forget — make your decisions wisely! Who knows, the fate of an entire world may depend on one of them.