Just to switch things up a bit from the alien reveals, we wanted to show off some more of the revamped marine structures in the game. First up is the new look and design for the Armory. 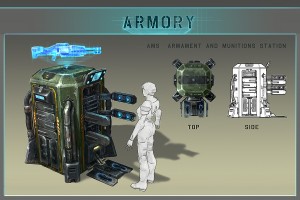 In NS2 this structure will allow the marines to purchase weapons and equipment. Like the NS1 model, we wanted to make sure that it was approachable from all sides, to allow as many players as possible to access it at the same time. It's an important structure, so we also wanted to insure that it's easily noticeable by first time players. Hence it's increased size, and the addition of a rotating holographic gun projecting from the top.

We also went with a more interactive design, so, as a marine approaches the structure, the side closest to them unfolds and opens up, welcoming them in. The arms scan the marine, running diagnostics, assessing and repairing armor damage and injuries, while the marine links in via their helmet HUD. When no one is near the structure, it remains nicely folded up, protecting it's delicate machinery and electronics, and taking up less of a footprint in the environment.

When an item is purchased the arms essentially become 3d printers. The requested item has been scanned offsite, and downloaded into the structure, and then it is printed instantly into the marine's waiting hands as soon as it is purchased.

Here are some in engine renders: 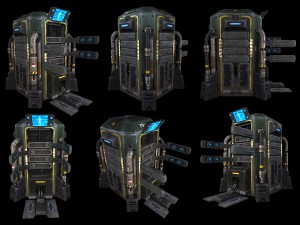 Here's short video showing the armory deploying, opening up to be accessed, and then playing a scan/printing animation.


Hope you enjoyed this first look at the new marine armory structure!
Comment on this.

Awesome look, although it's a big change to the NS 1 version.

Wow! The art direction and content itself is looking more amazing with each update. Much respect.

Holy **** *** O_O.
I mean seriously LMFAO. This game looks better and better! I'm proud of you guys, I can't wait to play this game. Keep up the great work!

the release date is so close. i have to ask, why is there not yet any gameplay footage?

The concept art looks totally awesome,especially the holographic projection of the gun.