Incoming Transmission, FLEETCOM.MO.BL.AM >> CAWCOM
.:BEGIN:.
Merry Christmas everyone, welcome to the Apex Studios Christmas Update, packed with new units and christmas cheer.
First up is a unit that's been greatly debated, the UNSC Destroyer. The Destroyer was described in the books as more or less being a larger frigate, but when it made it's first canon appearance it looked quite different, and so to remain mostly canon, I present to you the UNSC Genesis Destroyer, the last image is our old Destroyer, for reference: 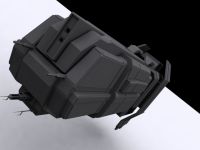 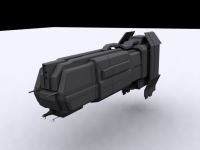 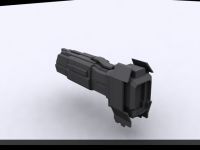 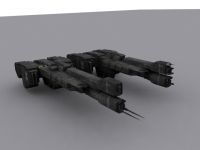 Our old UNSC Destroyer and UNSC Heavy Destroyer models will remain in the mod to serve as UNSC Heavy FFGs and UNSC Light Destroyers respectively.

But wait, there's more, I give you our Covenant Destroyer, smoothed, remodelled and extended: 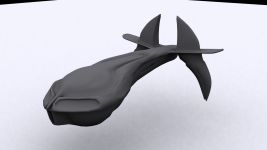 We also have a nice new banner, as seen at the top of this page, a welcome change from the old one I'm sure you'll agree.

One last thing before I go, just me that is, Anh has alot to show you, I thought you might like to inspect the fleet, below is an image of all our modelled ships that we are ready to show, a scale chart if you will: 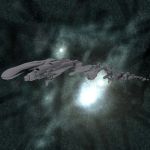 Good night everyone and I wish you all a Merry Christmas and a Happy New Year.
.:END:.

Hello everybody and welcome back to the Christmas Weekly Update,
I have so much stuff to show, but first a big "Merry Christmas" to you all! This week with a big announcement, and less important things, but still important things first.
Ok, think got too much stuff. Forgot what I got… Damn it! Ok, I think I got the Forerunner Warship skinned… ok, not final yet, but it’s something…

Noticed the awful UVs first when the skin was finished… I wanted to make some black lines and half of them got displaced… Ok, I wasn’t really finished, half of the details and bumps missing…

Can’t get more awesome you think, right? What if I tell you you were false?
HA! PWNED!
It can really get MUCH MORE awesome!

Actually it’s just the image before with a background, but turned out into that. Much more awesome than the first image.
Colorized variant (just looks cool):

This series was once a candidate for our new header… But was too big and too boring for use as an banner… Too less colors and not representing halo enough… at least not our style… or my one… And who needs a monotonous pic as an header?

Ok, up to the next part. New stuff. Completely new. Drumroll please…
The Covenant Corvette 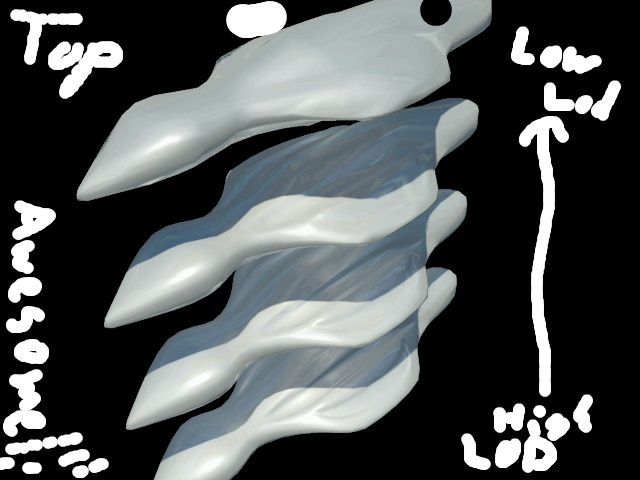 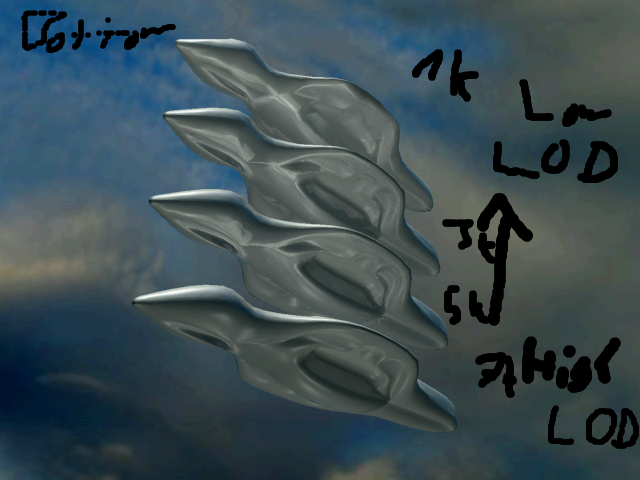 Completely new design, discovered it “by accident”. Never thought that my fantasy could yield something such creative like that. Yes, with LODs for full unneeded fidelity! Oh, and I like my materials…
The boss doesn’t like the front, too pointy he says. So I ask you what front you want:
• A pointy one like this
• Or a bulky one like the one from a CCS or Assault Carrier?
We want YOU to answer! Please do so in the comments or in our forums, but NOT personally like PMs or E-Mails. An answer important, it could change the way the mod has to be played (serious)…

Man, iTunes lets music sound so awesome! Listening to “Rock Anthem For Saving The World” atm you know… again… I like how Marty makes music… ODST score was more worth than just one single VGA… Was too awesome for that… May Reach also get one! Marty ROCKS!!! Frank Klepacki too!!!

But to be serious: Did you notice that the Mod of the year award has started?
If not: VOTE FOR US!!! You won’t regret it… Oh, and you also should do it even if you noticed it… Just to go sure that you voted for us xD
Notice: Please be logged in when you’re voting, otherwise your beautiful vote will count first on a tie, and that occasion is rare…

I also got some concept arts :D
One of them already turned into a real scene… No, sorry. I mean WIP. It just looks crappy yet.
In memories to the fallen…
Concept: 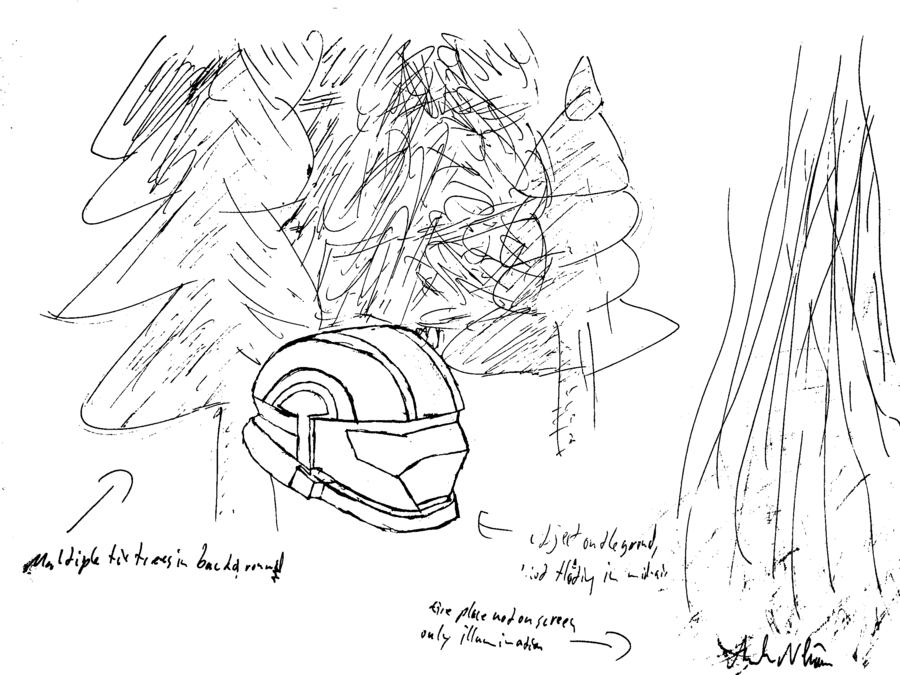 Vue has crappy standard trees, maybe I should consider buying some professional ones from Cornucopia3D…
Should represent the helmet of a dead ODST, inspired by a special movie called “We are ODST”. The helmet model is untextured yet, made the colors by materials (first intended to use translucent one for visor, but then abandoned it because of lack of time and replaced it by a backlighted one)

The other concept doesn’t has a name yet because it’s still a WIP: 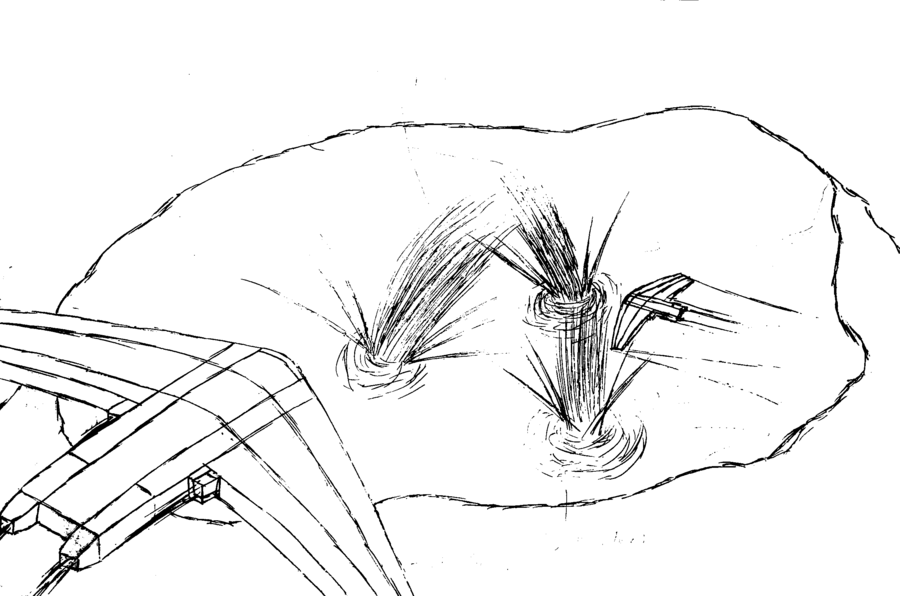 Awesome, right? Yes, you gonna see real explosions in there;)
And also massive Marine Action! Maybe also some ODSTs dropping in…
Oh, and there’s the relation to a render two updates or so before. I mean the mountain, where no relation was. But now is.

Now to the most important part of the update: A really important announcement!
Yes, now I’m gonna announce a release. Release of a website. A website you never have seen before. But you will see it now!
Click that link! That’s an order, soldier!
Hcaw.unitedstudios.co.uk
Sadly none of the community-wanted features yet… But will soon. But I like the design. Easy, but dark, high-contrasted and random backgrounds(!!!) consisting of our masterpieces, our renders. Of course they will fit into the dark style.
But enough said, now some facts! Next to the backgrounds you will also find a full units list, as well as some of the heroes (classified yet, sorry guys). Among them a description of us can be found there (only I has written one yet…) and have the ability to contact us. Also several links will be provided, referring to here and another place, as well as some friends… Man, I’m bad at PR! Forget it and just CLICK!!!

I think I got everything…

Questions from the community:
• “will there be heroes?” – a simple yes
• “if yes, what for heroes?” – covie-pwning action heroes
• “when does it come out?” – ask that again!
• -‘‘- - fuck you you sucking dumbass!
• “do I have to vote for you?” – if you want, yes. If not, I’ll make sure you’ll vote for us
• “what software do you use?” – for us all: Autodesk 3dsmax 8-2010, e-on Vue 7 xStream-8 xStream PLE, Adobe Photoshop CS3-CS4, Adobe Dreamweaver CS4, Adobe Fireworks CS3, Apophysis 2.02-2.09 including 2.06 and 2.08 3D hacks, Google Chrome (latest versions), Apple Safari (latest version if it upgrades automatically), Mozilla Firefox (3.X, 3.5.X), Microsoft Internet Explorer 7-8, xFire (latest version), Apple iTunes (latest version, no I don’t have an IPod or something like that, but others have), TweetDeck (latest version, was 0.32.5 as I know), Microsoft Word (2007), Calculator (Vista), Microsoft Windows Vista (Windows 6 Build 6002), Microsoft Windows Seven (Windows Seven Build 7000), Microsoft Xbox 360 (latest Kernel), Microsoft Xbox Live (latest version), Microsoft Paint (Vista), FlashFXP (I think I got 3.5.7), Internet Information Services 7.0, Adobe After Effects CS4, Adobe Premiere Pro CS4, Adobe Soundbooth CS4, Adobe Flash CS4, Adobe Illustrator CS4, Adobe Bridge CS4, Dropbox, TortoiseSVN (some version one or two months ago), VisualSVN (not sure which one), Pixologic ZBrush (v3.1 or so), Stardock ObjectDock (does it has any version), Last.fm Scrobbler (dunno why I have it), Microsoft Windows Media Player 10-think it’s already 12, VLC Player (any will work), Microsoft Windows Photo Gallery, Ahead Nero PhotoSnap Viewer 8, Ahead Nero Burning ROM 8, TuneUp Utilities 2009 demo and of course mass of porns, drugs and alcohol! Sure you need all that crap?
• “do I have to read it?” – would be appreciated. To know that our community is eager enough to read all that… awesome!
• “is the flood playable?” – a sucking yes
• “how does it infect?” – we got a theoretical solution, but I cant tell you nerds
• “have you seen the new reach trailer?” - sleep.gif
• “what do you think of it?” – imo looks much more realistic now… not that star trek sci-fi anymore… others may have other opinions
• “how do you make this and that?” – First a triple-combo-punch in your face and then a big huge ass-kick. Serious, do you even know google?
• “can you make another demo?” – an absolutely fucking no! there won’t be another demo until we tell you so!

Advertisement for me and some sites I’m on xD.

And because everything has a end, also this update has to end.
THE END

Merry Christmas and a happy new year!
From the guy sitting next to you…
Anh Nhan

P.S.: This blog is awesome! Nothingforungood.com Sadly I can’t confirm all that yet because I don’t live in Schwaben… I live in Bavaria, where the holy Wiesn is (FTW!!!)

You're very welcome! xD
Forgot to tell Blam that there's a placeholder. Sorry.
And there's also a image i forgot to convert... The url in brackets
shortly before the placeholder
and also forgot to add several links...

I love it. You have my many thanks. I greatly appreciate your's and the rest of the development team's hard work.