Lunar Descent will be a single-player mod that places strong emphasis on exploration, environment design, story-telling and brutal combat.

The mod is set on the Lunar Colony, which is run by the mega corporate entity called Xterrier. All seems well Xterrier citizens until a fierce group of bandits strike out in syncronised attacks across the colony. The player will take control of Victor Redmond, head of security, as he attempts to prevent the colony from succumbing to anarchy.

The mod will be released episodically, with the first part focussing on the attack on lunar society and Redmond's attempts to stabilise Xterrier's weakening grip on security. However, behind the terrorist plot lies mysterious agent at work, which will ultimately threaten humantiy itself.

Below you can find some work in progress screenshots of the mod. More information will precede the release, which is currently being targetted for Q1 2015. Follow our development on ModDB, Twitter and our development blog – we will keep all up-to-date with the latest happenings. 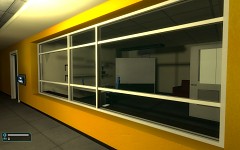 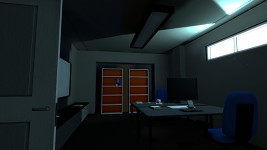 Thanks! We will have more to show in the coming months -- we're predominately focussed on gameplay at the moment, so polished screenshots are kind of limited at the moment. :)