Let's celebrate one year of 3x64 on Steam and itch.io with ingame quests, gamepad support, new menu and much more!

This month it will be a year since the release of the first version of 3x64. A lot has happened since then and the game has gone through two major updates and two successful events (one of which was a community event). We also gained a lot of experience with our first game on Steam and itch.io, and now it's time to introduce another major update so you can celebrate with us!

The anniversary update mainly focuses on two things - new gameplay features (ingame quests) and improvements to the technical side of the game, including the most requested features like support for gamepads, cloud profiles and UI improvements.

But there is a lot of news, so let's go through them one by one:

The ingame quests present a new challenge for both new, and returning players who already know the game mechanics well. During the game you can complete these quests by using powerups, collecting points, destroying threat blocks and more. For players who like real challenges, we have prepared unique daily quests for extra points!

This feature also comes with ranks, where each player can progress and gain higher ranks by completing quests. Your current rank is visible in the new leaderboard menu, so make sure it stands out above other players :).

With the implementation of the new input system we bring the long-promised support for various input devices! 3x64 is now fully compatible with all common gamepads and game devices. Better defining of custom keys is also included through the new controls menu.

The game menu has been completely redesigned. Now it comes with cleaner and faster theme and better categories. Explore the new graphics settings, rewards manager or improved leaderboards! 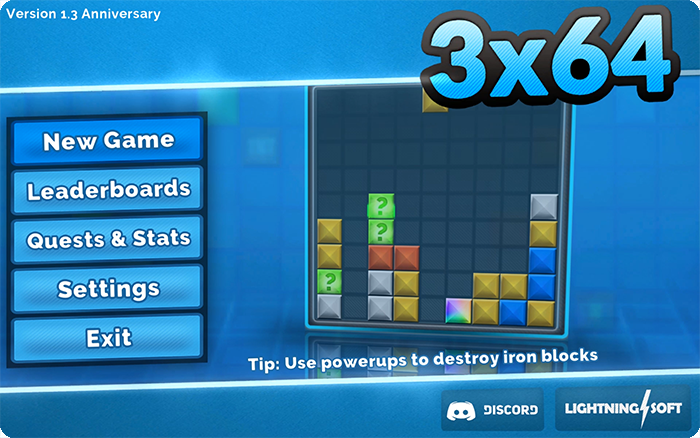 You no longer have to worry about your game data when switching between computers - your current rank, quests and statistics are safely stored in the cloud (only on the Steam version).

Many tweaks and fixes

We also found time to fix and improve a lot of bugs and features that have appeared throughout whole year since the release. Many UI elements are now higher quality to better support high resolutions. Also some particle effects were added or tweaked in accordance with the upcoming mobile version, and some serious bugs were fixed. You can see the complete changelog below the article :).

I hope you will enjoy all the new content we prepared! After one year of active development I'm finally satisfied with technical side of the game. This update was very important for the long-term support of the game, and I hope there will now be more time for another milestone that many of you are waiting for - mobile version of 3x64 :). It still needs some more time before the first beta version, but in the meantime, you certainly don't have to be bored in the PC version - we are preparing new content very soon, which you will definitely notice after a closer examination of the menu - and that's not the only thing you can look forward to :).

We will look forward to your ranks in the leaderboards and we'll be happy if you decide to share your feedback of the new update either here or on our Discord server! You can get the game on Steam or itch.io for 3,64€ :).