In 3x64 you can get many types of powerups. You have 3 slots for basic powerups - these can be easily earned by destroying active color blocks. Then you can use them whenever you want, or you can wait and craft much more powerful ones - the choice is yours!

Altogether there are 16 powerups in the game, including those that manipulate blocks, time, and strategic minigames such as arkanoid and shooting.

Apart from the basic color blocks, two additional types of blocks will make your game more challenging. Iron blocks spawn every so often, and can be destroyed only using powerups. Threat blocks hide a random negative effect - but you have some time to destroy them before they activate.

After the game ends, you can share how well you control gravity with other players in online leaderboards. Your current position in the leaderboards is always displayed during the game.

You can easily pick the game up on your own, but the game contains an interactive tutorial which can make your start even easier.

In the last post on the occasion of the release of the game for Android, I also promised an update for the PC version which aims to add all the latest missing features that the game should contain.

Now two years after the game's release, it's time to publish the fourth, and final major update for the game! We have prepared a new game mode, a new language, a recipe book for powerups and a changed music system! Also the update contains many fixes and tweaks.

A new game mode that takes full advantage of the game's gravity mechanics and teaches you to master planning in 4 gravities even better than before. Gravity mode has been my wish since the release, but the implementation has only now taken place so I hope you will enjoy it - don't forget to share the results of your planning skills in a new leaderboard! 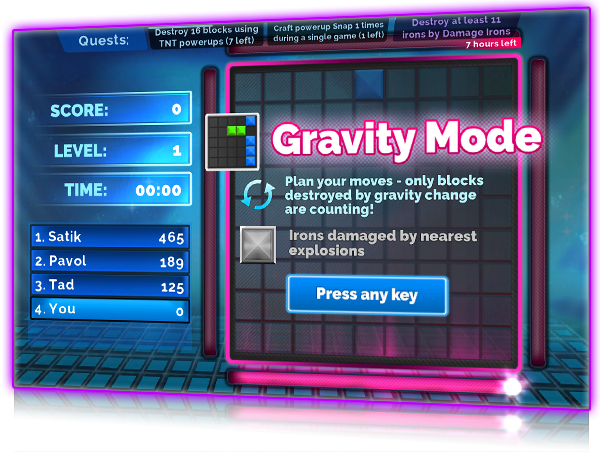 The list of craftable powerups was very requested wish and I agree it's a feature that should be part of the game. So now you can find all recipes of already crafted powerups next to the statistics which can serve you perfectly to refresh the necessary combinations to achieve them! 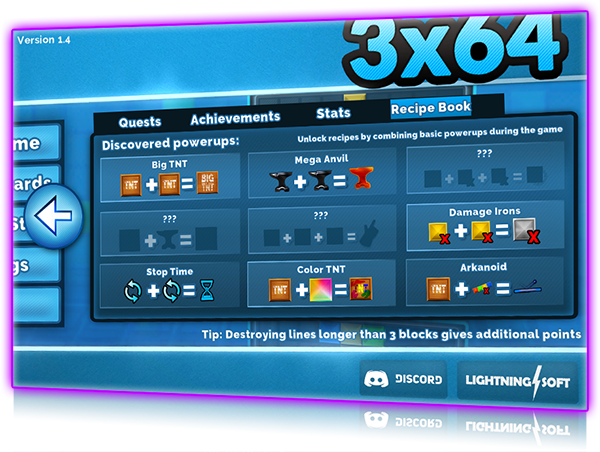 With the help from our great translator Andrej "Viking" Tichonov, we added complete Russian translation for our Russian fans!

The update includes many fixes and tweaks and also brings support for the Dualsense gamepad. See all changes below :)

I hope you will enjoy the new update - for the last two days, the game is still participating in the CZSK Games Week so if you haven't bought 3x64 yet, you can get it now with new gravity mode with 75% discount on both Steam and itch! I will look forward to your results in the new leaderboard :)

Let's celebrate one year of 3x64 on Steam and itch.io with ingame quests, gamepad support, new menu and much more!

Conclusion of the Destroy Threats Together event

Too many threats in these times? Let's unite and destroy them all together, at least those in 3x64!

Gameplay trailer - Explore the game with gravity changes and many of mighty powerups!