A look at how Cogmind's title screen was put together.

[This post was formatted for the regular devblog, so the images don't come out quit right here. See the original for better formatting.]

The design philosophy behind Cogmind emphasizes maximum immersion wherever possible. For this reason I'd like to avoid game-y interface elements--those which are not part of the game world itself but instead remove your mind from that world and remind you that it's a game. (A fact you're obviously unlikely to forget, but anything that breaks the illusion is still bad.)

As discussed earlier, we tucked the options and game menus away with the help and manual interface using the same animated style as the rest of the game to make the transition to "non-game-world space" a little less jarring. An options menu accessible from anywhere, plus mandatory permadeath (and no save menu--games aren't so long you might play multiple runs in parallel), mean we could almost do away with the title screen entirely.

I like how the the 7DRL has no title screen--immediately on opening the game you are dumped right into the action regardless of whether starting a new game or continuing an old one. So for a long while I've been operating under the assumption that the game may not even have a title screen, doing away with an unnecessary "gateway" into the game itself.

More recently I've reconsidered that direction, since even without any interactive functionality (we've now removed or relocated everything that would apply), a title screen does have other advantages. One of the most important is name recognition in various places the game may appear, e.g. screenshots, and more importantly YouTube LPs.

Plus it's an opportunity to have a cool-looking title logo.

And that's actually where the change in direction originated from. It started with a Twitter follower pointing out that the official Cogmind logo as seen on the new website doesn't reflect the art style of the game. It "needs the ASCII treatment."

Thus I began sketching an alternative design in REXPaint for whatever purpose: 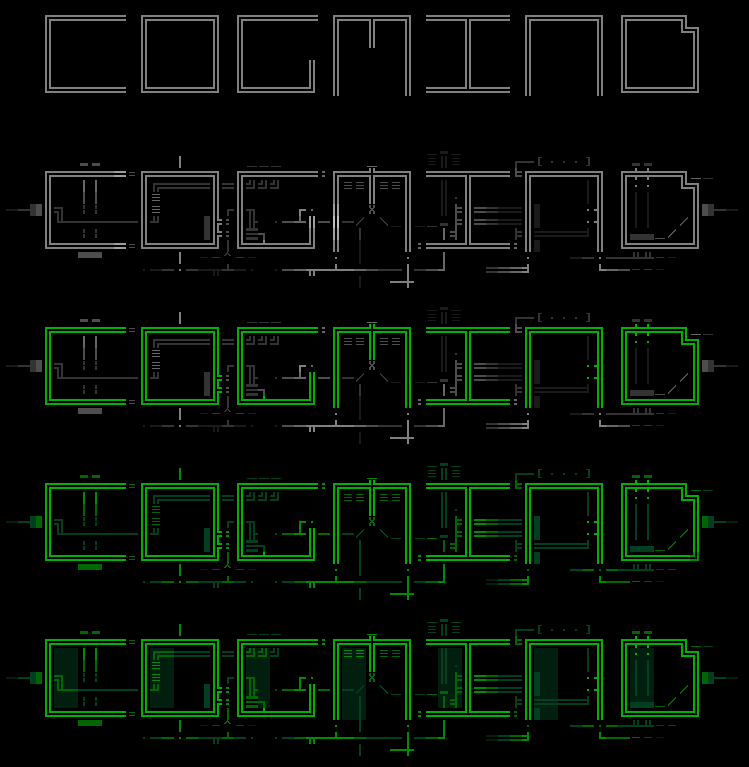 First concept sketch evolution for an ASCII-fied Cogmind title logo. (Click for full size, as with all other images in this post.)

As it started to look promising, I imagined how fun it would be to animate it and put it in the game. So of course I had to try :)

Flow-wise we already had an intro that plays when starting a new game, so the title was inserted before that and leads directly into it--the two work pretty well together since they share the same animated ASCII style. Both the title and intro are skipped completely if continuing a previous game.

When the title is shown, the goal is to minimize its "intrusive nature" and make it look like it belongs in the game world. This isn't too hard since everything uses the same ASCII animation engine, and in terms of composition you'll notice the title also uses the same style of line art used for items. (I still have yet to do a dedicated post showing off the different types of art in their final form, but some examples were previously shown here.)

I already liked the concepts, though the last iteration seemed a bit overdone, so I aimed to use something like the second to last one. First I redid some of the ASCII "circuitry" to rebalance the overall shape and flow of the title.

Minimalist is good, but I didn't think this would be enough substance for a fully animated title which could really use at least a tiny bit of buildup. What better than even more circuitry! So I drew a third layer under both of those:

Stacking three art layers. (The bottom layer is drawn in a single flat gray--no shading--because the shading will be applied during animation as necessary.)

This bottom layer should look good both by itself and when combined with either or both of the layers above it. This meant a lot of layer toggling during the editing process. The bottom layer is only used fleetingly, though, (and is not a part of the final appearance) so the attention to this kind of detail is mostly overkill.

The animation part was pretty easy, only requiring a handful of scripts. For the curious:

The second half of the above scripts are used to animate the title itself; the first half actually animates the "Grid Sage Games presents" text which appears before it. (Yes, might as well put that in there since we have a title now.)

The bottom-most layer, and first to animate, is seeded with 20 randomly located emitters from which the ASCII lines are traced in gray along cardinal paths (i.e. no diagonal drawing). Half a second later 20 more emitters are created on the middle layer, which is traced in green (this one allows diagonal paths as well, to ensure quicker complete coverage). Another second layer the title flashes in with a special glitch effect, while at the same time the bottom layer flashes in its entirety for a moment before quickly fading out. See it below:

That's it, three layers of ASCII art imported from a REXPaint .xp file. Notice one key difference between the result of the animation and the art itself: The "COGMIND" lines are brighter and have a background color to them. Turns out that when I borrowed an existing script to draw that part of the title, its design happens to leave the background color behind. I liked the fact that it stands out more and also melds the letters with the background circuitry via the few half-cell blocks scattered around the edges. So I kept it that way.

A static shot of the final title appearance, in game.

There you have it, Cogmind's new "title screen." Conceptually it's still an out-of-game element, but at least it doesn't require interaction--the game automatically starts about two seconds after the animation is complete.

What about the music...this kind of game deserves some epic cyber synth tunes in the likes of Megadrive :) Have you already talked about the music in the game I don't think I've seen anything mentioned so far?

I haven't mentioned music yet, yeah. I have talked about sound in various capacities, and almost the entire game is filled with sfx--title animation included.

I'm just not recording any videos so you haven't heard much of the game yet. Last year I did record some of the in-game sounds separately--if you're curious check them out here: Soundcloud.com
The first real video will be the alpha launch trailer.

I wasn't thinking along the lines of cybersynth retro futuristic, but you've given me something else to consider. That might be too high-energy for a turn-based game, yeah? Maybe more suitable for just a trailer and/or the endings. But rather than stick to a clearly established genre I'm thinking of going with more unique and experimental game music. Definitely a good bit of electronic, but maybe not completely. Either way, most of the game will lend itself to ambient background-ish music. Maybe even pure environmental ambient is most appropriate...

I'll wait until the alpha is out before making a final decision on music (then others can weigh in after having actually played the game), though we'll need some at least for the trailer before then.

oooh I like the pre-alpha intro start-up! It's kind of funny to listen to these sounds without the game :)

Very weird, I agree :D. I just didn't want to show the entire thing yet (especially way back then), or record any video. I believe I'll be including part of the start-up in the trailer.

btw I don't know if you follow it but there is a bit of a mention of cogmind on the latest episode of roguelike radio Roguelikeradio.com

Thanks for the notice. I did see that earlier today (I follow and am active in many popular roguelike communities), though I hadn't gotten to listen to the entire thing yet--only about 10 min of it. Maybe tomorrow!

Thanks, lots more where that came from! Right now I'm adding animated ASCII to certain interludes, and this week I made a placeholder full-screen ending animation. Too bad I can't show it because it blows my mind, and I made it--you'll just have to beat the game ;) (or beat the alpha, because the beta will have an even better ending!)

This is some seriously cool stuff! :)

Thank you--while the art is static, it's actually animated randomly, so the appearance is somewhat different each time you see it :D

It's mindblowing! The website is also sweet and ties in brilliantly with the Cogmind style. Keep up the great work!

Just today I was brainstorming the first alpha video, which will most likely be 100% in-engine animation. Should be interesting ;).