They say Qim Jahl was mad. Deranged. A lunatic who brought shame to the Empire. But who is more to blame – the madman, or the fools who set him loose?

In truth, Qim Jahl, son of Domas, was one of our greatest researchers, personally commissioned by the High Council to develop the most potent weapons in the Empire. Brilliant, even by the standards of the Federation, but twisted. A warrior knows battle, but Qim Jahl had…an appreciation…for annihilation. It takes an unsettled mind such as his to truly understand devastation. In the Empire’s name, Qim Jahl built weapons that would set even the darkest pits of Gre’thor ablaze. 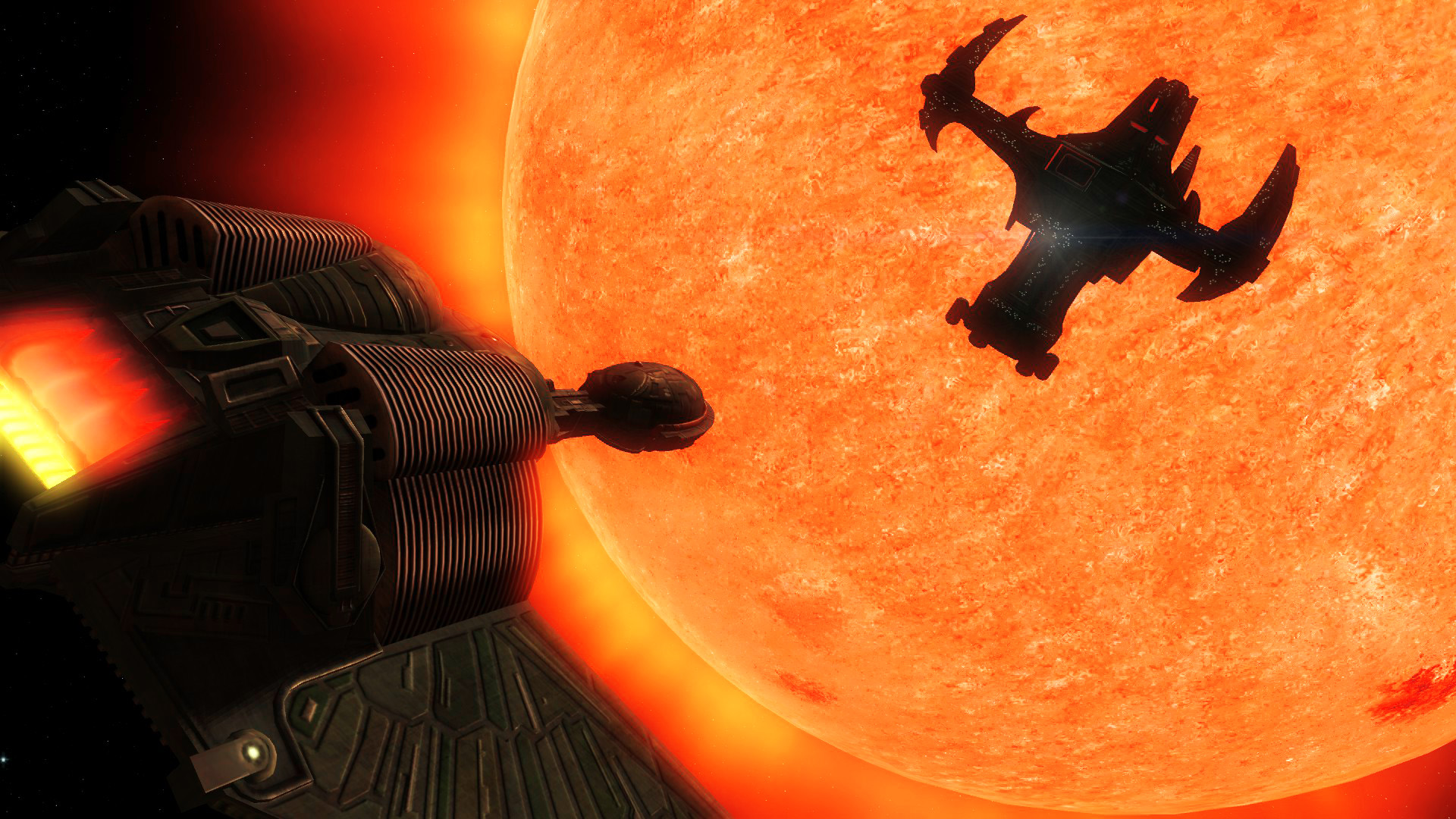 So it was with Qim Jahl’s final weapon.

The High Council… vain, short-sighted politicians! Struggling for resources, lagging behind their enemies, perhaps they feared the Empire would fade into insignificance. Or perhaps they shook at the ramifications of the Federation’s Genesis Device? Quibbling fools! Whatever their reasoning, it was they who sent Qim Jahl to the distant Nemesis Cluster, with orders to create for the Empire a superweapon to surpass all others. This, Qim Jahl did.

Superweapons. Bah! What honour is there in simply snuffing out the lives of your enemies from afar, laying waste to a world with the push of a button? Kahless did not teach us such things. Qim Jahl’s ‘genius’, however, was not concerned with honour – only in reducing his enemies to ash.

In the seclusion of the MokTo weapons research station on the edge of the Nemesis Cluster, Qim Jahl set about creating a weapon to crack worlds open and leave them cold and dead. In the end, however, Qim Jahl surpassed himself. In a moment of frenzied inspiration, ignoring the reservations of his staff, Qim Jahl did…something…to the weapon immediately before it could be tested. The records end there. 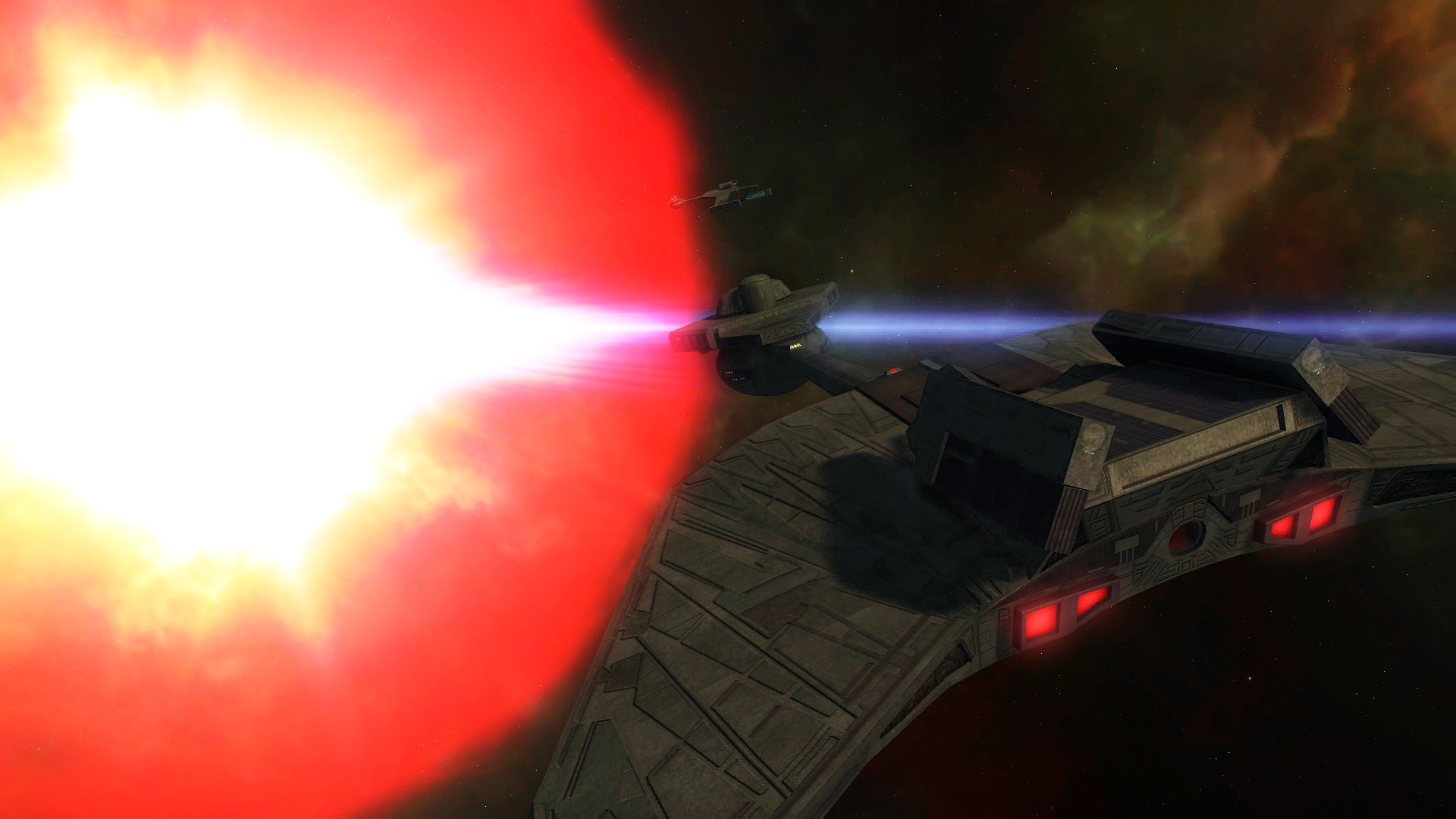 What happened next is largely unknown, except that merely hours later the entire Nemesis Cluster was devastated. An entire star system was obliterated, and the surrounding region rendered uninhabitable, lashed by energy storms that burned planets and tore ships apart. Seeing the scale of the destruction Qim Jahl had wrought, the High Council ordered the Nemesis Cluster sealed. The MokTo facility was shut down, Qim Jahl received a posthumous discommendation for his failure, and the incident was forgotten. For a century, the Nemesis Cluster has been taboo - a forbidden region of forgotten shame. 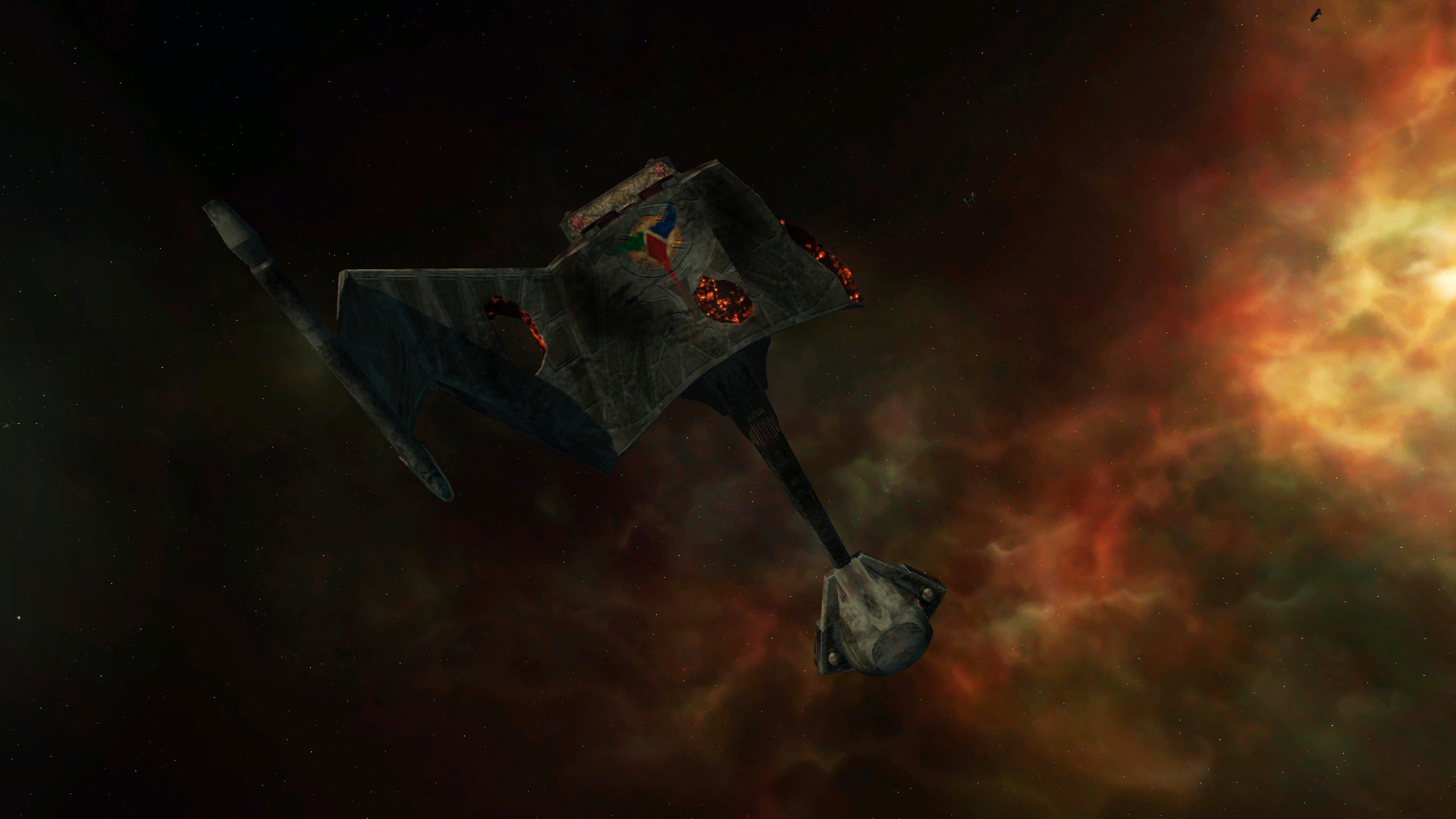 Now, the Empire bleeds. Our entire race grapples with the Dominion, a glorious struggle against a formidable enemy. Our allies, the Federation, have proven their worth time and again, even as they reel from the Dominion’s blows. Even the Romulans show signs of entering the fray. The greatest war of our time is upon us!

So why am I, General Kran, son of Noggra, sitting here, reading century-old reports and pondering the long forgotten failures of a dead madman?

The war has entered a dangerous phase. Dominion and joint Federation-Klingon fleets clash across the Quadrant. The major Federation world of Betazed has fallen. The Romulans seek vengeance against the Dominion for the murder of one of their leaders. Even our best strategists don’t know what will happen next. 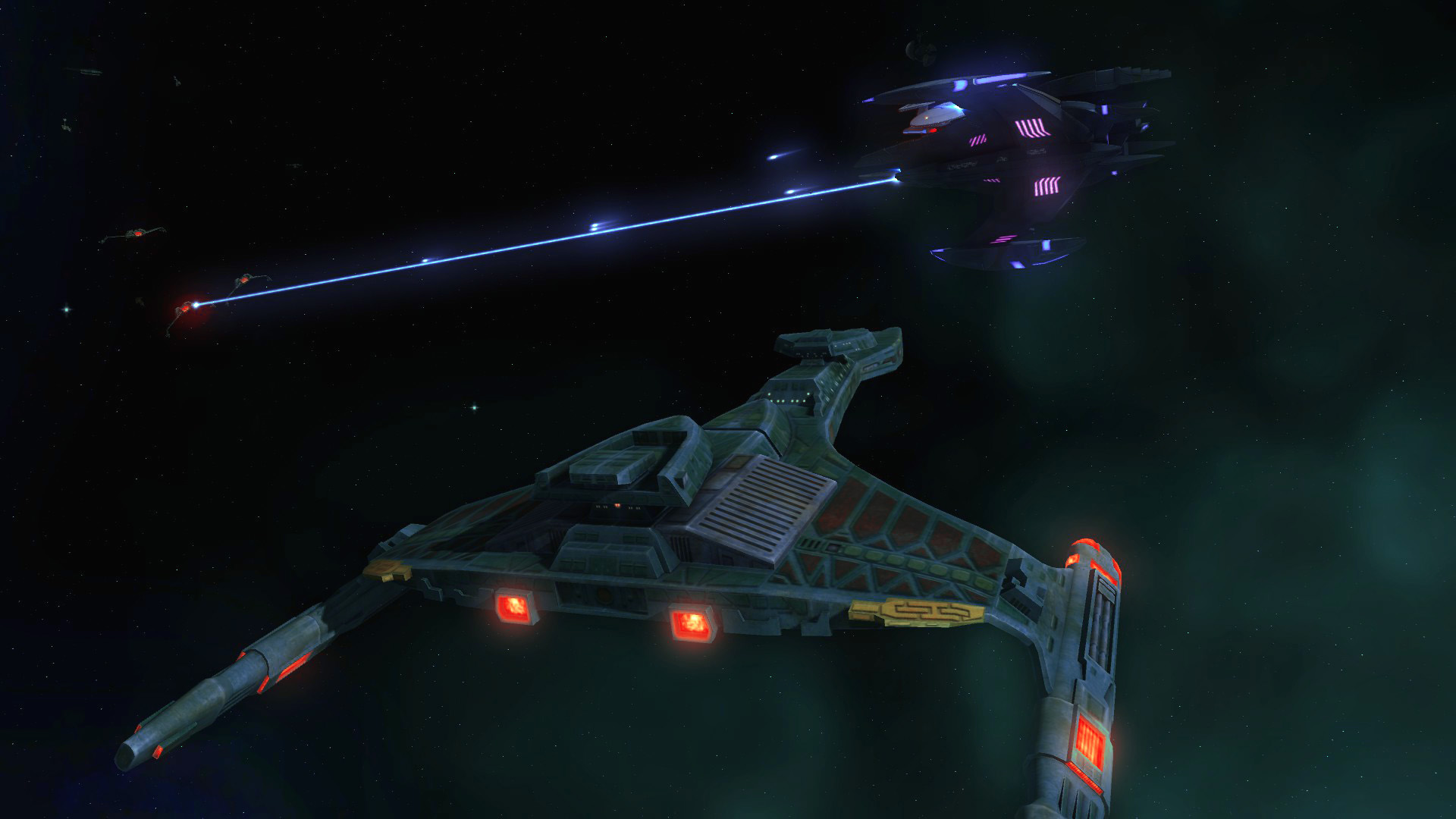 And now, fighting has broken out dangerously close to the Nemesis Cluster. Our long range sensors show scouts from both sides investigating the area.

The MokTo facility may be a tomb, but it remains intact, even after all this time. If even a fraction of Qim Jahl’s research remains aboard…

For the sake of the Empire, I must set the glory of the current war aside and lead my forces to the Nemesis Cluster. The secrets forgotten there must not be allowed to fall into the hands of our enemies. Or even those of our friends. Qim Jahl’s weapon, if resurrected, could destroy the Empire. It could destroy everything. 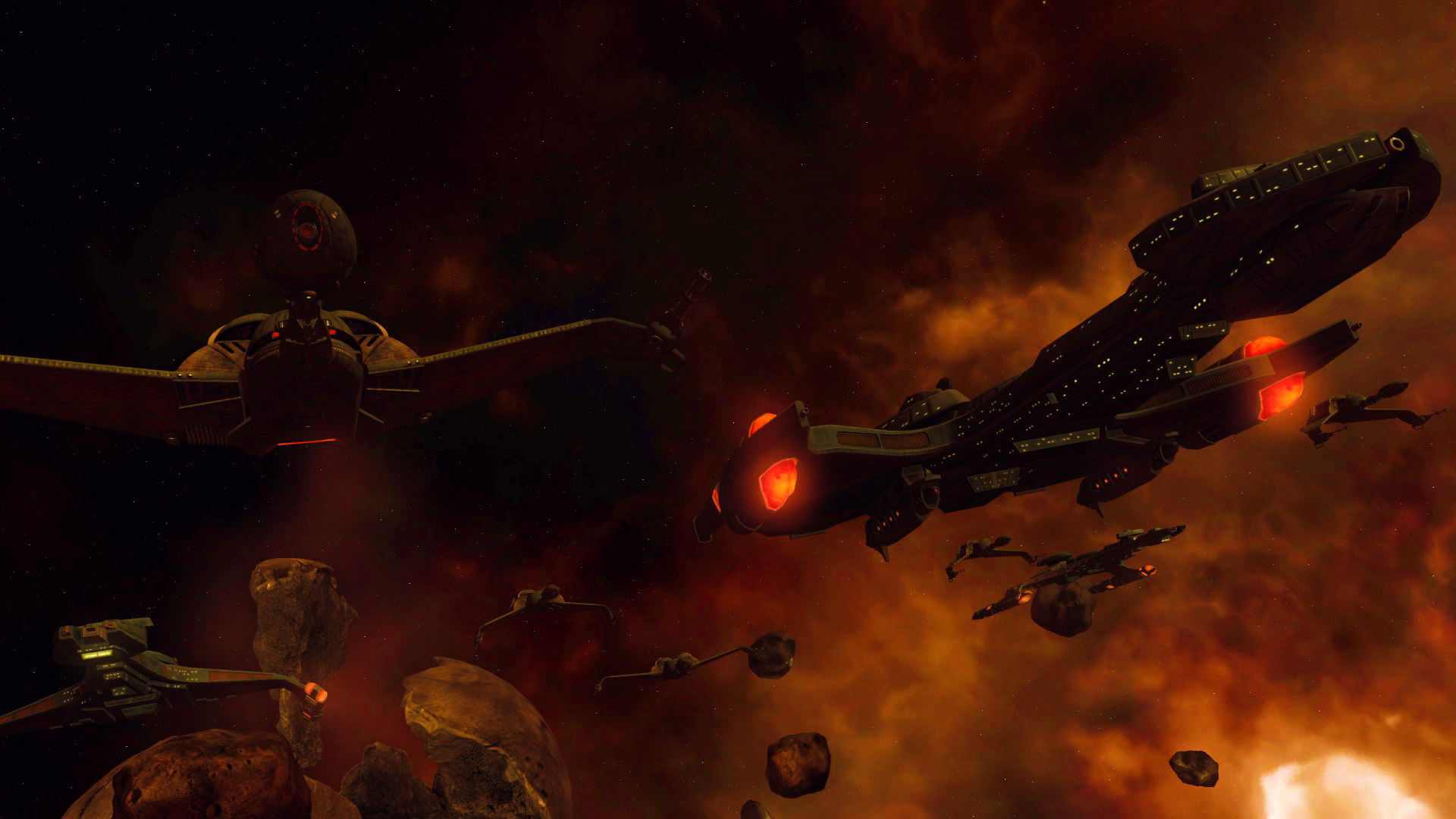 This madness began with the Empire. The Empire should end it. A hard battle lies ahead.

May the heroes of Sto’vo’kor fight alongside us.

For the empire....destroy all human scum...

i don;t think so the Fed will stop it that for damn sure. you want a war you got it.

Does this mean the update is coming soon? :D

we never like to give exact dates but expect more teasers and reveals to come over the next few weeks...

Is there any word on the update to the TFF icon patch? It was broken when the game was updated and nobody's said a word on the file's comments or the thread I posted over a month ago...

Broken? In what way ? I've used that icon patch recently and didn't notice anything?

Try to explain in detail exactly what doesn't work (Does the game crash? Does it load at all? etc etc) and i should be able to help you ;)

The game launches just fine, and loads into a game just fine, (and for the few minutes I tried to tolerate the icons just fine) but the patch doesn't change the icons back to their original states, which is a personal OCD-like issue. I've tried reordering the mods, enabling and disabling them both to no avail. The patch worked before the update but now it's broken. I only have TFF and the patch, so there aren't any mod conflicts...

There was at least one other person on the file's thread that also reported the problem.

By the way, is there a more reliable means of communication besides the forum and announcement comments? Like a discord channel or a dev website/email? It feels like this place is a bit dead in terms of responses...

just tested and it does work. No patch needed.

would you mind giving me an example of how your mod folder is set up? Mine's as follows:

I also tried moving the files into STA3_FF_Iconraplacer out of gameinfo to see if that worked, and there was no change...

Hmmm, those paths should be correct, so the issue has to lie in the enabledmods file.

Also, you could try to activate the mod via the in-game mod menu, i know that has been a big no-no in the past, but its supposed to work after the latest patch.

Mine does look exactly like that to the letter:

And I had been using the in-game mod menu to apply the changes as well... to no avail

I have no idea then, one of these things should have been the issue, i cant think of anything else really.

And the game runs fine yes?

Might be worth running a steam integrity check on sins, it is possible although highly unlikely that laa might be causing some issues, but then again, if laa was causing issues, the most likely outcome would be that the game just crashes.
Anyhow, might be worth trying atlest.

Here is a helpful gif:
I.imgur.com

Ok, so I reset the cache, which fixed nothing, then in a last-ditch, I re-redownloaded the patch and used the enclosed enabledmods folder and THAT finally fixed the issue.

I have no idea what happened when the game updated that would have caused this issue...

while its not specifically made for sta3, many of the devs hang out there, and the rest of the community is also often glad to be of help.

Response times on here can wary quite a lot, since we all either work or go to school, and it is a forum so we dont really get notifications ;)

Things i would double check with the icon patch:

1. Have you unzipped the folder?

I I did some testing, the mod's path was "Mods-Rebellion v1.85/STA3_FF_IconReplacer/GameInfo"

To be certain after that failed again, I moved the files out of gameinfo, and still got no result, even after changing the order (Its supposted to be loaded after TFF right?)

I'm still not sure what I'm doing wrong... Also good to know about the alerts.

We do our best to respond to people but sadly we can't spend every waking hour on ModDb. The most visible place to ask questions or point out issues is in the comments section.

I'd wager a guess of a release late Nov or early Dec. But looking forward to any updates regardless of a time line.

i wonder how much time you put into those beauty shots, i dont imagine theyre made on the fly

Not as much as you might think. Usually it's maybe an hour or so to gather the images, then a few minutes each to adjust the lighting so they're not so dark. The more elaborate the shot the more time it takes to set up and get right.

And of course, it greatly cuts down on time if you already have an idea of what sort of pics you want to take before you start.

for some reason reading this all I can hear in my head is Kruge from ST3.
.....if we don't leave here we'll die..
Perfect...then that's the way it shall be...

Great writing, guys. I'm curious to see how much this scenario will actually impact the gameplay in Nemesis, but regardless, the setup is great stuff. Looking forward to it! :)

Was wondering if there's any way to fix the game stuttering on huge maps? I'll have 50+fps but everything stutters every half second. I assume it's just the game engine itself not able to handle the amount of things happening, but figured I'd post something and see if anyone has a fix.

One thing that causes stutter is tactical grids, make sure that you disable that in the games settings. It might still stutter tho, just because of the cheer amount of stuff that is going on in the huge maps.

Yeah I also have that problem