Ancient warfare does not mean simply spear vs. sword. Here is a description of Amazons Total War mod's units in relationship to their tactical deployment to debunk that myth.

If you are tired of sword and spear tactics of so many Total War mods, we can pause and realize that ancient warfare is not simply phalanx meets the Hastatii, and try to maneuver your cavalry from behind, and Voila! Problem Solved, Every Time!

Like many players, I would like to think the ancient warfare is not about fighting fair, it is about using cultural development to gain advantage on the battlefield. Amazons Total War mod now has over 280,000 downloads, but some players' first impression when they visited the Custom Battle mode in the Amazons Total War mod, is the disparity between the units. Of course, when you first line up these units and try to play the custom battles, it hardly seemed fair. Some units possess thermite grenade (read armor piercing Molotov Cocktail fire jar), other units have the good ol' gladius swords with the all too familiar Scutum shields and it seems the shield always melt every time it meets the thermite grenade.

But it is perfectly logical if you realize that the Custom Battle mode arrays hundreds of years of weapon development into one display, with spectrums of units in an attempt to showcase you some of the marvels of the ancient warfare. The real game is about the race to develop better weapons and units, as well as to become a better tactician in the battlefield. Unlike the traditional schools of "strategy gamers", because you now have a higher tier set of buildings in the town, this does not only translate to higher armor protection value or higher hit points, but also a higher strata of thinking, and higher dimension of tactical integration of your army!

So this newsletter is the first part of Amazons Total War Weaponology attempts to introduce to the readers some of such higher tier weapons and units and how they can be used as well as when they can be recruited. So besides spears and swords, we also have

BATTLEFIELD CONTRAPTIONS, such as minefields

The oldest archeological proof of the use of wheels is 5,600 years old. But the wheel might be in use long before the current archeological finding tracing to that date, From the anthropological view, the use of wheels perhaps dated as far back as 7,000 years, for many ancient Celtic and Germanic tribal symbols are that of a round circle with spokes. In other words, the symbol of a wheel.

As far as military use is concerned, ancient Oriental text described historical events in around 3,000BC where "carts" or "wagons" with compass were used, so the army riding in those vehicles will not get lost in the desert. At around 600BC, standard military doctrine of many ancient nations, such as Persia, Northern India, and China is that army deploys into battle with wagons accompanying the infantry to provide for the breach of the enemy formation, and to provide close-in fire support. And the deployment of light chariots to harass and to pursuit of the enemy. In the battle of Mobei in 119BC, in an encounter against the Hunnish Empire, at the time the strongest empire of the world, Chinese troops used war wagons to form into a tabor, a mobile fortress, and used crossbows to defeat the Hun army led by the Hunnish Emperor whose cavalry outnumbered the Chinese 16 to 1. The Huns suffered a great number of casualty during the initial onslaughts and failed to overrun the Chinese position. As the Hun force retreated into camp and trying to re-group, the Chinese force used the war wagons as battle-tanks along with the cavalry to encircle the Hun camp in the evening and completely routed the Hun force, The Chinese force then use the war wagons as military transport to besiege and then to occupy the Hunnish Emperor's home fortress 160 kilometers from the battlefield.

When a migratory people is on the move, the wagons are their homes. When they ran into a fight, their wagons become their fighting forts, both defensively or offensively. With the owners inside fighting with desperation to get the enemy off their backs, the wagons can became formidable weapon platform in the hands of a capable general.

Horde Wagon is equivalent to the machine gun tanks of WWI and WWII. 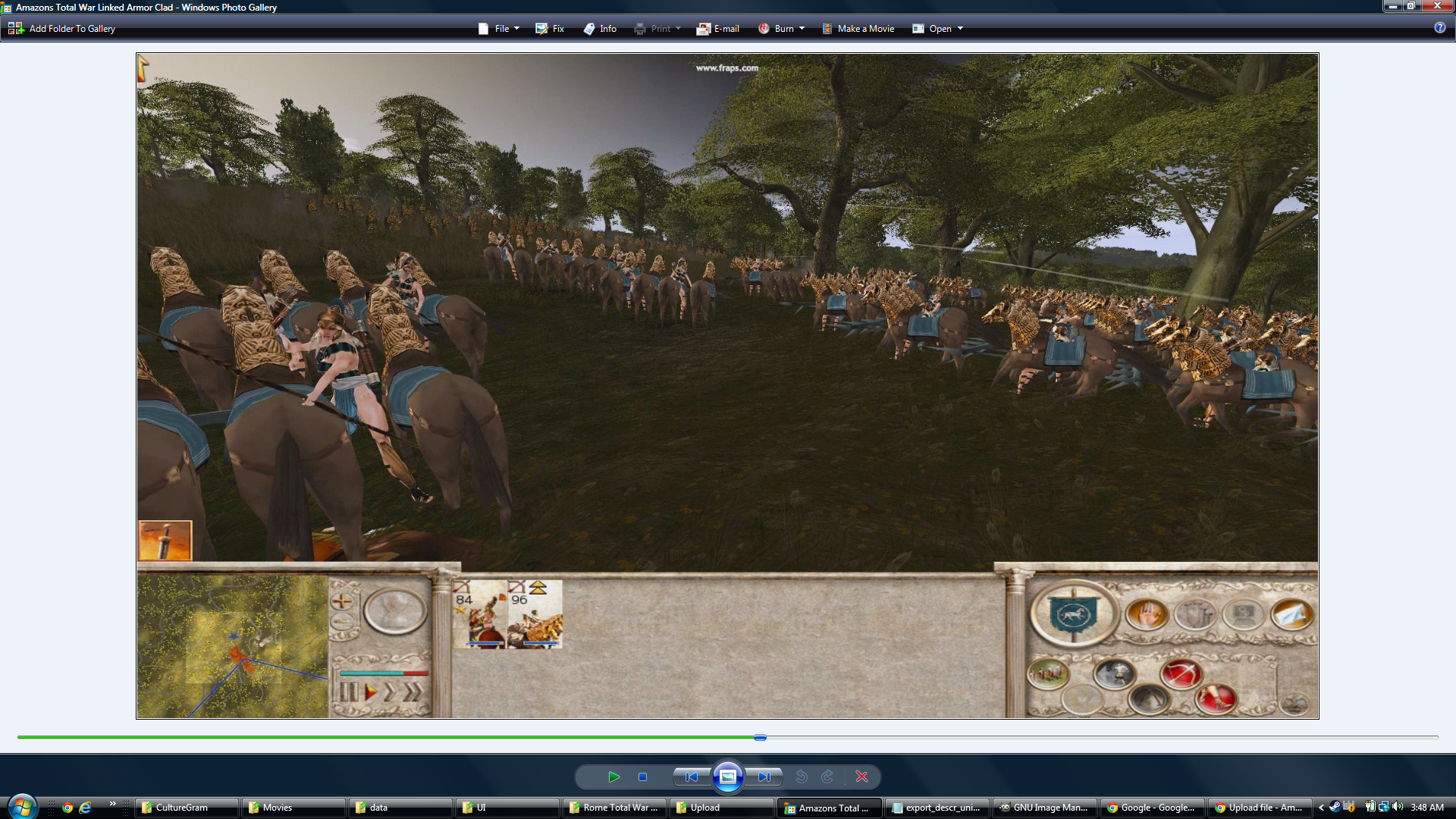 Linked Armor Clad Cavalry, often misnomered as Linked Cataphract are heavily armored horses connected together with yokes or chains. So the horses will not swerve around the intended target but the entire formation will charge the enemy head-on. Even if a few of the heavily armored horses are killed on impact of the charge, the momentum will carry the whole unit forward as to obliterate the targeted enemy formation.

Because only a few riders are needed for each rank of horses, this also reduced the number of soldiers needed to form such a unit. This is desirable for factions which are technologically advanced and with plenty of equestrian remounts but very low on available recruits.

Compared to other heavy cavalry units, Linked Armor Clad Cavalry are similar to heavy chariots with a great deal more mobility.
Even though the linked armor clad cavalry is a powerful heavy cavalry unit, its origin is rather humble due to a measure of desperation in a desperate time. The idea was conceived when there were plenty of horses and armors, but few cavalry soldiers left to man them. As makeshift of an idea as it may be, the tactics succeeded beyond anyone's wildest dream, many asian steppe potentate later copied this tactics and became powerful empires, among them are the Khitans, the Tanguts, and the Jurchens, just to name a few.