Alot is happening on the development front with Alien Arena, and here is a sneak preview of what is to come.

Alien Arena 2011 doesn't have a release date, but that doesn't mean we haven't been continuing to develop the game at an inhuman pace. A number of things are being worked on, some are completed, some are partially done, and others are in the planning or early stages.

One of the most important features which will really help out with Linux users as well as our (hopefully) upcoming OSX port, is the implementation of Autotools. Jim "Stratocaster" Bower has devoted endless hours to this project, and now has merged his changes into our main SVN branch. Along the way, much code was cleaned up, bugs fixed, and some little optimizations here and there that always add up in the end. Speaking of which, our long lost coder, Emanuel "Blackice" Benoit has returned from being a rocket scientist(literally) and gone to town on our codebase. He has already completely re-written our in-game IRC client, and is looking to revamp the menu system next.

Another feature that is receiving some real attention now, is the implementation of the Open Dynamic Physics Engine(ODE). This is being used for our ragdoll physics, which we hope to have completed in the fairly near future. Along with this chore, I personally am working on some new maps, along with Dennis "xEmpx" Zadlach, which you can get a little preview of below! 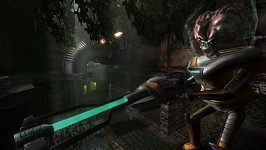 These are some images of Dm-annhiliation, our newest map, which features a spooky theme in a burned out city, and features some very fast and dynamic gameplay. We are planning no less than five new maps for the release, and perhaps even some updates to older maps that don't go into the archives. We also are planning a brand new player character to round out our posse!

Keep checking back, I will post more news on development as it happens, which these days, is pretty much all of the time!

Sincerely, you guys are amazing!!!
iD Tech 2 looks like iD Tech 4 with your upgrades.

Aaaahahaha! That must really suck for any of the coders working with Blackice.

"Um, I'm not sure what exactly we're doing with this here."
"Oh c'mon, it's not rocket science! I should know!"

But hey, if I were a rocket scientist, I would use that line at least once every day. Screenshots are looking amazing, ragdolls shall be awesome.