A new beta has been released for Age of Chivalry: Hegemony, adding three completely new countries: the Papal States, the Kingdom of Naples, and the Kingdom of Hungary, as well as new units, technologies, graphics, and many other features.

The three new countries made available in the new beta, the Papal States, Naples and Hungary, will add to the large number of European countries that were already playable in Age of Chivalry: Hegemony.

They not only come with their own technologies, units and policy decisions, but even have unique features. Gain florins for every building you destroy as Hungary, invest in Jubilee Years as the Papal States to gain florins, or quickly train up an army of knights straight from your stables as Naples. Each also has a wide array of policy decisions to choose from, to shape your country while you play.

Other countries have also seen changes. Not only are there new technologies and units, but new graphics have been sprinkled throughout, both for units and buildings, and some castles now even have original, progressing construction graphics.

A new version of the AI is included not only supporting the new countries, but also reconfiguring the original ones. The AI now uses more varied troop combinations and strategies and utilises new technologies.

Furthermore, the Age of Chivalry campaign has been updated. The scenarios have been combed through for bugs and rebalanced where necessary, and an additional scenario has been added, created especially by Julius999, depicting the 1379 Chioggia War between Venice and Genoa! 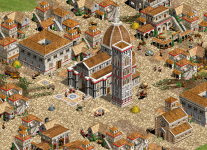 N.B. This is still a beta version. Not all intended graphics have been completed: some of the new countries don't have original graphics for their monument or history files yet (to be fixed in an upcoming update), and future versions will also add more new unit and building graphics!

wow mod still up... greeting :) thanks

I have no words. You're awesome and this mod is awesome.

Thank you for this great modification!!!

Please consider migrating this to the AoE 2 HD Edition , it would be much much better

Hi, the AI is difficulty-dynamic and if you have trouble with it, it might be best to lower the difficulty level. It's definitely possible to defeat it without using cheat codes!

Unfortunately AoE2HD doesn't support mods that are as complex as this one, and it's not possible to port it over. Considering AoKHD's lag problems I also doubt it would be 'much much better' - it would probably play very slowly. It also wouldn't allow for many of the features present in this version of the game.

Pretty please with a cherry on top ?! At least consider it for the future...

Wish i could just install Chivalry Hegemony right away on it

I thank you anyway , Hegemony is serious work and it's A+ for me

Like I said, it's not possible to do so, so unfortunately pleading won't help. Transporting the many features of Age of Chivalry: Hegemony into AoK:HD is simply not possible.

Anything is possible if you want it , sir

Hegemony could become an entirely new spinoff of AoE 2 even, if enough work would be dedicated for it and ideally re-made within a new graphics engine to catch up with the times you know

AoE the classic really looks bad on HD resolutions even though Hegemony has in-built widescreen.The HD version brings a lot of improvements in that regard

I'm a 2560 x 1440 player so what about people like me ...?
Sorry just being sad about this is all. I respect your work a lot in any case , because no medieval game has so much history in it like Hegemonia does

I wanna give the example of what those guys did with Fleet Operations after they started being a simple mod for Star Trek Armada II Fleetops.net

I sure hope before that happens you will fix the AI

That's not how it works. I'm not actually even sure what you're suggesting because it doesn't make any sense. Are you saying that the developers of Chilvary should reverse engineer AoKHD, and then, not only that, but they should continue on and write a new graphics/game engine from scratch in order to increase the quality of the graphics and force compatability with Hedge? LOL. Sorry, but that's actually pretty hillarious.

On your first point, you're wrong. Hedgemoney can't be a whole new spin-off of AoE HD. That would require Microsoft/Steam work in conjunction with the developer of Hedge, and, they'd have to basically 'undo' all the changes that make Hedge incompatabile with the new AoE anyway, would it be cool? Yeah, sure, but it's absurd to actually think that happen. Not only that but Hedge changes the gameplay so radically that I doubt Microsoft would even want to support it in the first place.

What other modders have managed to do with other games is entirely irrelevant.

Your response is very ridiculous and more hilarious than mine and i wasn't addressing to you anyway , sir

Anyway, at this time Age of Empires 2 HD is at the 4.3 version that fixed , if not removed altogether ALL the LAG and as a side note there is an expansion on the works to be released this year and hopefully they will make the game more moddable along with it

Age Of Empires 2 the classic is TOO OLD , too dated , too sluggish and the AI for this mod is a major problem.
The mod as it is it's meant for old computers that are even more than a decade old but not for modern , actual hardware like i'm sure most people have these days , clearly more suited for AoE 2 HD not for AoE 2 the classic.

Is easy to dismiss someone on the basis of excuses but i simply cannot play the mod due of the friggin AI ( i can't even reach to build all buildings for a current game because they spam the hell out of the place with troops and ships ) and the sluggish old AoE 2 engine despite raised to 60 frames now.
Not to mention that units are made ridiculously weak and die like crazy while buildings are overpowered especially castles and the AI spams with castles like it's a celebration of castles and this happens at the easiest difficulty while i'm using cheats.So do the math

AoE 2 HD has two forms of AI's where i can choose to play versus an AI similar to a spammy one ( yet beatable and fair compared to this one ) and the good old AoE 2 AI.
Simplicity itself.All i wanted is the AI to behave the same like it was in the vanilla game difficulty wise

I'm not such a competitive player and i'm not spending my time just in Age of Empires 2 because i also play the other games from the series : AoE 1 and 3 plus others like AoM , so all i wanna do is be able to play a normal un-stressful match.
There was even a topic here or elsewhere regarding this mod's awful AI.I know what i'm saying.

So , this is my personal experience with the mod and i wasn't pleading at all but if being nice doesn't do it then i won't be nice anymore.

Don't get me wrong : i love everything about it in the rest and i could not wait to play but these issues disallow me to play and enjoy the mod and i have Age of Empires 2 HD + Forgotten ,i don't have the old game anymore and i have fairly modern hardware not a decade or more old hardware

Do what you want , you are not gonna change this just for me but i'm one of the people that cannot play this mod at all
Lucky me there are more other mods i can spend my time with

Good fortune to you

Wow thank you ! You've made my day Jorri !