About the simple and characteristic terrain system of Cropling.

Recently I was asked how my terrain system works,
so I thought this could be explained in a little update, along with pictures.
Its a pretty simple and quick-made system to be honest !

Basically it consists of mesh tiles which arrange themselves according to a worldmap-texture.

I got 3-5 different ground types on a single map, for example: grass, dirt, water, road and small heaps of sand.

Every tile logically has 8 adjacent neighbours, so all I do is asking every tile - one after another -
which nearby tile (pixel on the worldmap texture) isnt of the same/own type.
A matrix occurs. Example: 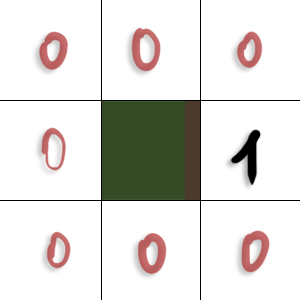 The last automated procedure is the creation of clutter. Clutter is just small, randomly placed foliage that doesnt serve any purpose besides looking nice. :)

So after every Gamstart or new year, the clutter will be placed differently like those
grasspatches on a grassland in nearly any engine you can imagine. basic stuff.

Since I created just a small count of tiles, there are of course some limitations.
For instance can a grasstile never exist alone, it always has to be at least a batch of 4
of them to generate a flawless terrain.

Nevertheless, this simple terrain system is very grateful when it comes
to quickly creating new worlds and regions.
I only have to paint a basic layout and load it in !

Please support me at: Igg.me !

thank you. :)
yeah, why no easy readings about some mechanics, right ?
I always like simple stuff. :D

Well then that's something.