Post news RSS A World of Ice and Fire v1.3

News regarding the release of A World of Ice and Fire v1.3.

Here's a small patch fixing some of the most problematic issues with gameplay. You will need to install the contents over your v1.2 folder. I am happy to say this build should be save game compatible, though I would always recommend starting a new game after any patch.

* Battle continuation added to sieges.
* Expanded the defensive area for the siege of Pyke.
* Changed the way killing lords works;

- If you are at war with the faction of the lord you killed, the relationship loss will be less.

- The relationship differs depending on the reputation of the lord killed.

- You will get a big hit for killing an upstanding lord, but if you kill a debauched lord the hit will be much less.

* Joining sea battles when enlisted with a lord will now correctly spawn you in a sea battle.
* Fixed an issue with Golden Company Pikemen weapon skill.
* Fixed an issue with Westerland Pikemen weapon skill.
* Fixed regular sailors not giving ship speed increase but sellsails giving twice as much as they should.
* Your quest log will now update correctly for the lands of always winter quest.
* Small issue fixed with A Lannister always pays his debts quest.
* made a few small changes/fixes to ten towers scene.
* Attempted fix for lords companions being cloned when imprisoned. (requires a new game).
* Fixed issues with hair + beard textures.
* Fixed a small issue with Whitewalker meshes.
* Your own faction should no longer hate you when you kill a lord.

Feel free to check out this lets play of the latest full version of the mod v1.2

Here's another small preview for 2.0 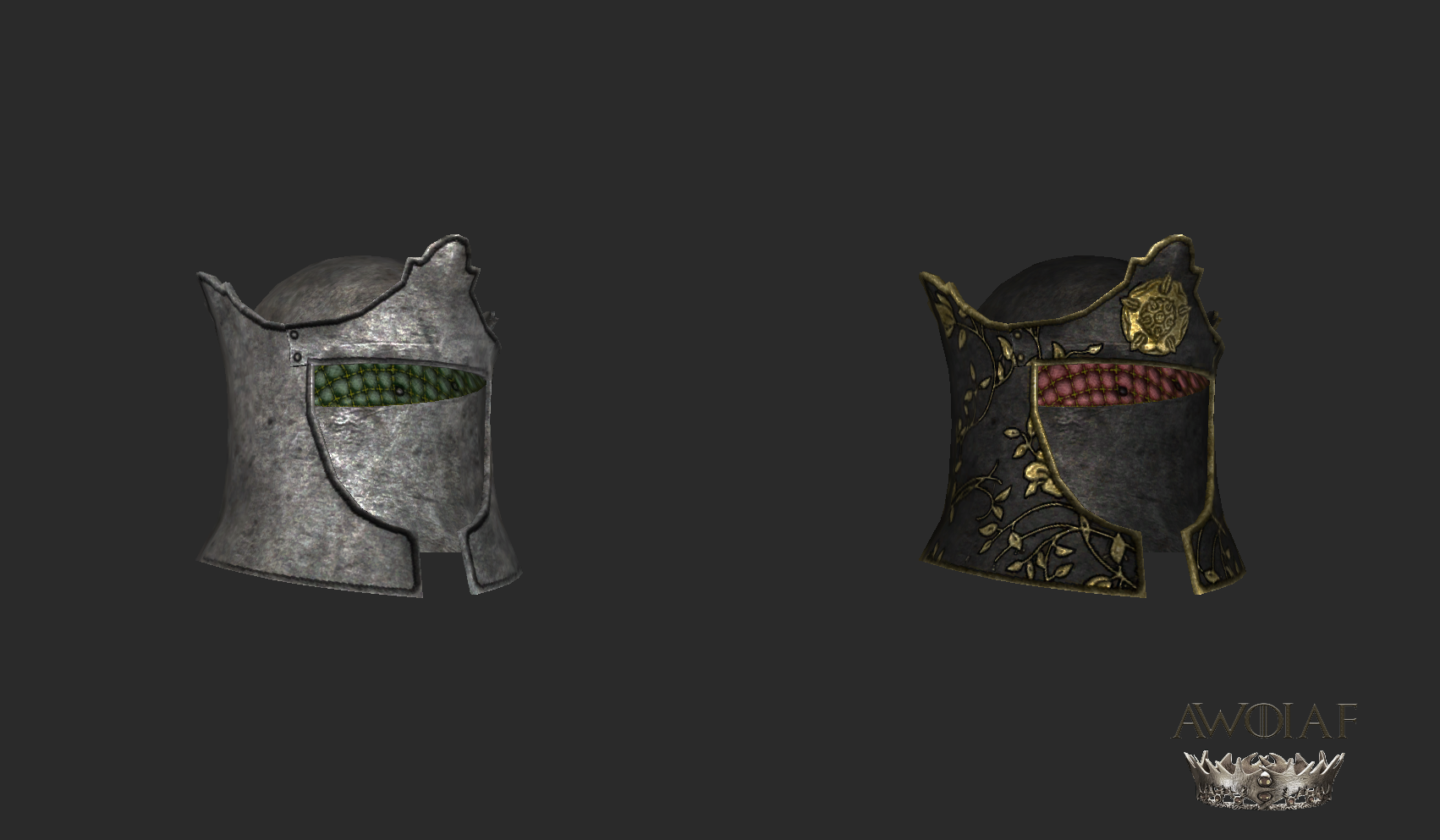 WOW PRODUNO CANT WAIT!! How do I access the music in the game from youtube, I am not hearing them anywhere and when is Jorah Mormont going to be a companion? v2.0? :)

Unable to open 15centuryweapons brf, so CTD while loading. Have this since the 1.3 update.

Finally, I can kill lords with ez!

I downloaded 1.2 and updated to 1.3 and i got a Runtime Error know why?

please reduce upgrade cost.. its so much expensive :(((

Do tournaments my man.. imagine as if this is the real game of thrones world.. you don't get a great army unless you're a warden or paramount lord or some shyt.. unless you cheat ofc., although it is harder to upgrade troops and cost are higher than .. ACOK?

I think if you play with the files, you can reduce the troop cost and upgrade the exp your troops get

Only problem with this awesome mod? So many locations you need to be right near to see. I spent hours looking for the bone bridge, before realizing it appears once you go to a specific place. Same for looking for white-walkers or whatever vague thing you're supposed to do in the quest ''The Lands of Always Winter'' - i spent nearly 100 days wandering and no white-walkers appeared. I think it could even be bugged. I've heard of people with Savegames of 1000 days where no white-walkers invaded, too.
Otherwise it's so polished and awesome, it puts crappy vanilla campaigns such as the one in Viking Conquest DLC and Fire & Steel to shame, and other mods to shame by using the upgraded features of viking conquest DLC where most of them do not.

They must have not done it properly, I got the WW to invade at around 350 days or 400 day

You download the patch and copy the content in that download over to the v1.2 folder and paste it, so it overwrites whatever files need to be overwritten in the v1.2 folder.

How do you attack a castle? I got made the Marshall of Dorne and I have no option to actually attack enemy castles, just gives me a bunch of useless preparation options while all my troops die of the flu?

For castle/town sieges you have two importants tabs: 1. Prepare Siege 2. Prepare assault.
Prepare siege gives you the opportunity to assess enemy's defenses / put checkpoints/blockade / sanitation.
Prepare assault gives you two things: build mantelets (reduces vanguard's death) / clear the ground and prepare for assault. The former is optional but the latter is compulsive to enable the "send the vanguard and lead the troops" options in the "prepare assault" tab.

Therefore, to unlock the possibility to go in "real time battle" and actually taking the castle you have to "clear the ground and prepare" then go back to the "prepare assault" tab and select "send the vanguard and lead your troops"
hope this helps.

How i can get the valyrian's sword??

I Think you have to have around 600 or so renown and have to go to Qohor with the Lands of Always Winter quest active.

Hey, I've been playing this mod for a while and it is absolutely one of my favorites! I just had a few questions about upcoming content. Do you plan on adding more "story quests" kind of like the ones at the very beginning of a new game? If so, would these possibly include various events such as the Red Wedding, Petyr Baelish's rise to power in the Vale, the Targaryen invasion(Dany or Aegon), etc? Also, is there a way to build on the settlement building mechanic? When we build one and upgrade it, not much really happens since the other lords don't really seem to notice that it exists. It would be cool to see a castle sprouting up as a new power. Lastly, there's just a few bugs(?) I've noticed for example, Sansa and Arya Stark say that their father is Ned even though he's not in the game. You can still court them but can't really progress much. Perhaps if Catelyn Stark was their "guardian" and existed like Barbary Dustin or Maege Mormont? I really hope to hear back, this mod and this series is one of my favorite of all time!

Hi, There is already the Targaryan invasion (Varys questline in Kingslanding)

Thanks for letting me know! I was hoping so. Where do you find him?

You find Varys between two pillars of the throne room in King's Landing. Simply go to King's landing > Lord's hall and there you go. Just a tip: for a quest where you have to capture someone, don't forget to order you troops to use blunt weapons.
After the whole questline is finished, the Targaryan invasion will begin shortly (±1 week in-game time)

or be like me and knock everyone out yourself

but ned is there father...lol

Is the install process the same ACOK? I would love to play this one if possible. Been watching reviews and play throughs and it looks awesome.

You just download and place the folder in modules and there you go !

Is 2.0 still in the works and when is the assumed release date? Thanks for all the hard work.

Hey Produno, so is the lands of always winter quest broken? I'm not sure what else I can do after defeating the white walker party. do I need to get valerian steel for it to work?

How can i find timber pellet & how can i kill lord.

i find timber in kings landing its rare and i wouldnt recommend killing lords....kill the kings instead more fun but to kill them talk to them as a prisoner and comment them of treason and boom a dead lord/king and the world hates you for it even the wildings hate you for some reason after beheading joffery

so is anyone else having a problem with the lands of always winter quest not being able to turn in?

Hi I love your work, but can I suggest something, the armours

The armours avaliable to us the player seems very limited

We can't dress our characters as night's watch or lannisters

and maybe some more holdings in Essos, it seems rather empty apart from the area of Volantis

Thanks for all the hard work mate, you deserve a kings ransom for the amazing mod you've made

Hi,i read somewhere that you can get the kingsguard if you are the lord of kings landing,i got it,but im unable to find them anywhere. :/

Hey Produno, I just wanted to say that killing lords still seem a little warped. I love the fact that your own faction doesn't hate you and I thank you so much for that. However, the consequence of having everyone ELSE in Westros and Essos hate you is still a little overboard. I killed Ser Gregor Clegane and everyone hates me. I mean even the free folk hate me(which they should, but not for killing Ser Gregor). Other than that, this mod has eclipsed PoP, Nova Aetas and Medieval Conquest as my favorite GAME(not mod) to play.

Agreed Ser. Although eclipsing PoP is very arbitrary (i prefer stable game than features tbh...), though I agree with Nova Aetas.

Hi Produno, I've read the changelog and I'm glad that you've added optional ways of obtaining items. Will the Lord Commanders armour and the Hounds' helmet also be obtainable? I really love combining these pieces for my Northern/Night's Watch playthroughs.

I usually also use Longclaw with it because it fits the whole style, but I guess that I cannot obtain it as of v2.0 as I will never take up arms against the NW and fight Jon Snow...