So I have been spending much of my time with not gundam stuff(aka IRL) and today I went in and did some work. Here is a general update on where the project is.

So yeah, I spent most of the past month with my dad helping him do remodeling. Which isn't half bad, I learned to do a lot of things not computer related. Of course this meant my time to work on grts was scant few moments between sleeping and waking to go help my dad.

Anyway, tonight is my gf's 30th birthday and I am going to spend it with her so yeah, everyone wish krystal a happy b-day if you can when you read this post.

Now onto the important stuffs. Essentially what details remaining are just janitor kind of stuff. I am going to once over the maps missions and menu. So I just finished writing this stuff up and will be leaving shortly to go shopping. Here is a shot of what is left: 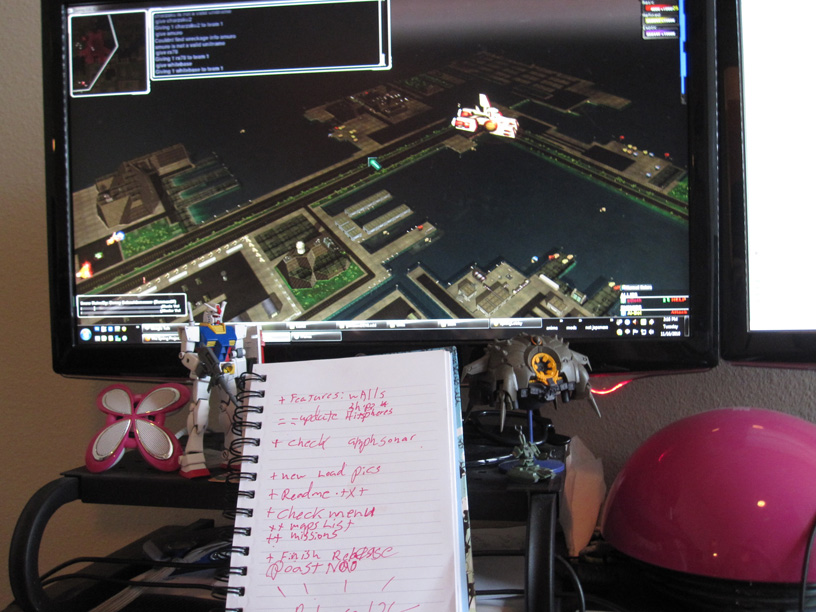 Mostly before this I was doing other things like tweaking gm animations and models along with tweaks for in game visuals. Some nice fixes to the "spawner ai" and adding weapons/effects/animations/more detail to units.

Anyway, you guys have fun out there, be safe and no worries as soon as the release is ready I will have a nice detailed release post for you(truthfully it is near done already, I just have to take screenshots).

ty for the update and i hope her bday is a good day and btw smoth this is going to be awesome!!!!!!!!!

It must be a seasonal thing that makes parents want to remodel their house in the fall- I'm helping my dad with removing and installing new carpet.
Thanks for the news update. Get her something that says, "30 is just a number".
The continuous commitment to this game for so many years is why I voted GundamRTS for Indie Game of the Year!

thank you but I feel minecraft is the indie game o' the year. However, do note grts fluctuates between #50-120ish of 2500+ so I'd say it is pretty well liked around here. Who knows, maybe one day it'll make the top 10.

Yes! You have been voted GundamRTS!
Happy Birthday Krystal!

Happy Birthday to your GF and thanks for the update.

Very cool smoth, can't wait to see the new version in action. If what I've seen in the sauce is any indicator, epicness will ensue ;p

HAPPY BIRTHDAY KRYSTAL, I cannot wait for this indie to come out, thanks for the update