When is morale not morale? When is mob mentality a bar? This and many other riddles solved on the Okhlos devblog!

Welcome back to the fantastic, bleeding-edge, always on-time Okhlos dev-blog!
This week we want to talk about two little things: the Mob Mentality Meter and the Morale stat. They’re two elements of the game that you might’ve noticed by this point but that we’ve never really talked about or explained. We’re going to fix that today and tell you a little bit about how we’ve pared them down and combined them to make the game even better!

You’ve definitely seen this one if you’ve been looking at our screenshots, watching the videos, or tuning in to the Let’s Plays! Also known as the ‘Mob Meter’ or the ‘Mood Meter’, the Mob Mentality Meter is the little bar at the top of the screen that denotes how much energy and furor your mob has: 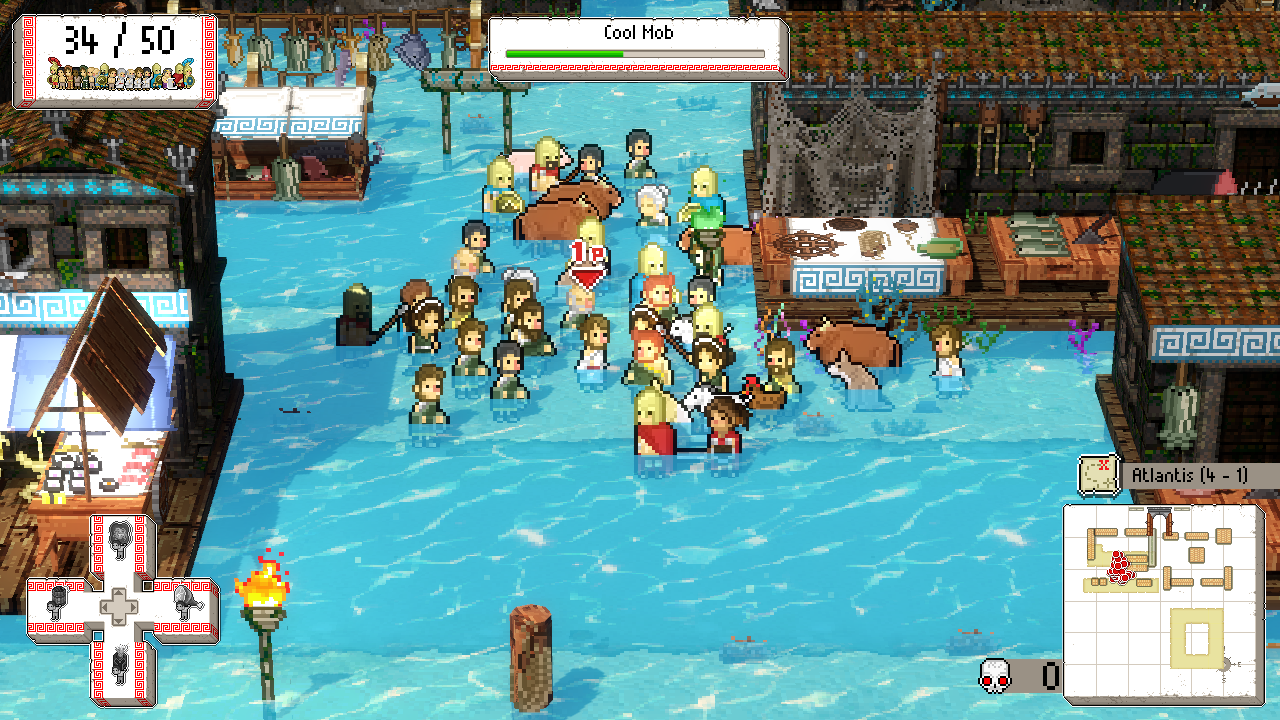 It was a cool pool party for the Cool Mobs at my school!

Depending on how many units you pick up, how many enemies you kill, and how much property you destroy, the meter will go up and down throughout play. The game starts you out at ‘Cool Mob’; from there the more chaotic and unruly and big the mob gets, the more the bar fills up, passing through Reckless Mob, Frenetic Mob!, and finally MEGA CHAOTIC MOB!

Originally the idea was that each of these stages would award you a small damage bonus and these would start adding up to make an important difference in the game. We haven’t gotten around to implementing that yet and the idea is still on the table - we’re unsure if it’ll make it in at all – but we do have a very tangible reward in the game for making it all the way MEGA CHAOTIC! :
You get to demolish and tear down buildings and just raze everything to the ground! 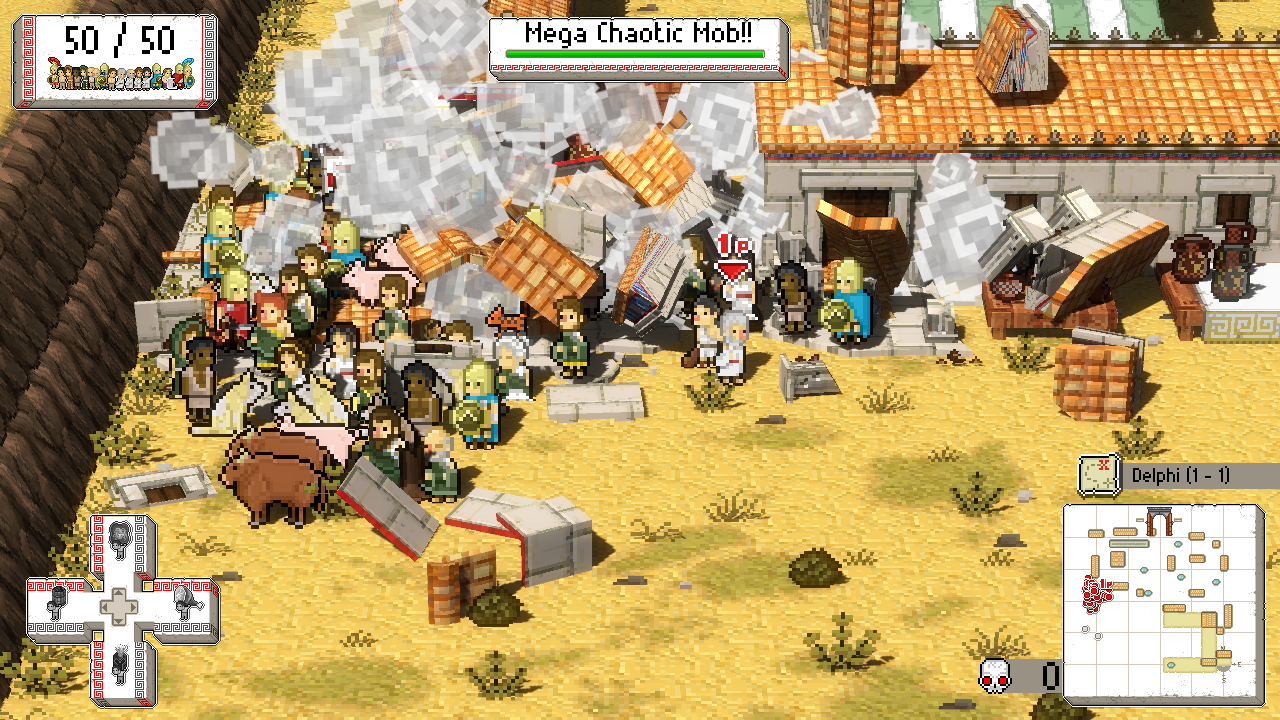 We may have sunk a few hundred hours into Rampage as children. Can you tell?

Nothing is really quite as satisfying as that, don’t you think?

However - not everything is fun and games and destroying houses! You’ve also got to be careful your mob doesn’t get bored! A mob that hasn’t smashed anything in a while or found new recruits is likely to become a Depressing Mob, and as we all know - depressing mobs are no fun! No one wants to be part of a depressing mob. Units will slowly start leaving your mob if you’ve become Depressing, so you better find something to smash or a new recruit to liven up the place - and you better to do it quick! 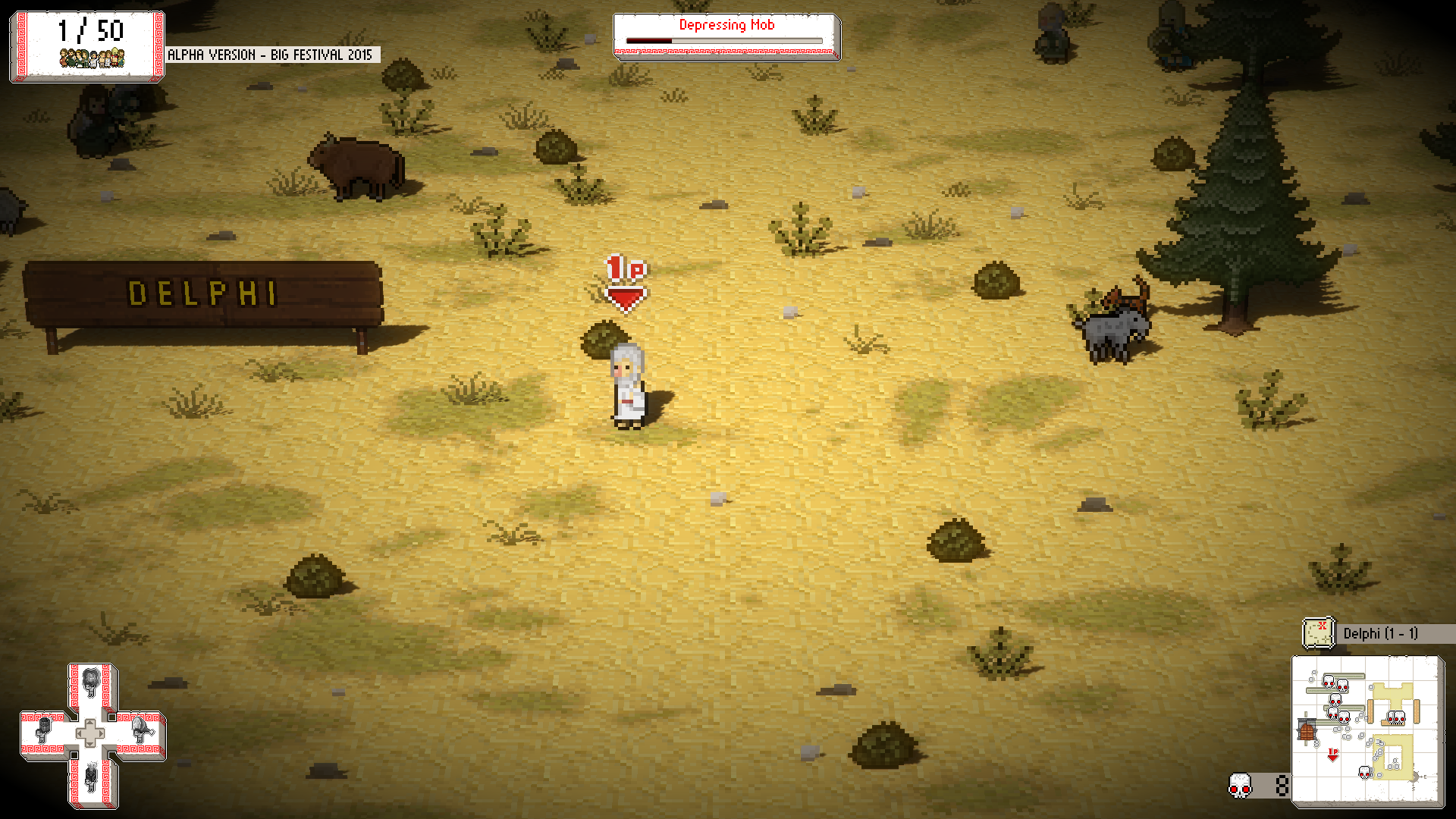 Sure, misery loves company, but misery also likes going back home to curl up on the couch and binge on Netflix.

The Morale Stat
Now, unless you’ve been paying reaaalllllly close attention, you probably don’t know about this one. It’s one of the more obscure and hidden-away stats in the game, and compared to Attack, Defense, and HP, it’s harder to puzzle out what it does for your units.

Morale is the stat that determines how likely your unit is to abandon the mob when things get tough. When a big hulking enemy puts its foot down and tries to intimidate you, Morale is what determines whether a unit flees in terror or sticks it out to fight for you. When you’ve run off to the other side of the map and a unit has lagged behind, Morale determines whether it runs after you to catch up or whether it shrugs its shoulders and finds something easier to do.

(We also have a few hazards that deal with and affect morale… but we’re not quite ready to talk about those yet. Stay tuned in to our devblog for this juicy secret! ;p) 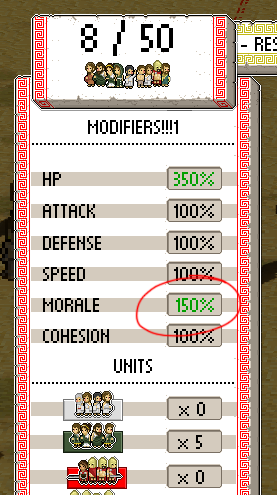 However, something was bugging us the other day. We were watching Sparrow’s excellent Let’s Play! of Okhlos’ Sparta level when we noticed something that made us rethink how these two mechanics work and interact together.

It’s purposefully difficult to raise your Mob Mentality in Sparta – definitely harder than it is in Delphi. That’s part of the challenge of the stage, and Sparrow was struggling with it for a bit. His mob was getting depressed and he struggled to keep the meter up at ‘Cool Mob’.

Searching for a way to keep his people happy and motivated he came across ‘Parmendies’ in the game’s shop – a philosopher unit that raises your Morale by 25%. He made the obvious association: ‘Morale is what raises your Mob Mentality!’

We immediately slapped our foreheads.

Seeing it play out in front of us, that association makes complete sense! Morale is the word one would use to talk about one’s confidence and zeal in the face of hardship and opposition. If there were a stat that raised the Mob Mentality Meter it should totally be called Morale.

But there isn’t. And it’s not.

So Sparrow paid the hefty price for Parmenides thinking his Mob Mentality would boost up and he would be rid of his pesky problem, and then, well… nothing changed.

This was our fault. Our handy-dandy list will illustrate why:

So, burdened by this great dilemma, we huddled together, talked it over, and put our brains to work on a solution.

Well, it was pretty easy actually. We figured Sparrow was actually kinda right. The Morale stat should totally boost the Mob Mentality Meter.

So now it does.

This not only gets rid of the meddlesome confusion and makes the game more intuitive, but it also adds functionality to a stat that wasn’t really seeing much use. That’s great! With a very simple change we actually improved the game on several fronts and reinforced our game mechanics by consolidating them!
Hurrah! Who ever said this game development thing was hard! :D
(Just kidding – this stuff is terrifyingly hard and difficult and oh god there’s so much math and nothing is ever really done and we have to test and test and test and it takes ages and aaaaaaaaaah someone please save us! D:)

Well, this was our insightful, bleeding-edge, desperate plea for help this week! I hope you’ll join us next week for a bit more fun and misery! Meanwhile, check us out on Facebook and twitter, your likes and follows help us a lot! And please throw @pfque_ , our resident writer, editor, and translator some peanuts for penning this beautiful blog post while we were busy making games! (And not binge watching E3 pressers~ ;D)