"Let me get this straight. You said 'Kiss my Wookiee!' to the most powerful warlord in the galaxy?" - Isolder, Hapan Prince

"Let me get this straight. You said 'Kiss my Wookiee!' to the most powerful warlord in the galaxy?" - Isolder, Hapan Prince

As you probably noticed, in 0.95 starting forces are essentially the same pairs of Lancers and Carracks everywhere you go. In 1.0 and on, the galaxy will be far more populated when you start off a game.

Most prominently in a post Imperial-collapse galaxy, are the various Warlord groups. In the areas of space canonically controlled by these independent Warlords, you'll find their forces on patrol, with a bit of different composition depending on the group in question. Their canonical capitals also act as strongholds for their mini-Empires, where you'll find the Warlords themselves leading their fleet from their own flagship, such as Zsinj on the Iron Fist (see below). These Warlords were often quite fond of Super Star Destroyers, so their fleets can put up a fight against even the strongest of your forces. For those more familiar with the lore, along with Zsinj's empire you'll find Greater Maldrood, the Eriadu Authority and Zero Command.

In the non-Imperial parts of the galaxy, you'll also be able to find appropriate forces defending their planets with their own unique ships. Chief among these are the Ssi-Ruuvi and Hapans. How far we take this depends mostly on the limitations of Sins, since we're prioritizing stability over having more militia. 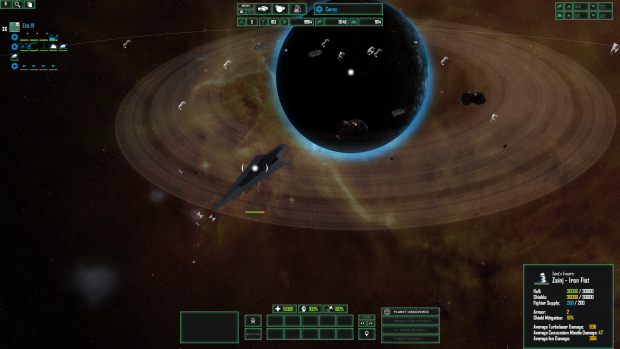 These starting forces aren't the only things you'll encounter while exploring the galaxy. There are also random events and structures (like Centerpoint) which will help to spice up your experience. More on those later.

Centerpoint. Not what my early game fleet would want to see.

Huh, this is something I've always wished the based game had, better neutral planet defenses.

I'm sorry if this is answered somewhere else (I haven't found it though).

Will there be/are there canon (or legends haha) maps included with the game? This is one of biggest gripes with other mods that the maps feel very light on canocity (if thats a word). For other star wars mods, I've had to put together my own maps. I'm not as familiar with the EU post RotJ and I'd rather not have to put that together :) plus I know the quality work that you guys did in your EaW mod.

Any chance that you guys could make these Warlord executors capturable? Primary reason is since we have examples of the NR using old Executors like the Lusankya.

This could be a thing where you can either destroy it or use several boarding party abilities on it at once and maybe if you're lucky, you can have your boarding ships not die and have them eventually send over enough troops to capture the bridge