At the start of the game, just about every NPC and enemy in the game is stronger than you. Your starting strength is that of a weak civilian. You have one character and a rusty sword and no money.

The game balance I would like to aim for, in terms of levelling, would be something similar to Gothic 2, if you've ever played it. There is no level-scaling in kenshi, as it goes against my tenets as a game developer and ruins an RPG. So everything and everybody in the whole world is at a fixed level and does not change as your own characters level up. The player must avoid the stronger enemies until he is ready to take them on. This can be done by being careful not to make certain enemies in the first place, and avoiding the most dangerous map areas. Likewise when you are stronger and find things are getting easy, you can always find something more dangerous to do.

For a game like this you need to reconfigure the way you think about it a little, as all games seem to follow the same fundamental conventions and have given players bad habits. Most notably the fact that players are always more powerful than every single enemy, and the player is always made to feel like the world revolves around him.

Imagine you have been put in this situation in real life. Its not recommended for anybody to wander the dangerous desert alone, let alone someone with no skills. You need to join a trader caravan or something where you can travel safely in a group, and it will earn you money too. When you get into fights the other guards will back you up and do most of the work, set your character to focus on defence and he should stay alive. His defence skill will go up rapidly until he can hold his own and start hitting back. 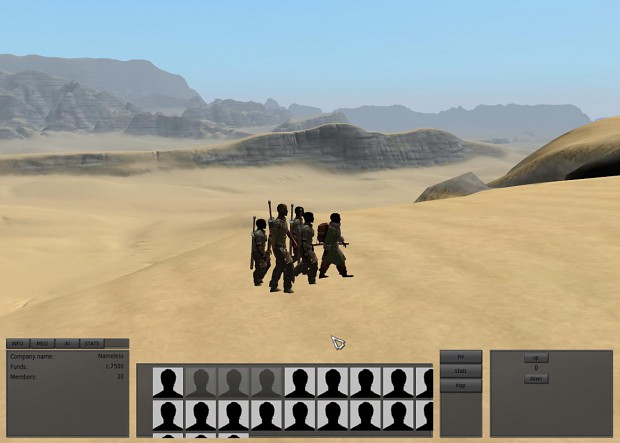 Once you have a little money you can start recruiting some more characters. Use your stronger ones to protect the weaker ones until they can hold their own. Give them first aid when they go down and keep them alive. Be cautious and grow. You don't have to win all the time, if a character looses a fight, he actually gains more experience from it. After all you never forget a lesson if it involves getting stabbed.

Recruiting new characters will be relatively easy, but just increasing your numbers won't solve all your problems. You have to feed and equip all these people, pay for accomodation when they need a safe place to rest and heal. Its all about striking the balance and doing it the way you like. You can nuture a small elite group, or maybe just throw a large group of people into battles and just keep the survivors.

Freedom to the player.

Sounds all the more logical. So is there some sort of permanent damage like lost limbs in this or will every damage be healable eventually?

Yeah, lost limbs will need to be replaced by expensive yet cool-looking robotics, but this is a feature that won't be in the game for a long time.

Oooh, Robotics. I was not completely sure if this was a wasteland in a medieval setting or if this is like Fallout or the titular Wasteland, which is a really good thing.

Haha thats awesome, I look forward to my "main character" being a bad *** cyborg commander

I also plan eventually to have cannibals and man-eating creatures that kidnap people and eat them one limb at a time until you rescue them.

OH my god, that's so sick and at the same time absolutely AWESOME!!!!

Ohh I just noticed, is that a rifle in the leaders hand in that picture? :D

It would be cool if you could get the feel of fallout 3 in this game. Like walking around every corner and finding something scary or interesting. Fallout 3 has many strange things that make exploration very fun, i hope you could add something like that.

I'm not sure what kind of enemies you will be adding to this game but I would recommend some sort of mutated creatures or lurking monsters.

What a great idea looking good

Thats because you don't know what "early development stage" means

what an idiot C.C

Greatly anticipating this one. :D

Just wondering some stuff, though; will we be able to make buildings of our own? Like found towns and stuff? Or just buy what's already there?
Also, wondering about how detailed the interactions and interpersonal relations will be.
Also also, you mentioned that buildings won't churn out faceless grunts, and that everyone starts out basically on an even playing field, barring their level and such. How will new npcs coming into play be handled? Like will there be a building for that, or people being born, or travelers from distant lands, or what? Or a finite number of people and eventually you can kill everyone else in the world and be alone?

Sorry if that's too many questions. XP

..also when can I preorder? :P

You will be able to build your own buildings and outposts. Birth and immigration will be the source of new people, though it will be a very slow rate and the population can thin out badly in times of major war, entire factions can be wiped out too, creatures made extinct.

You can buy the game after first release in august.

Oh, that sounds very cool. Does that mean aging will be a factor? Will our character eventually die of old age, and have to be succeeded by his child? Or is it just for new births/npcs?

The thinning things sounds neat, though.

And that's sooner than I expected, to be honest. Sweet deal.

Also, the map looks absolutely massive, but how dense will the stuff in it be?

Hey wait. You have a ModDB page? When did this happen? :p