In Development is ending the year with a series of updates!

There seems to be a set schedule for students in college who are working on mods. The first half of December is meant to be dedicated for final exams, and once the students go on break they are supposed to continue work on the mod.

I have not done that.

Instead, the second I arrived home for the holidays I played New Super Mario Bros Wii with my whole family, along with a little bit of Rock Band. I chose to spend my time with my family instead of locking myself in my room and coding for my mod.

So, because of this, I don't have too much coding work to show. However, that doesn't mean that I haven't done anything for the mod, since work on the mod doesn't just mean coding. Over the course of 3 days, we'll show you something new that has been accomplished in the mod, but only for a particular category of the mod. For example, if we show you level design one day, the other two days won't involve level design, however this does not mean we'll be showing all of the level design that we current have.

Without further delay, here is the update for today. Consider this more of an "Appetizer" than a full on update, since I'm saving the features we have the most information about for last. 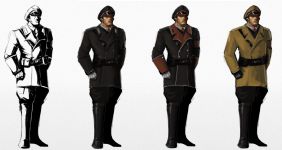 
The leader of the Nazis. He wants nothing better than to destroy Normandy's beach with his Artillery cannon. Anyone under his command has no choice but to obey his commands, even to their deaths. His weapons of choice are twin Gatling guns that he holds under his arms; they tear to shreds anyone that dares face him. His face looks very similar to the Sarge's...in fact it's very similar to quite a few people's faces...

Check back tomorrow for an update with a little more "meat".

There a Nazis in In Development? Cool!