Zombie Panic: Source v2.1 has been packaged and sent off to Valve and we're now all eagerly awaiting to play with the community. Keep an eye open on 2.1 Steam Update!

It is our pleasure to announce that earlier today we sent v2.1 of Zombie Panic: Source to Valve and are eagerly awaiting it's proper release over the steam servers! We are beyond grateful for the support the community has shown us these last 3+ years. The current team working on ZP:S and this includes the new playtesters have been at it daily with multiple tests per day 7 days a week. With v2.1 our goal was to provide as promised a more stable, enjoyable, and balanced game and we're quite confident that's exactly what we've done. We begin work on v2.2 in a few weeks to add in more features, content, as well as further improving the existing game.

For veterans of ZP:S who aren't actively playing these days I also wanted to make a point to impress that with v2.1 we made sure to bring back survival horror to the game that was lost with the popularity of the mod and box camp maps. ZP:S is once again the game that it was meant to always be due to Sammy's unique system and we've also gone through a number of our favorite maps updating them visually and fixing minor issues that may have turned off players.

Check out the Media and Changelog below- 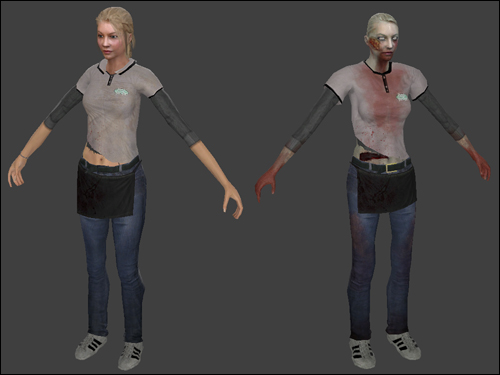 + New waitress (human and zombie)
+ New Main Menu Screen
+ Fixed Knockback
+ Prevent zombies and humans from blocking other zombie/human melee attacks
+ Recognize kill assists
+ Headbobbing is now present in the game (it's on by default, but you can switch it off in the multiplayer options)+ Add baseball bats to fgd and random_def entity
+ Official Maps Flagged.
+ non-whitey zombie claws
+ zpo_tanker update
+ zps_silence update
+ zpo_harvest update
+ zpo_biotec update
+ zps_underground added
+ zps_thrillvile added
+ zpo_murksville added
+ zps_ruralpanic added
+ Carrier roar + roar highlight feature added
+ Weapon & ammo scaling feature added (zps only)
+ New ammo weight system (30 lbs is the max)
+ Plant IED feature added
+ User who planted IED can pick it up whilst planted+ Player who planted IED if killed loses ownership of IED and it becomes a phys object again for others to pick up+ New waitress vocals
+ Infected players can't talk or drop/pick up weapons/items in 2nd phase of infection
+ Infected players can't deduct zombie lives
+ Can choose playermodel now
+ First person spectating added
+ New keyboard model
+ New Winchester reload
+ New yellow border for donors and green for playtesters.
+ Keyboard attack produces random messages
+ Minor bug fixes
+ Feed-o-meter is yellow while being drained.
+ Sv_gravity changes physics objects' gravity (Not only players)
+ If you're nearby a grenade that explodes, it shakes your screen a bit (similar to the IED screenshake)+ If you're by yourself and if you have sv_testmode 1, you spawn as the carrier if you join the zombie team+ There's a delay to suicide if you use the kill command (5 seconds)+ New entity: logic_end_game.
+ Barricades take phys damage
+ Spectators/Players in lobby are unable to talk to living players to prevent ghosting (team chat is still available)
- weapon_hammer is removed
- zpo_deadblock removed

I would also like to thank NuclearFallout for their incredible support. If it weren't for them we would not be releasing v2.1 this month. After having to switch SVN hosts and manage other issues that would have delayed us for a considerable amount of time the NFO support staff made sure our playtest server was up and running with 24/7 support. I can't thank em enough and strongly believe them to be the best out there.

See you in game!

Good to see your updating this awesome mod! Should be made into a game :D

Contagion-game.com the spiritual successor to ZPS

Wow that looks awesome, al be tracking it on moddb!

Just to let you know Tatsur0, just saw this comment again 3 years later haha. I was luckily one of the few people that got a code when you were giving them out on the group page. :) Played it a bit and so far so good. Keep it up!

Sorry if I reply to the above comment but it's the only way to add the comment on the first page and be visible...

Great to know you have updated ZP:S! Thank you!

Btw, I recently had to switch to a Mac... Do you have any plan to release it for such a platform (soon)?
I don't have any idea of the work required to achieve such a porting, so am I simply asking...

Again, thank you and keep up the good work!
P.

This is getting better and better :3

one thing about the "Waitress Jessica" update: her arms are a world too long :P did a little gif, couse pictures tell more then 1000 words. ;)

beside that, great model and love the details :)

I also noticed a few differences between the zombie model and the survivor model.

Its still kind of freakishly deformed even after shortening the upper arms.

why the heck the hammer was removed ?

I guess its because it looked too much like the barricade, and was pretty useless

From my understanding Deadblock was removed because it was old, unbalanced and broken in some spots. Plus no one played it that much.

Perhaps someone will remake/fix it up in the future :)

Finally, non-whitey zombie hands! I knew this would eventually happen

if its released where is the download link?, the topic dosent make sense.

"earlier today we sent v2.1 of Zombie Panic: Source to Valve and are eagerly awaiting it's proper release"

We have to use steamworks to compile our patch (quite large) then ship it off to Valve who then needs to release it to the public. I would wager a guess that it may not actually be available till Monday but they've surprised us before.

Updated Changelog to reflect changes that we're overlooked when updating changelog like the ability to pick up your own planted IED, headbob(can be disabled in options), planted IEDs detaching when owner dies, and more.

Not played ZPS in ages so I'll be sure to start playing again!

(héhé that why ime and my friends use xfire, the gaming hours is accumulated since 2004)

is this the latest version?

Waiting on Valve to update the servers. They got it Friday but they're quite busy so it's possible we won't see it till Monday. :/ Though any supporters wishing to point out that the updates live would be appreciated :D Checking my Email every 30mins.

Achievements didn't get done in time for the update sorry :( (hopefully they will be ready for 2.2 )

I recommend you to update the image gallery on your steam page. The current screenshots do not fit the widescreen format of the box and a nice trailer on the beginning would bring some life to it, too.

A g3 for a new weapon would be pretty nice

One worthy update a year isnt so bad i guess.

Excellent! I was wondering when you guys were going to update.

Thanks to everyone in the ZPS team for making this great mod. I found it almost 2 years ago (March 18th, 2009) and it cost me only about $5 to get the requirements to play it (HL2:DM). This mod alone is pratically the main reason I ever found the amazing thing called Steam and quite a few of my best friends. The slow updates have put a serious dent on my time played in the mod, but I still continue playing nonetheless- this makes me even more happier. :D
Very special thanks to the mappers/ZPS Devs that made zps_rualpanic. If anyone remembers playing ZP, it's a remake of the Haunted House (zp_rhs22), and quite a good one. :D

i really hope they optimized the mod, i mean those lags when you get shot in the head (as zombie) or you try to shoot on the head with magnum, and no i dont whine cause i cant shoot (im actually 'sharpshooter') but its just that there happens lags that for example whitey might suddenly teleport himself few inches to the side from where he was and be much more near you. sorry if misunderstanding me, im odd at english today, lol.

Thats called server lag. It happens. Try and find a server with a better ping rate

Or maybe it might be his Internet connection. Either way, it's not the fault of the Mod's Developers and blaming them is immature.

Very cool! Been waiting for this for some time.