It was exactly 2 years ago today that Zombie Panic: Source was released to the public and we have ModDB to thank for a lot of its success...

It was exactly 2 years ago today when we released Zombie Panic: Source to the public. We held an IRC release party that was insane with over well over 1000 users coming and going and was very exciting for all of us involved. We have a lot of exciting things to show you into our 3rd year but for now I'd like to keep things simple and wet your appetite a bit.

Below you see 2 sample images from a comic Henital Gerpies a well known and respected member of the community is working on for us. These are incomplete and I have quite a few more. But this should be enough for now and I will provide a background shortly but in the the meantime we hope you enjoy these- 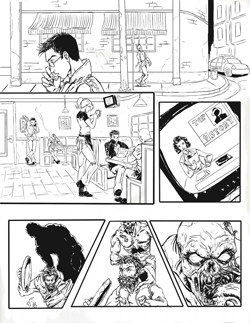 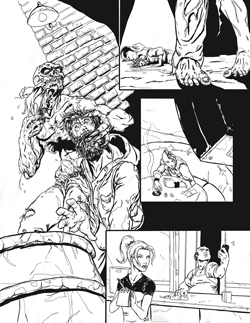 It's been a busy year for ZPS with numerous patches and loads of new content. We're currently working on fixing up existing work like promised, improving on animations, replacing out dated work, but I can't help it when it comes to adding new stuff. We've got another 2 player models we're trying to get in-game, new weapons, new music, and new features to improve balance and make playing zombie a more enjoyable experience. I spent most of Xmas working myself but was able to sit down with my kids and open gifts under an origami xmas tree I made. Overall it was a good day and I hope you are all enjoyed yours too.

For those that missed it the ZP community had a chance to view an old tribute to ZP for the holiday season. Enjoy a fan made Xmas themed ZP film done up by the one and only OkeiDo (Give him a lot of crap for not working on a new one for this year)-

Also as you all already know ModDB is holding their Mod of the Year Awards and as some of you may recall ZP:S took home Best Upcoming Mod of the Year in 2007 and just barely missed our chance at Best Mod of the Year 2008. But in 2009 we introduced new weapons, new player models, new maps, new features, and a new game mode. Even with all our additions we've chosen to focus on improving the gameplay, quality of our assets, and communication with our faithful and enormous community.

It would give us great pleasure to take home the trophy that was nearly within our grasp last year but of course it means requiring all of our fans to vote for us. ZPS has been in development for 5 years, and today we turn 2. We've accomplished so much with the support of our community which led to awards, PC Mag coverage, corporate interests we turned down but were still very flattering (sorry NDA), and being one of 5 mods to be released via Steam for the very first time. We spent a large part of our free time working on ZPS so while I won't insist all of the attention wasn't deserved we are grateful for it all. We hope you see the work we put in to the mod and now here's your chance to once again determine if we deserve Mod of the Year. If you believe so please vote for us-

Voted! You guys made on of the best HL2 mods ever!

Best congrats for that. I voted for your mod.
The only pitty thing about your mod by now is that it has been overrun by ugly simple maps. Nearly all servers are playing crap maps instead of the good high quality zps maps. It's a real shame..

If only there were a way to ban all those cabin/lake/church maps...

agreed on lake maps, i hate them so. as for cabin, we only really need 1 of them to have all of them. and as for church, i have yet to hit a church map.

you guys are rediculous, those are by far the most awesome maps on ZPS

Happy Birthday to you,

I vote for ZPS. It's one of the best hl2 mods ive ever played. the only thing i don't like about ZPS is that there is no scoped rifle. you guys should come out with an old bolt action rifle for the game. that would be awsome!

Happy B-Day ZPS! let's make the next year even better

That comic is quite cute. (jk)

I remember staying up all night for it to release and playing that same night. I was so amazed. Can't believe it's already been 2 years. Happy anniversary!

Agreed. To be honest, I prefer HL1's Zombie Panic, it just felt...better. Shot registry was no problem also. :P

Its probably because HL1's code was stable compared to newer source code.

Wow, its been 2 years already, I bought my computer 5 days before the release of this mod, which I actually downloaded the day it was released since I bought Cs-Source and HL2 with my comp, thats crazy, its already been that long, time flys, now my comp is out of memory and I cant even play Halo pc without a crash, lol

You know, that comic reminds me of the resident evil outbreak series. In the first scenario, all the playable survivors start off in a bar :D