For Windows AND Linux!

Simply unzip into your ETQW Directory. There is a sample shortcut included which shows you what command-line arguments you need to starts Wheels of War in standalone. 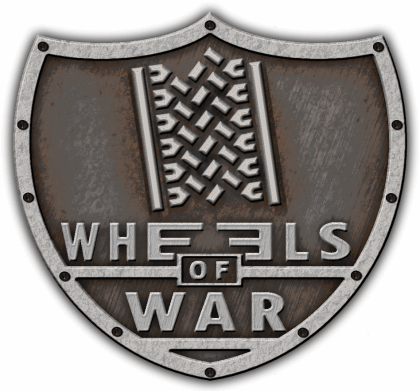 Wheels of War
With Wheels of War, we want to bring back the awesome feeling when playing Carmageddon all those years ago - the initial racing, the wasting of other cars, collecting power-ups, insane stunts and running over zombies. There will be powerups/powerdowns, a credits system, upgradable cars (via armour, offensive, and engine characteristics), checkpoint style racing (i.e, ability to roam), destructable cars, and a stunts system. Note that this is not a port/clone or rip of Carmageddon. We are taking it's single player concept, evolving it to multiplayer, and creating a whole new environment for it to exist in.
A game design document has been released to the public on the website focusing on our Free For All Campaign game mode here.
We have many other modes planned, but our first alpha release will focus on this one.
Features of Interest (Note: All are not available yet, but will be implemented in due course):

* Initial Version.
* Ranked stats servers.
* Hud shows current time, best lap, last lap.
* Hud shows number of completed laps, instead of current lap as per DM mode.
* Scoreboard shows best lap instead of XP.
* Vehicles do not collide with each other.
* No credits awarded for laps/checkpoints.
* Powerups are disabled.

* si_wowStatsGUID
* si_wowGSPLicence
* Ranked Server cvars are not locked, but if they do not conform to regulations then stats are simply not sent.
* Only Dedicated Internet Servers and lan servers which have forced auth.

EARTH, 24 June 2008: The Carnage Council is proud to announce the public release of Wheels of War Alpha 0.2!

Hey Guys, great news - version 0.2 has been released! It features a small amount of bug fixes, three new vehicles, a whole new 'Championship Racing' game mode, 5 racetracks for that racing mode (which include the 3 for DM Campaign matches), and web-based stats in the form of a global best-lap leaderboard.

It became apparent the zombies, in-game upgrades and stunt systems were going to take a while to develop. Web-based stats were always on the cards for a later inclusion, so this new race mode lets us examine how that works whilst giving you another reason to play Wheels of War. We think it ties in nicely, hopefully you will agree!

To get on the global leaderboard at Wheelsofwar.colsoft.biz, you need to play on a RANKED RACE server, and complete a lap within the time limit. Every players best lap during that race is recorded and put up for all to see. It's that simple! The stats website is going to be continually developed over the next few weeks as more ways of conveying the information are realised - if you have any suggestions, post on our forums.

Server admins wanting more information about how to make their servers ranked can come to our IRC channel (#wheelsofwar on irc.quakenet.org) or post in our general forum on our official website at Wheelsofwar.co.uk.

We are always on the look out for download mirrors and server partners. If you are willing to host a Wheels of War server, be it Deathmatch or Racing, get in touch and we can discuss how to get Ranked status or even get in some sponsored advertising on the stats page if you help us get the word out :)

Thank you, and have a good time racing!

Installation Instructions: Simply unzip the downloaded file into your ETQW directory. It will create a /wheelsofwar folder and also a Run Wheels of War shortcut. The shortcut will show you what command-line arguments you need to run the mod. Specifically, they are:

The Wheels of War Development Team

Time for an update after our Alpha Release. New vehicles, skins, and zombies!

We have released a public alpha of Wheels of War to gather feedback. Windows and linux are supported with the 0.1b patch. Go and unleash the carnage!

Want to know who's touching who at Wheels of War, read on for all the Hot Details!

Project Lead Domipheus and Deputy Lead NoSoup4U have been interviewed by Splashdamage over at the official Enemy Territory:QUAKE Wars Community site to...

Here it is! Alpha 0.2 for linux and windows. Unzip into your ETQW directory; there is a 'Run Wheels of War' sample shortcut which shows what arguments...

Wheels of War Alpha 0.1b Patch

This is a patch from 0.1a to 0.1b. It allows for windows and linux clients/servers to all interact happily. This should be downloaded and installed by...

Wheels of War Alpha 0.1a

This version is a very early alpha release. We expect that you will find bugs, and you may feel that the gameplay is not up to the quality of which you...

Some footage from a test game we had a week ago. I'm no editing expert so sorry if the movie doesn't look/sound that great. If you'd like to help us in...

On Arch, not sure why... I tried in the installation dir and my personal one, and get this error.

Thanks so much for this!

Looks great, but can't find any servers so unplayable.

How do i Install ETQW mods?

Well, I should say, how do I play this mod. I have it installed, but I cant seem to create any servers :(

For what it's worth, I'm working on a Xbox Live Indie Games version of Wheels of war, which has been in development for several months. Limited information is available at Level13games.co.uk

Personally for me, i'm looking to see what Rage has to offer in terms of modding capability to see if we can revive the effort we put into this. But just now, development for ETQW has ceased.

Wanted to make a map, but editor was difficult to work with. Also waiting for Rage.

Multiplayer
Tags
Embed Buttons
Link to Wheels of War by selecting a button and using the embed code provided more...