Whoah. I can't believe it's already been 2 years.

I guess it's true that time passes faster when you keep busy. I certainly didn't feel those 2 years pass. So much has happened for me, and I am sure things have changed for you as well.

For those who do not know, I have spent these 2 years working on the game Insurgency

Since the game's release we have been constantly releasing free updates and free DLC with new maps, new weapons, new game modes and improved content, the game has evolved in so many good ways, and it's been a blast to work on this, it has many of the things I love in a game, mainly tight gunplay and intense action and effects.

But that's not all I've been doing during this time, many of you have been sending me messages and posting comments, asking questions about Chapter Two and the future of Underhell. Some of you may think it's dead. 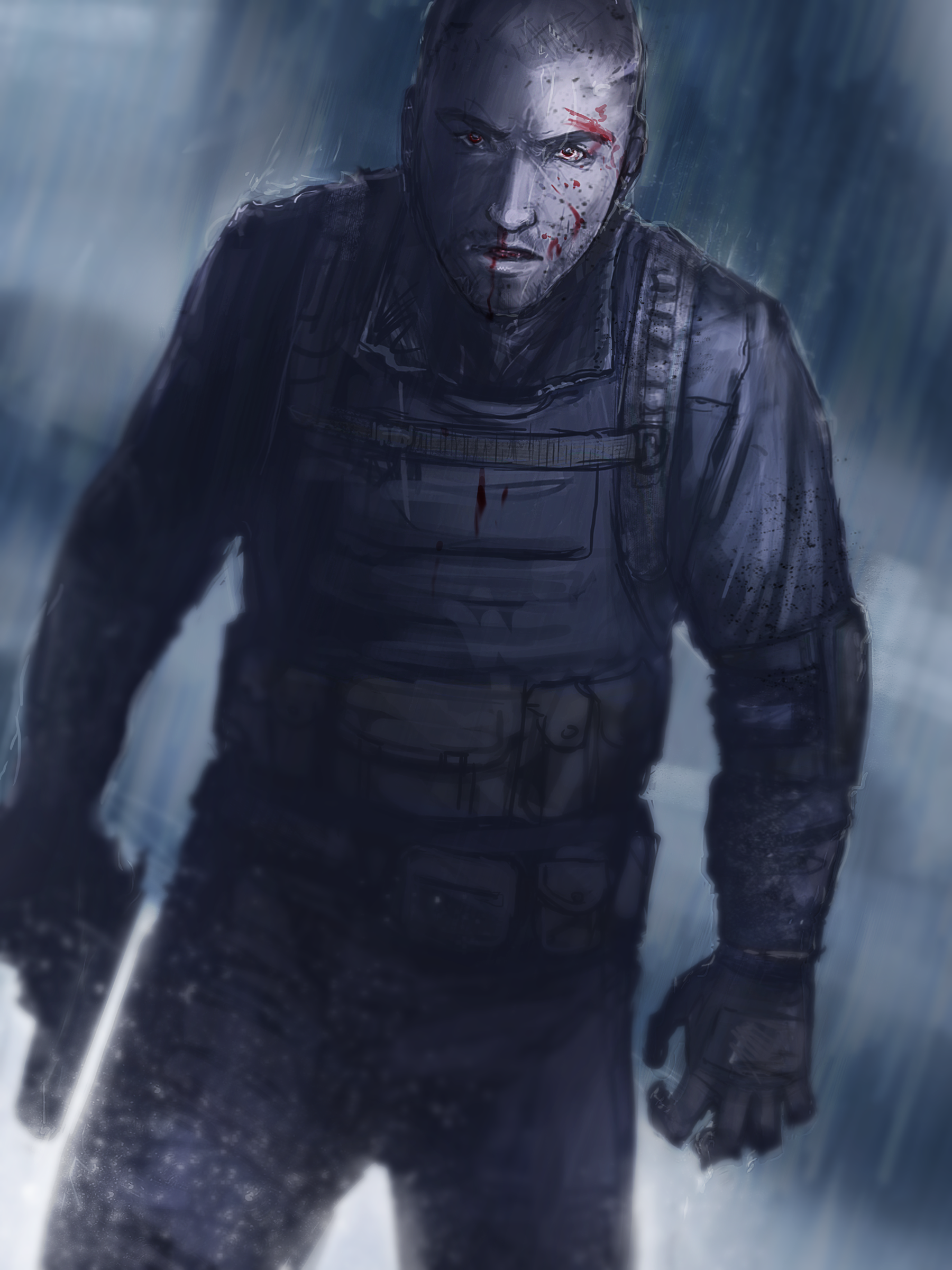 Underhell has never been developed in a traditional way, I can realize that now that I am part of an actual game development team. It's been created in a very specific way which allowed me to make sure all the aspects of the game matched a certain style and fit in a certain way, and even if I had to make sacrifices or let some things go due to lack of personnel or time, the formula has worked so far.

It just takes a lot of time.

And that's really all I need from you at the moment, some of you have been asking to send donations, but I would rather not. It is true that from now on I want to be able to pay every team member that will work on this project, and therefore the financial side of things is a new concern, but this is all part of the process of making a game, and it will be dealt with in due time. 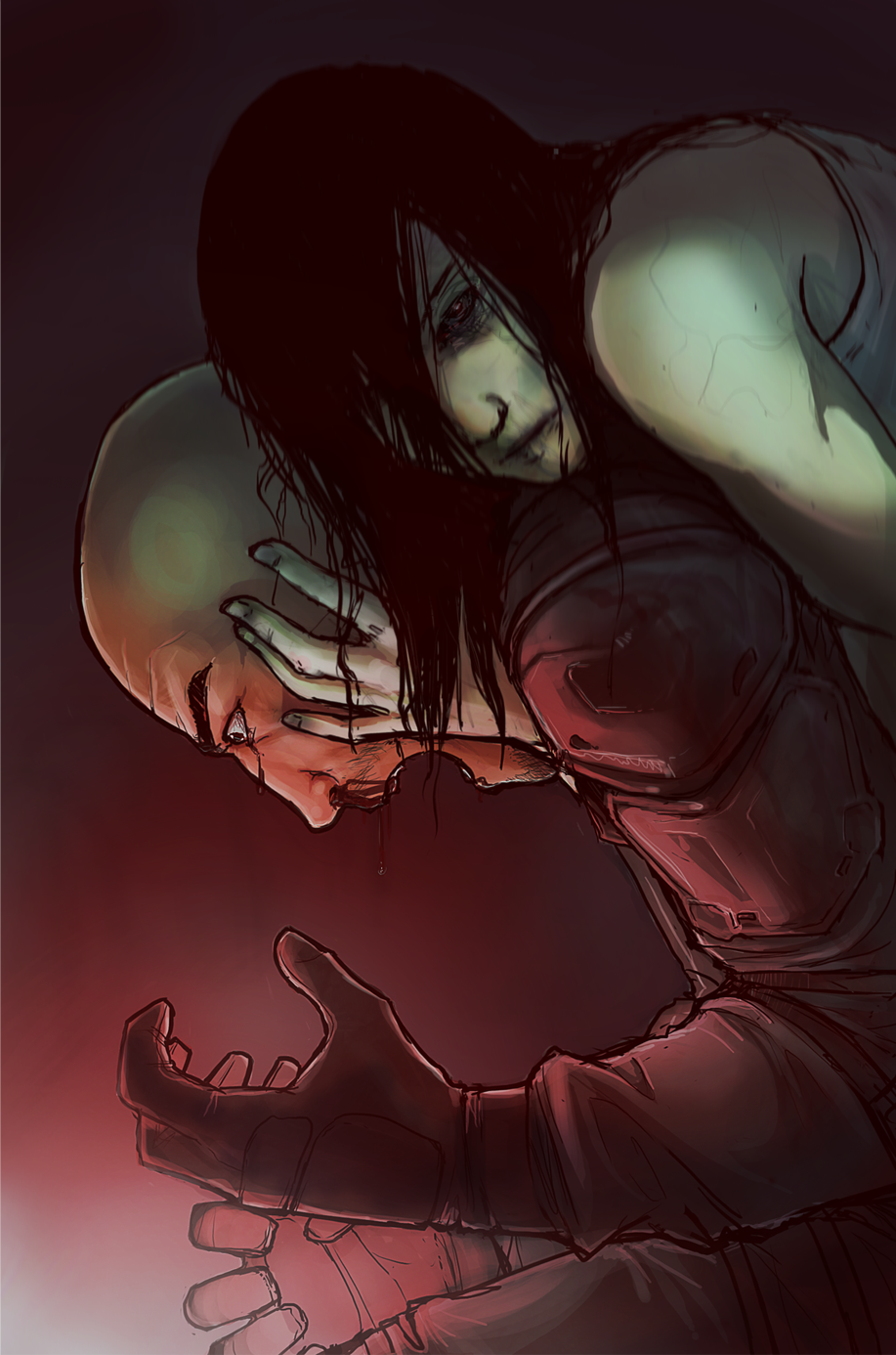 All this cool concept art has been created by Paxilon, who I have decided to hire after seeing the art work seen above. She was able to bring to life designs for future characters that I have had in mind for years now. There is plenty more of Character Concepts, but some of them would be spoilers, so here are a few of the non-spoiler ones. 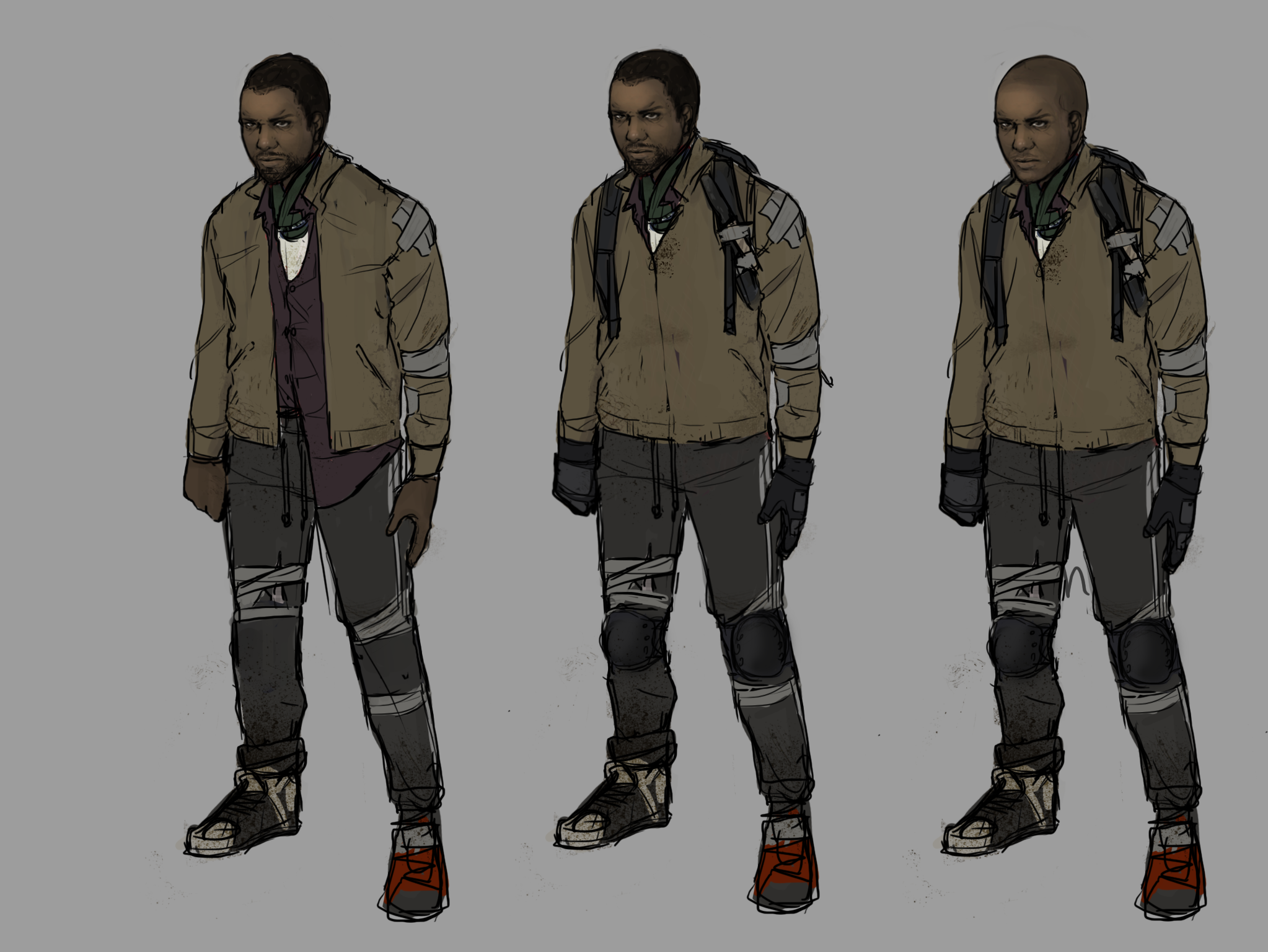 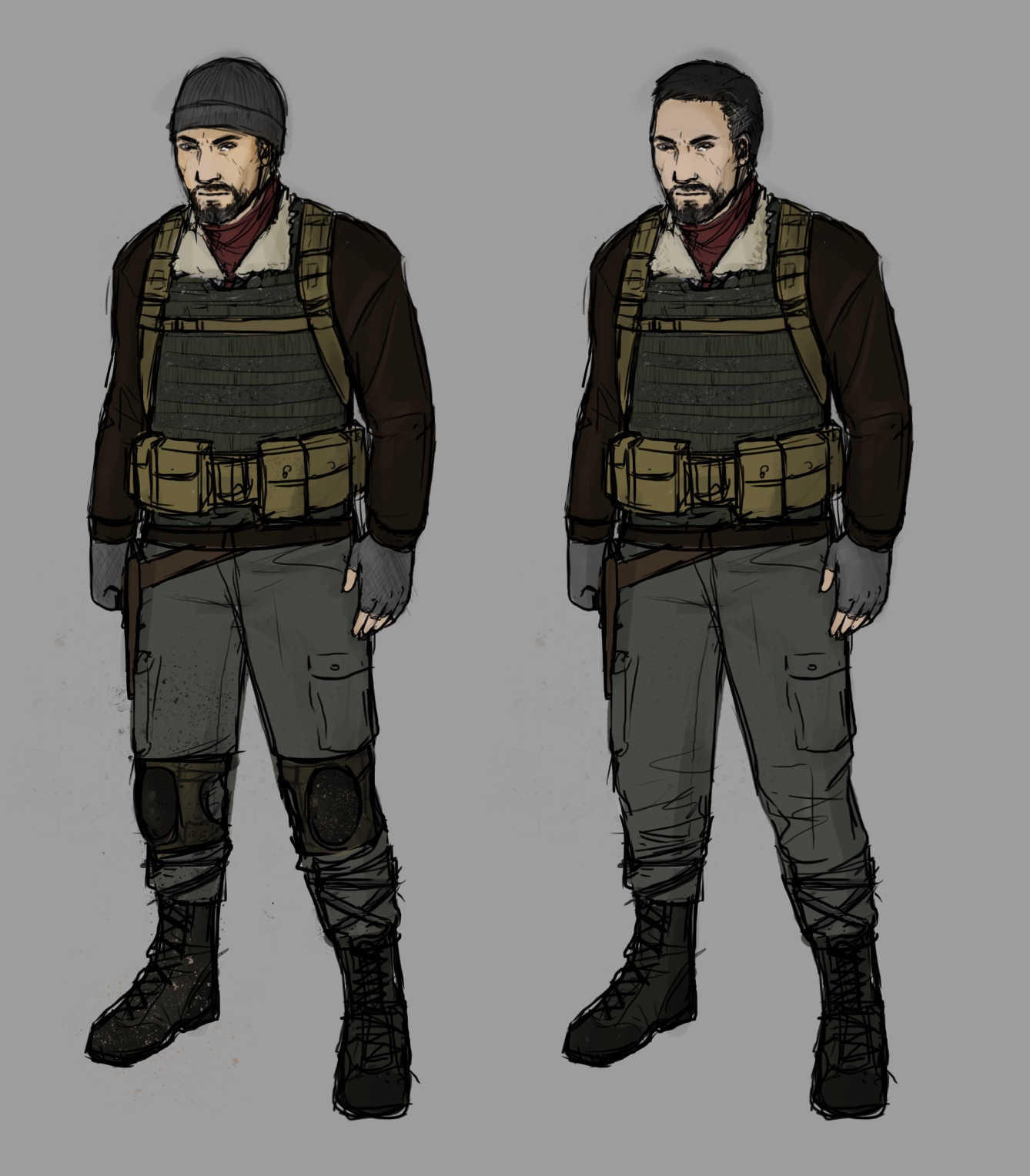 I've said this many times, but after a while people stop believing it, so I have to say it again.

I will not stop working on Underhell, and Underhell is far from dead, and as long as I am alive I plan to keep working on it whenever possible.

News are and will be scarce for this, simply because I do not like to post news when there is nothing substantial to talk about. So it is possible that there will be silence from me and the development during some time, and that's the way it's gotta be until the game has made more significant progress.

Chapter Two is the biggest and largest Chapter of the game, in terms of size and scope, it has the most characters, more environments and quite a few memorable set pieces scenes. I want to make sure it is done right, and I'll take my time and the Source Engine is getting old.

I am developing this in a way that if we were to switch to another engine, we wouldn't lose the work that has been done so far, all these precautions and slow and careful building takes time, so that really is all I ask from you. Time.

I don't work in a AAA studio on this, in fact at the moment it's pretty much just me, and that is the way it's supposed to be for now, so all you can do is wait.

And we all know how hard that can be.

In the meantime, there's another game that kept us waiting which releases today. So let's go play that.

Much respect for this bro.

Indeed.
And jeez has it really been two years?

Awesome to see that it's still going forward somehow. The first Chapter was a real blast in terms of gameplay and atmosphere!

Glad this isn't dead, can't wait to see more progress. Also if you ever need a voice actor for the new chapter let me know through a PM. Good luck on Insurgency and keep up the good work with Underhell!

Well if you would spoil us with character art does that mean that maybe there are some other survivors from Chapter I?

That feeling when you're waiting for this more than any AAA-title out there.

I know what you mean, man. Quite honestly, Underhell and Life is Strange are the only two games that emotionally effected me. I completely forgive the limitations on animation due to the Source engine, simply because the story is so damn great.

I think the worst part of the game was not what happened to Junior, but what Ben had to do at the train. (Trying to avoid spoilers, but completely forget how to spoiler tag)

Just the way he says "Goodbye" makes me choke up. He's so obviously scared, but he knows what he has to do.

I think the story I want to know most is what's up with Terry, and his promise to Ben's father.

Stop developing on this for SourceEngine.
Do Source 2 or Unreal!

Source 2, yeah, I can understand, but Source 2 isn't released really, not in the way he could develop Underhell on it, that is.

It's fine where it is. Source has an iconic feel.

And honestly, most of us players probably don't care much about how it looks. On Source it already looked pretty good, but the gameplay is what made it amazing.

I've played chapter 1 a year back and I still even till this day remember everything that has happened. The locations, the characters (the names as well!) - basically everything that made Underhell good, unlike other games and AAA games (except for Mass Effect, but that's a different story).

It's good to hear that you're doing fine with Insurgency and haven't forgot about Underhell, so all I can say is keep doing what you've planned and don't stop or abandon something till everything is finished. I don't care how long it's going to take, but if it's going to be finished, it will be worth the wait.

Awesome to see an update.

I'll have no complaints if you release Chapter 2 by the end of 2017. Insurgency is tons of fun.

So chapter 2 is on a concept stage? Damn

Was hoping for a release soon for chapter 2, but I suppose we shouldn't be picky.

these screenshots... and this news....
I scream when I saw this on the front of moddb page (of hapiness of course lol), but now I understand your point.

But I want to ask: what are you guys working on really? The Chapter 1 remake or the chapter 2? You never answered that.

Metal Gear Solid 5.
Unless he means Mad Max, for some reason.

To exited for chapter 2, this is one of the best well made mods I have ever played

Just wondering, what about getting it greenlit? As I recall that was in the works a while ago and it would definitely get more people playing Underhell.

Insurgency is a fascinating game and it seems to have a rather large following. I commend you on your hard work!

Sure, we can wait, but at this rate, the epilogue will be released in 2050. Ain't got time for that!

Here's a fun fact: The epilogue is slated to release alongside Chapter 4.

I'll be looking forward to playing Chapter 2 with my good friend once it comes out!
We still reminisce back to the days when we played Chapter 1 and loved how exciting it was. My friend even bought us chocolate bars and triangle sandwiches to enjoy an all-nighter session of Underhell with snacks fitting to the game! :)

Those are such amazing news. <3

I understand everything you say. Glad to hear that things are still good for you. I shall wait for the future!

Thanks for saying this is not dead, I just finished the first chapter and it was awesome!

Allow me to squeal in an unmanly demonstration of hype

Yes its not dead!

I had an issue with chapter 1. on the mid-end of the jail scene-s.
Can someone Spoiler the rest of the story for me?

Two years... I loved playing the game, and I am definitely looking forward to the future.

You are the only reason why I keep coming back on this website.

I'll keep following you, even if it takes more than 5 years. I fully understand the time required, the motivation to work on it on full-time scale and so on. It's hard. But when you love something, you never totaly stop.

Can't wait to see you in Insurgency and shoot you with a low-quality M16 or AK ;)

I ain't planning to die until I played all chapters. I'll be waiting patiently.

Chapter 1 is still ******* great and I'm still loving it. I'm probably loading it up again and starting over every three months or so just for fun. If I have to wait two or three more years for Chapter Two, that's fine by me. I've seen plenty of great potential mods by somewhat dedicated authors die down but it brings me joy to see that you're still assuring us after two years that it's going to happen.

Also, SKS ftw. Even if I have to pick up someone else's SKS while playing as Security, SKS all day, every day.

> non-spoilers
> Brian-survivalist concept
Oh god, how I'm glad to see him alive! Almost just as happy to see the entire project alive too.

I miss the game but I will keep waiting

Also, I just want to put an idea in your head Mxthe. Since Chapter 1 did such a great job with giving us so many ways to play out the game in whatever style we preferred. I was thinking that something could be added to that. I think Underhell should have CQC.

do hope you'll be able to finish this project, i know its hard to develop it, but i would say this, if you had to put a price tag on this game, i would buy it in a heartbeat.

and hopefully everyone else as well.

Happy that you're still working on Underhell! I'll wait as long as I need to for it to release. I don't really care if it's complete by the time i'm 20, because all games need time! I'm giving you time. Do well with it.

I didn't realize that it was the same studio, I only noticed the same voice actors.