Introduction:
UAC:Warfare is a Modification for Quake IV made by Raven Software.
Our Modification will enhance the vanilla Quake IV with additional and changed elements. Gameplay, movement and even visuals are changed in many ways to get an improved and intense Multiplayer experience.

The History:
UAC:Warfare started as a DooM³ Modification back in 2004/2005. Our intention was to show the possibilities of the DooM³ Engine to render outdoor environments at decent framerates with more than 4 players.
We had a good amount of stuff coded and designed but the lack of online players made us change to Quake IV. Althought we lost a lot of code and had to retexture and even redesign big parts of UAC:W we never thought that the switch was a mistake.
Small changes like the finally working inline mode for mapobjects or the improved netcode with Playerclasses in Singleplayer made it worth the switch. We now have a rock-solid base for our planned features.

The Features:
UAC:Warfare will add a lot of new stuff into the Multiplayerpart which will be a lot of fun for the players.
Our Classes will add a tactical note to UAC:W. We don't want an overcrowded class-system like in many fortress clones but a few Specialists for your virtual Platoon.
An Example: The Sniper will not only kill players with his sniper rifle and get faster movement.He will also be able to call Dropships with additional ammunition and weaponry. He can scan for Enemies and of course secure open areas with his long range sniper rifle.
The Vehicles are another component in the UAC:W battlefields. Our three vehicles will let you cross the battlefields fast and hit your enemy hard. Transport your soldiers with the APC or conquer an enemy stronghold with the powerful Aegis Antigrav tank. But you can be a smart one and take a quick ride to the next Domination with the fast Buggy and capture the postion.
If the player can't catch a vehicle he will be able to use Transnodes. Transnodes are basically Teleporters between two points which work one-way. We coded a special effect to let the player see where he will end. You can see the Transnode in action if you take a look at the UAC:W Teaser.
Dropships and Air support can be called in by certain playerclasses or stations. They will drop big supply crates with healthpacks or ammo to resupply your troops. You can also get new vehicles if your commander allows it. There will be a limited number of vehicles on each map.

Gametypes:
Beside the basic Quake 4 Gametypes like Free for all we have two new major Gametypes. Firstly the Domination Mode which should be well knows form the Unreal Series. Basically one team has to capture and hold a Domination spot and will get points for the seconds it can hold the spot.
Our Objective Mode will be mission based. For Example the Engineer have to deactivate a Forcefield to make the way free for the vehicles. If the Engineer fails the Aegis Tank squad can't blast away some hangar doors to infiltrate an enemy base. Of course there will be some alternative routes to solve the basic mission. But it will be a lot harder...

Eye-Candy:
Even the best Gameplay is nothing without a good balanced amount of eye-candy. We put a lot of effort into our Terrains and their texturing. With pre-rendered Lightmaps and seamless multiple blendings the dusty Mars surface comes to life. New Shaders and textures like water with realtime caustic effects makes UAC:W an all new gaming experience. The Leveldesign will not so roundish like in DooM³ or have the edge look like in Quake IV Multiplayer with lots of ambientlights. In UAC:W the player can hide in shadows but there will also be a lot of fast-paced gameplay.

Levels:
We havn't planned out all the levels in detail yet. Most Levels will play on Planet Mars. We will have the Mars Surface with a wide open desert, hangars and underground facilities. Even a Monorail and a huge crashsite will be there.
There will be a Terraforming Level with canyons and greenhouses. With bigger releases we will provide new levels. All in all we are targeting up to 4-6 levels that are optimised for our gamemods.

The first release:
No doubt UAC:Warfare is a big project. So we split it into smaller parts. The biggest advantage will be for the community. You will get familiar with UAC:W and get involved in the build process. We will provide you with new content and bugfixes.
The first release of UAC:W will feature Class-system, Domination Mode, Vehicles, two new guns and the Level Mars Assault. No Dropship at this point but Health and Ammo crates.
With this first release the player should get an impression how UAC:W works and plays.
And hopefully will have fun. :)

Another month another UAC:Warfare update

The new crew members brought in new creativeness and we made very good progress with UAC:Warfare last month. Our shiny new Concept artist "Adam Anderson" is painting all day long in his chamber to serve new designs and concepts for our last Level part which we need to release uac:w_test. It will be a Supply depot with Monorail access. Look at the Concept shot to see where the journey will end. In the Chamber next door Chai and michi.be worked together on the "SJ-7 Scout jeep"....and finished it! With this little armored and gunned mate you can drive quickly from one Objective to another. On the screenshot you can see the design process. Starting from the early concept to the in-game model. UAC:Warfares codebase is also progressing and NightWulf concentrates on adding support for wheeled cars while Senkusha animated the Aegis and APC vehicle.
During our spring-cleaning we found a new Irc Channel. So feel yourself invited to #uac:warfare @ Quakenet. 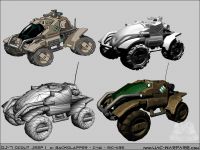 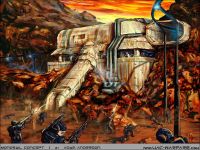 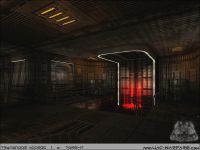 Some changes here @ our Profile

We added the older DooM³ Alpha Build Teaser into the Moddb and more important we updated the Modsections "About" part. So you get the actual...

After a period of redesign we are now back in action with new ideas, new members and new content to make UAC:Warfare a stunning game experience based...

We are close to finish the re-texturing and only need to change some assets. Porting over stuff is the main thing we are doing in our spare time. Time...

The retexturing have just begun! After our switch from Doom³ to Quake4 we started to rework our Mod with the new assets.After having a look at the new...

Watch the short UAC:Warfare Teaser! Its not long but shows moving stuff from a prior DooM³ Alpha Build. ;)

The most promising MOD for Quake4 (originally for Doom3) is now dead.
It's a great shame.

Enemy Territory: Quake Wars, its actually a diferent game but based in Q4 (althoug made by id Software) and its not better than Q4 nor D3, they simply has diferent styles of gameplay, imagine Battlefield fused with Q4, some people may not like it...

i cant believe you people are so poor, why dont buy pirates anyway (illegal copies)... they aer extremely cheaper... And there is no diference exept that they dont have the cool box and game manual from the originals...

i foudn the gameplay of quake4 way to scripted. i felt like it should have been released in 2003 or something. the gameplay wasnt that good. /ducks i think it is a fun game but i expected headshots to be possible and less linear gameplay. i would have given it an 8/10

I am a long time quake player since the days of quake 1. When news of Q4 came out I was hoping for a lot of the traditional things quake has become fameous for. Also, I was hoping for some new fresh ideas for quake fans to be in awe about. The 1 player game has so much in it that could have been used to make a much cooler multiplayer game rite off the bat. It seems as if the multiplayer part was rushed to fit release dates. One good thing is the amount of mod makers out there. And This mod looks like exactly what I wanted out of Quake 4. Cant wait to see a onslaught type mod with q4 gameplay. I dont think ill be playing anytyhing else for a long time :)

That's too bad. I completely aggree.

The reasons are many, but some are that the reason to such poor ratings and sales compared to what <<could>> be seen is because people don't know about the configuration settings that can be done in this game to make it what the devoted players say it is: outstanding.

It's not that they've worked fast - they've spent a while on this MOD. It's been around since Doom 3's development of the MOD, and now it's being converted to the Quake 4 environment.