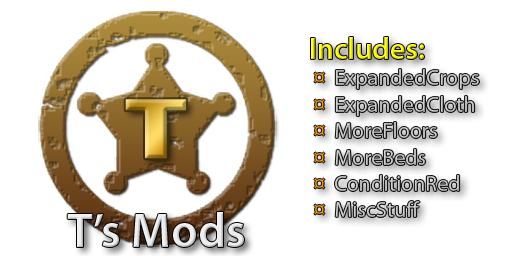 
Here's my selection of mods that I've gradually created and tinkered with to enhance my own Rimworld adventures. There's nothing really unique or revolutionary here but still, I hope you have fun with them!

Updated to alpha 7, woo! With the addition of cotton into vanilla Rimworld, [T] Cotton has evolved into [T] ExpandedCloth. Apart from the existing feature of making cotton plants produce fibre which you must further process into actual cloth, this version also adds new recipes to the tailor's workbench. With them you can deconstruct unwanted apparel - cowboy hats, pants, shirts, and jackets - into cloth! A handy way of getting material for upgrading your sleeping spots in the early game before your cotton processing is up to speed.

The old optional parts of my mod (the ones that kept carpets and beds buildable with just metal) are no longer needed and have been removed. Because of this I merged the new carpet colours previously added by [T] MoreCarpets into [T] MoreFloors.

Finally, the new beds added by [T] MoreBeds have been upgraded to the new stuff system, though they have a minor drawback compared to vanilla beds. You currently get no visual cue as to what material you've built them from, nor do they change colour when toggled as a prisoner or medical bed. This will hopefully be fixed once Tynan updates the core art source and I am able to check how the bed graphics work to handle "stuff" visuals.

v1.4.2 - updated with alpha 7c disease chances. Only one file is changed. If you already downloaded v1.4.0 or v1.4.1 then you can download this fixed file and use it to overwrite the old one here:
{YourRimworldFolder}/Mods/T-ExpandedCrops/Defs/BiomeDefs/ExpandedCropsBiomes.xml 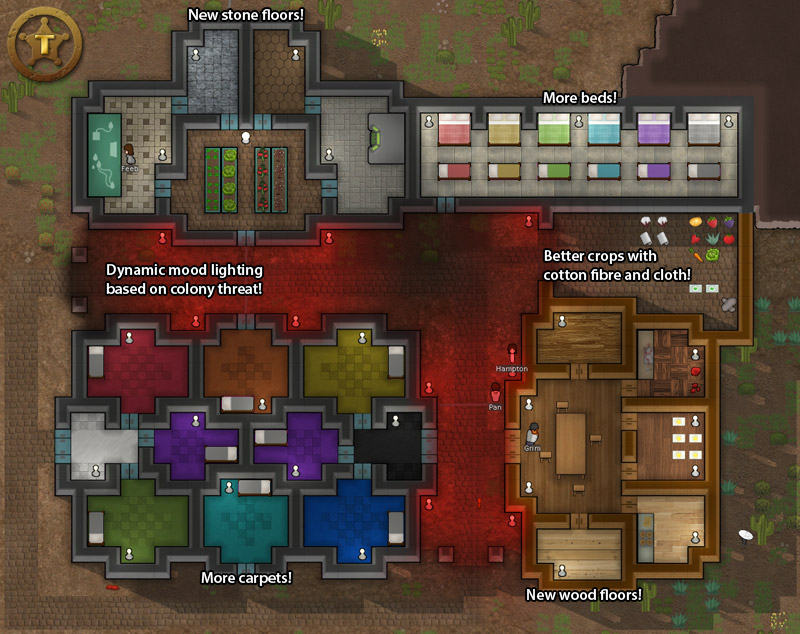 Expands and refines the fruit and vegetables your colonists can grow.
* Vanilla berries split into two types, raspberry and blackberry
* Raspberry and blackberry bushes are separate worldgen plants
* New growable crops - lettuce, tomatoes, carrots
* New artwork for all harvested crop items
* All raw fruit and vegetables have unique colonist thoughts when eaten
* Farming merchant vessels trade in all of the new crops
* Adds a new "salad" meal - needs a lettuce and five other pieces of fruit / veg

Mood lighting for when the going gets tough!
* Alert lamps that glow in various colours depending on how safe your surroundings are
* A threat sensor is needed to provide data to alert lamps - without one, they're useless

Things that don't yet fit anywhere else.
* One new wall type, the scrap metal wall. Cheap and fast to build but weak and doesn't transmit power.

IMPORTANT: Please make sure you delete any old versions of my mods before extracting the new ones!
Filenames may change between versions and other differences may be present. Overwriting an old installation will almost always cause errors.

Once that's done, simply unzip the mod's zip file into your Rimworld "Mods" folder then activate them from the Mods button on the main menu.

I've tried to separate my mods logically so that you can enable parts individually and avoid fuss with other mods, but if you find any problems or have compatibility requests then let me know and I'll see what can be done.

Known places where things could become incompatible between mods:

I know there are a few mods which may do related or identical things - I've not knowingly copied any ideas or work from them. Everything here is original and I've credited sources of artwork that I didn't paint from scratch in the "credits.txt" file inside the About folder of relevant sub-mods. It's not my intent to step on anyone's toes so contact me if there's anything I can do better!

A note about the art

I'm pretty fussy about looks, so I've tried to make sure that all of the graphics in my mods don't stick out like a sore thumb and clearly depict what they are. I think that they merge reasonably well with each other and keep within the current Rimworld art direction. That said, I'm not an artist, so I'd be happy to hear suggestions for improvements!

You're welcome to do pretty much whatever you like with all of my mods. If you use all or part of them in your own mod or modpack, however, please credit me and include a link back to this original mod.

Some artwork may be based on existing sources - see credits.txt within the mod's About folder for links to sources. All non-original source art is at least "free for non-commercial use" to the best of my knowledge.

A full changelog is available in the readme included in the download. Recent changes:

v1.4.0
* Updated to Alpha 7
* ADD: New deconstruction recipes at the tailor's workbench to get cloth from unwanted apparel
* FIX: Colonists who eat salad meals will now correctly get a suitable thought
* FIX: General tidying, fixing, and rewriting for all mods to fit the balance and features of A7
* TWEAK: CottonCarpets removed
* TWEAK: MoreCarpets merged into MoreFloors
* TWEAK: CottonBeds removed - instead, all new beds in MoreBeds now partly require cloth
* TWEAK: BetterCrops renamed to ExpandedCrops
* TWEAK: Cotton renamed to ExpandedCloth

To promote T's Mods and grow its popularity (top mods), use the embed code provided on your homepage, blog, forums and elsewhere you desire. Or try our widget.

Ever get the feeling your prisoners are causing too much trouble? MS-Industries is here to provide a solution: Brain surgery! Keep your prisoners in check...

TLDR: This mod gives modders the ability to have a hair texture render behind a pawn, as well as use alpha masks on hair, without additional fiddling...

The goal is to bring the World of Goshen, literary world created by Dillon B Sapp and Cody Lee Collins, to the Rimworlds

This mod adds decorative (at the moment) vehicles to the game. You can build them for cosmetic effect in your base and make the base more alive. At the...

Slavers is a mod that changes your colonists from calm, reasonable worker ants to badass slavers and pirates. To thrive in this mod, you'll need to acquire...

A better way to monitor your moods